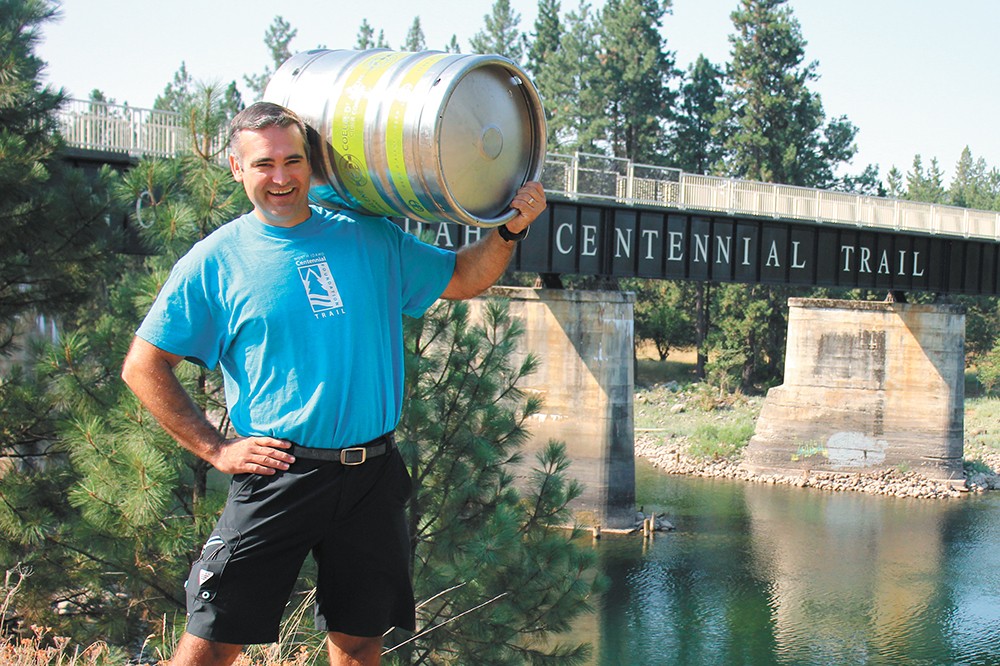 On hot summer days in North Idaho, U.S. Forest Service retiree Maggie Schenk rides her bike to Higgens Point, enjoying every inch of the breathtaking scenery along Lake Coeur d'Alene up close and personal. Perhaps she'll stop for a dip in the lake along the way, or decide to cruise back into town for dinner and a movie at Riverstone. With 14 hours of daylight and miles of the Centennial Trail at her feet, the options are endless.

Those who live in the Inland Northwest are probably very familiar with the Centennial Trail, the 61-mile nonmotorized trail stretching from Coeur d'Alene through Spokane. Some may not be familiar, however, with the North Idaho Centennial Trail Foundation (NICTF), a group of trail enthusiasts who care for and advocate for the 23-mile segment in the Gem State.

On Aug. 11, NICTF is hosting the foundation's sixth annual fundraising event, Ales for the Trail. It features 25 breweries as well as food vendors and live music from local band the Rub. Todd Dunfield, executive director of NICTF, says it's important to keep the nonprofit's fundraisers close to the heart of the cause.

"Our party happens in McEuen Park, and we can see the trail as we are listening to live music and eating great barbecue, sampling great beer. You're right there, seeing what you're raising money for," Dunfield says.

Thirty dollars gets you six tickets to sample 5-oz. pours of your choosing. Extra tasting tickets are $2 each. Some featured brewers include North Idaho Cider, Alaskan Brewing Company and Boise Brewing.

Schenk got involved with NICTF after realizing she used the trail as a citizen all the time. She was in search of a civic organization to volunteer with and NICTF seemed like a perfect fit.

"I use the trail. It's worth it for me to pay the $35 a year as a citizen to be a member, and to promote it, but it's also worth it to me to be a part of the leadership and guidance and maintenance of that trail so it keeps going," Schenk says.

Dunfield compares the foundation to the Lorax, a popular Dr. Seuss character who's known for speaking for the trees. Instead of trees, they speak for the trail, Dunfield says.

And speak for the trail, they do. The foundation ran into a frightening situation last fall when there was serious talk about reducing the size of a section of the Centennial Trail to make room for development near the Spokane River.

"They wanted to rip up the trail, build houses, and make the trail much skinnier," Dunfield says. "We're going, 'No, no, no, think about people with disabilities. Think about moms with strollers.'"

Foundation members went to the Coeur d'Alene City Council meetings and voiced their concerns as advocates for the trail. Dunfield says they think they've stopped them, at least for now. In addition to fighting for the trail, the foundation contributes money to maintenance projects like sealcoating, the process of applying a protective coating to asphalt to prolong its existence.

The money earned through Ales for the Trail will go towards administrative costs, various maintenance projects or, perhaps, hiring a landscape architect to design new features along the trail.

Dunfield believes there are many reasons why the community should care about the Centennial Trail and the NICTF.

"If you go use the trail, you'll have a healthier heart. No-brainer," Dunfield says. "But a funny thing I've discovered recently, if you live near an active recreational site, and you see people running and biking and pushing strollers, there's actually a benefit to you, even if you don't do anything. It just encourages you to do more." ♦