Dom does dumb and does it well.

It all comes down to a thrilling vehicular showdown with a ruthless villain at an arctic base. With a clock ticking and the threat of a weapon of mass destruction looming, our hero races an absurdly modified classic car on a frozen lake, contending with assault rifle-wielding snowmobilers and enemy vehicles firing rockets.

I'm referring, of course, to a sequence in Die Another Day, widely considered one of the worst James Bond movies of all time, when Pierce Brosnan's Bond rushes to save Halle Berry from a melting ice palace in Iceland.

But I'm also referring, of course, to the climax of Fate of the Furious, the eighth installment of the Fast and Furious franchise, when Vin Diesel's crew faces off against a nuclear submarine on a separatist military base in Russia. But that sequence works where the Bond scene fails. There are dozens of reasons why, but many of them boil down to this: Die Another Day thinks it's a Smart Movie. When Brosnan, the suavest and smuggest Bond, hits the ejection seat button to pop his Aston Martin back upright — and dodge a missile — the movie practically cocks its eyebrow over a martini to brag about how oh-so-clever it is. The fact that the sequence is so dumb makes it all the more painful, like listening to a tone deaf singer who thinks he's a karaoke star.

The Fate of the Furious scene also has a car dodging a missile — Diesel, chased by a heat-seeking missile in his Dodge Charger, jumps over a nuclear submarine, and leaps clear of the explosion — and is even dumber.

But the Fate of the Furious knows it's a Dumb Movie. It embraces it, with a climax that also includes skiing on a torpedo and tobogganing on a Lamborghini door. Ludicrous is what the series does best.

So when in the series' newest installment, F9 (opening this weekend), Vin Diesel crosses a chasm by driving on to the cable of a missing bridge, it's exactly the sort of dumb that the series does best.

After all, dumb doesn't mean artless. Making a great Dumb Movie requires craft. It's as much about aesthetics as it is action. Where a Smart Movie seeks sophistication and subtlety, a Dumb Movie is all about being ballsy and brash. A good Dumb Movie relies on broad archetypal characters who either chew the scenery or blow it to smithereens.

But above all, a great Dumb Movie has got to be fast and it's got to be furious. That was the problem with early entrees in the Fast and Furious franchise. Despite the promise of the title, 2 Fast, 2 Furious was far too slow and placid.

The franchise only truly gathered enough speed with its fifth entry, when Fast Five airlifted in a 6-foot-5, 260-pound behemoth of muscle, a titan chiseled from a mountain of pure charisma.

Dwayne "The Rock" Johnson, is such an iconic action movie star that he has the title of another iconic action movie in the middle of his name. By combining Johnson and Diesel, an unstoppable force multiplied by an unstoppable force, Fast Five builds up serious momentum. The faster the Fast and Furious franchise goes, the more it piles on the absurd, the more it breaks free from the shackles of believability, the more you suspend your belief, the more the movies soar with it.

Consider Fast Five's climactic heist. A Mission: Impossible movie heist sequence wants to suspend you in suspense, to make you sweat over every errant drop of sweat. But the heist in Fast Five is a comic subversion of the concept of stealth: It doesn't open the bank vault, it rips it from its foundations of the police station, and turns it into a wrecking ball that demolishes cop cars and store fronts through the streets of Rio.

And our hero is fine, of course. Diesel can plummet off a cliff and brush off the ensuing car wreck, like Wile E. Coyote accordioning back into shape after being crushed by an anvil.

So try to find plot holes if you want. Nitpick about the infinite airstrip runway length of Fast & Furious 6 or the airspeed velocity of an unladen bank vault. But you sound like you're tut-tutting Space Jam for not adhering to the rules of NBA playbook.

This is a series where The Rock removes the cast from his broken arm by simply flexing his bicep, like he's Johnny Bravo or something. Die Hard couldn't get away with that. But somehow this franchise takes what is basically a Cartoon Network gag and turns itinto a scene that makes audiences cheer.

If there's anything in this series that seems uninspired — at least at first glance — it's the dialogue. It doesn't have the Joss Whedon-y pop-culture quips of Marvel movies or the Shane Black snark of the Lethal Weapon series or even the puckish puns of the Bond flicks. Instead, the Fast and Furious flicks are filled with almost all of the sort of generic chest-thumping machismo banter you'd hear from bros on a Call of Duty Twitch stream. ("Ride or die!" "Not good!" "Hell yeah!" "Just like old times!")

When Diesel delivers his umpteenth variation of "I don't have friends, I got family," it's corny, cheesy stuff, delivered with the deep gravitas of a movie that feels it's the most insightful thing in the world.

Yet it works here, right down to how the word choice shifts from the grammatically correct "have" in the first half, to the more blue-collar "got" in the second half. It's maybe the one part of the crazy series that feels real.

It's as heartfelt as when a high school coach addresses the whole team at Godfather's Pizza after their final game of the season, choking up about how much the guys meant to him. It works not because it's an eloquent speech — it's not clever, or particularly profound — but because it's not one. It's straight from its big, dumb heart. ♦

F9 The Fast Saga is not showing in any theaters in the area. 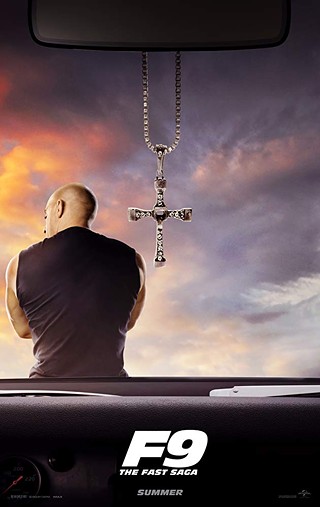