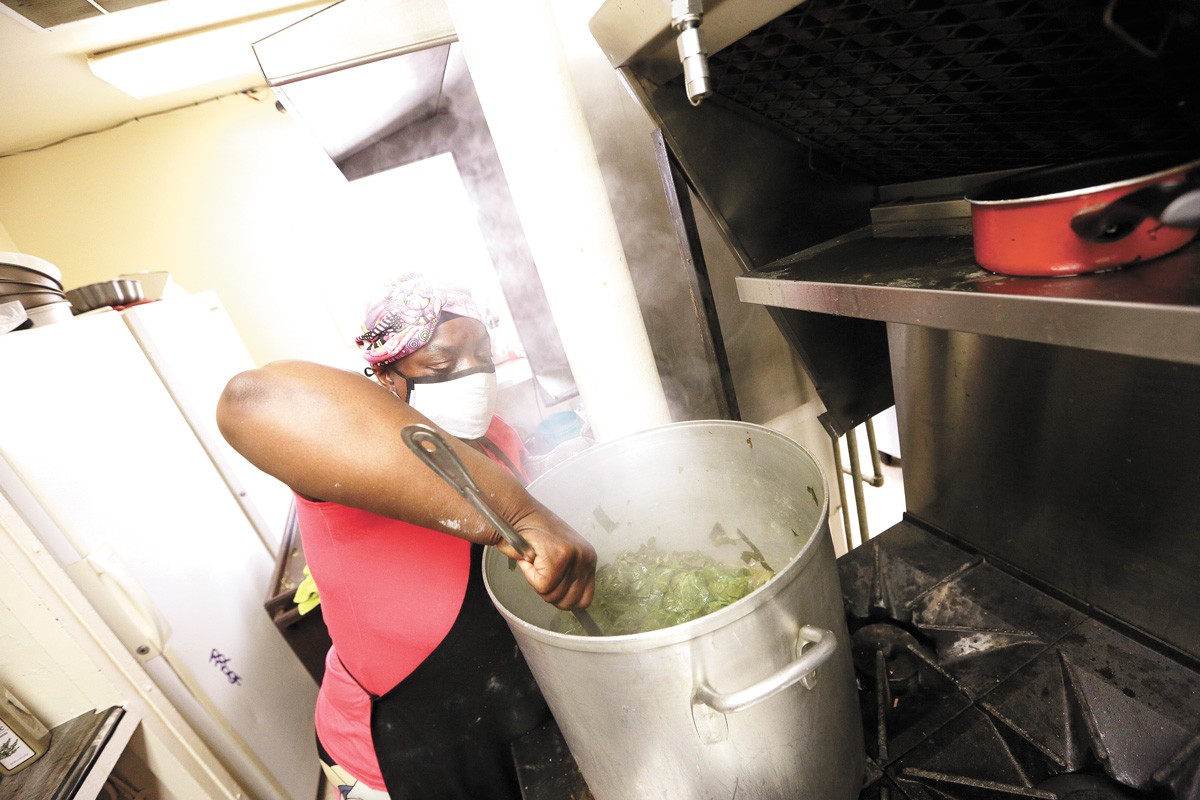 Young Kwak photo
Rose Martin, a cook and one of the restaurant managers, stirs greens at the Soul Lounge.

Most cities, especially those on the smaller side, have some gaps in their food community. And as much as Spokane and the Inland Northwest's scene has diversified over the years, there are still some types of cuisine underrepresented in our neck of the woods.

Thankfully, there's also some entrepreneurial spirits who see that not as a barrier, but as a challenge to introduce food lovers to their kind of cooking. Such is the case with Cassie Williams and D Johnson, partners in life and business who recently opened the Soul Lounge Bar & Grill on the corner of Sprague Avenue and Altamont Street.

"We have a few soul food locations, but it's not something that's offered a whole lot," Williams says from behind the diminutive bar currently also serving as the spot to pick up to-go orders.

"Both of us grew up eating that, and it's what we eat every holiday. When we go out of town ... it just seems like it's offered way more than here. We just wanted to provide something that we love, that we know a lot of people in our community love, and do it good."

So far, so good on that front. The Soul Lounge menu isn't huge, but Williams and Johnson plan on adding dishes as the months pass. And what is on the menu is consistently delicious.

Entrees include shrimp and grits ($17), chicken and waffles ($17), catfish ($17, or smothered with a shrimp sauce plus two sides for $25), and fried chicken dinner ($17, includes two sides). Anyone who's into Southern cooking knows the importance of those side dishes to the meal. The Soul Lounge has some seriously great ones, from collard greens (seasoned with smoked turkey instead of pork, a sneaky-delicious switch) to candied yams to mac and cheese. And I don't think I'd ever had fried cabbage before, and if I did, I don't remember it. I haven't stopped thinking about the Soul Lounge version for a good month.

The kitchen's flavors come from the experienced minds of three women who Williams says everyone knows by just their first names. Rose, who Williams has known since she was 12, seasons all the chicken. Blondie packed a slew of recipes from her Florida upbringing, and Rose brought her on board. And dessert master Kiki stopped by when she saw Williams and Johnson prepping the old Flame building for its new life as the Soul Lounge, and introduced them to a velvet cake and a strawberry cake that both appear on the menu now and then, along with peach cobbler.

Just a couple months in, the crew has already tried some new things and tossed out others. They had breakfast going daily for a while, but now it's just Saturdays and Sundays (although former breakfast specialties like the shrimp and grits are now on their all-day menu). They've done special barbecue days, and as Spokane moved to Phase 3 of its COVID recovery, they started hosting DJs in a part of the building where a stage and dance floor are the last remnants of what the place looked like as the Flame nightclub. 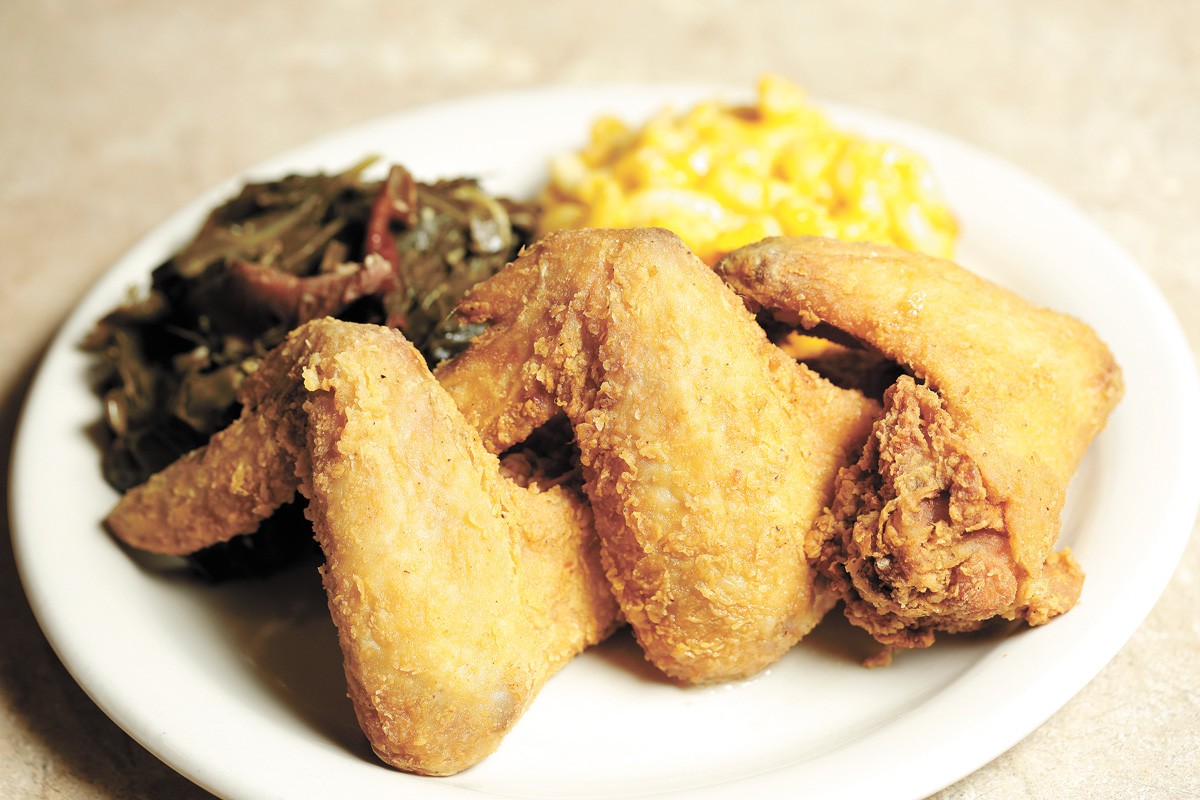 Overhauling the building was a big part of getting the Soul Lounge open, Williams says. She and Johnson signed the lease in August, in the midst of the pandemic. That turned out to be a blessing considering what they had to do to turn the Flame into a more family-friendly spot, albeit still one that can host 21+ dance parties and live music on occasion. They recently hosted a hip-hop show featuring Compton Av and Guerilla Black.

"This building needed a lot of work," Williams says. "It actually kind of worked out because we had time to get it together before opening up. We're coming in at a time when people are wanting to get back out. It's been a year now, and they're looking for good food and somewhere to come hang out and have fun. I think the timing actually worked out well."

The Soul Lounge space is huge, with different rooms dedicated to an entryway, family dining areas, that dance floor, some pool tables, and a bar. They're thinking about creating an outdoor dining space in back as well, but want to get some momentum going first, as well as the ability to be fully open when Spokane hits Phase 4. They tore out the old carpet, put in new floors and painted most of the building inside as well.

"It looks brighter and newer in here, more modern I guess. More welcoming," Williams says. "And there's still a lot to be done."

People have certainly responded, from the soul food lovers who came across the Soul Lounge's active social media pages on Facebook and Instagram (@TheSoulLounge509), to the folks who live in the neighborhood excited for a new dining option. Williams figures they've had some regulars since the first week they opened.

"The thing about the east side is that people are loyal to things in this area of town, for sure," Williams says. "The fact that this was such a known place [as the Flame] to a lot of the neighborhood here, they're going to come support just because they're happy it's open again. Before we were even open there were people stopping by constantly, wondering when we were going to open. The loyalty in this area is real, and it wasn't something we were looking for specifically, but once we were here, then we definitely noticed and appreciated it."

And the Soul Lounge is showing that appreciation by delivering some damn fine food, joining Soul Fresh and Chicken-N-Mo in bringing some much needed flavor to Spokane.

"I just love how people love the food, really enjoy it," Williams says. "In the past, this has been a bar, and you can come here to drink or go to bars right down the road. What sets us apart is the food. I like how happy it makes Blondie and Rose when they hear people love what they're making. This makes me real proud." ♦