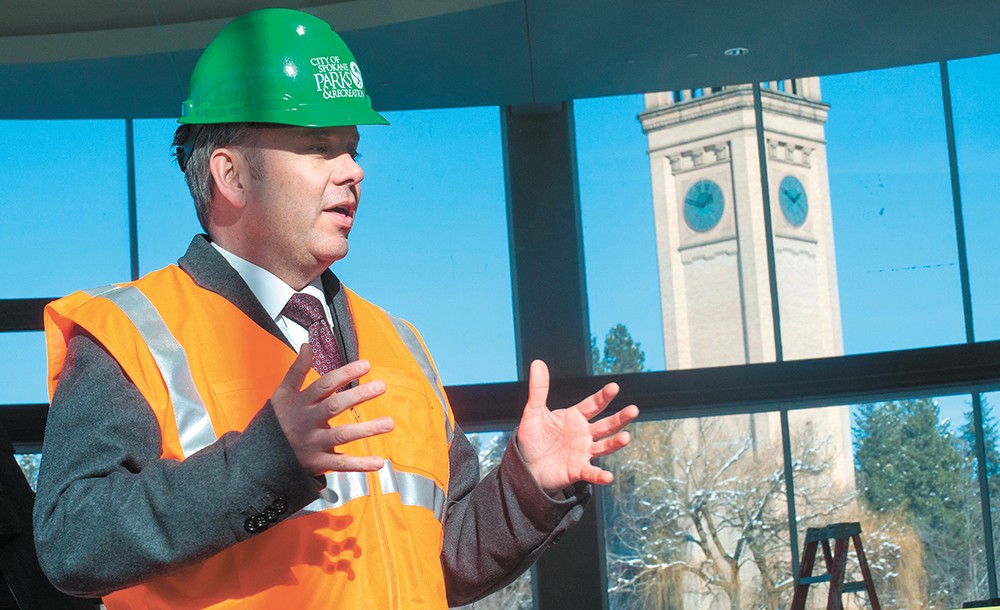 Concrete dust and chunks of rubble fall as an excavator's hydraulic hammer pounds away at one of the remaining pillars in the old U.S. Pavilion at Riverfront Park.

Over in the newly constructed Looff Carrousel building, Spokane Mayor David Condon, decked in a green hard hat, casually scans over the blueprints before joining BNSF spokeswoman Courtney Wallace to hold a giant check touting a $150,000 grant from the BNSF Railway Foundation to improve Riverfront Park.

"This is separate from any of the public money," Wallace says. "It's above and beyond."

It's a visible symbol of the fact that the revitalized Riverfront Park is not just going to be the new Looff Carrousel rotunda, the ice ribbon and an upgraded pavilion. The $64.3 million bond, after all, is just the start of a nearly $100 million wishlist — not the end of it.

And with the infusion of private donations, the hope is, the park may get a lot more than what voters paid for.

"You think of things like a staircase up to the clocktower," Spokane Parks and Recreation Director Leroy Eadie says. "A tour train upgrade that's not a part of the basic bond."

The park board has been discussing a slew of possibilities outside the scope of its original project: An additional playground aimed at younger kids; better amusement park rides; an extended boardwalk on the south bank of the Spokane River; a dog park; interpretive signs explaining the history of the park and its landmarks; two of Expo '74's iconic butterfly sculptures, resurrected and updated.

None of these possibilities are certain or remotely in stone. But with the launch of a $3 million capital campaign to attract private donations, a few of them may become reality.

This isn't the first time at outside group has tried to raise private money for new projects in the park.

Back in January 2013, before the park bond passed, a group called Friends of Riverfront Park went before the park board to discuss the possibility of raising outside funds to improve the park. Don Allen, the group's leader, had a lot of ideas — like allowing visitors to climb to the top of the clocktower or a big water feature, possibly sponsored by the Kalispel Tribe.

But then Allen went out and started hitting up potential donors about possible projects they'd be interesting in sponsoring. Within a month, however, the parks department — concerned that the efforts were more confusing than helpful — asked that the Friends of Riverfront Park cease and desist.

"They asked us to quit going out and getting money," Allen told the Inlander in a 2016 interview. "They turned 180 degrees, from they loved us to 'cease and desist.'"

This time, the efforts to raise funds are more officially sanctioned.

The parks department, Eadie says, has already hired Brett Sports & Entertainment to look at selling sponsorship and naming rights to features of the park like the ice-skating ribbon.

"What those dollars do is give us more flexibility for programming," Eadie says. "We want to bring in as many free events as possible."

Separately, they've tasked the Spokane Parks Foundation with the goal of raising at least $3 million in private donations.

Carol Neupert, a Spokane Parks Foundation board member since 2014, has already been chosen to head up the capital campaign. But first, they need to decide what they'll spend the money on. She says the foundation is winnowing a list of 20 projects down, but the park board will need to approve the final list.

She doesn't want to talk about specifics.

"I don't want to do that because it puts us in a position to have to say, 'Here's why we didn't include that,'" Neupert says. "I just want to wait until we know exactly what we're going to be raising money for."

Ultimately, the park board will have the final say on whether projects like renovating the clocktower to allow visitor access get funded.

"I would love to do anything we can within reason to activate the clocktower," says park board member Steve Salvatori.

But City Councilwoman Lori Kinnear, on the Riverfront Park Executive Committee, is skeptical about the logistics of such a project.

"I don't know how you would keep that area safe," Kinnear says. "You'd have to have employees there as well. To make sure nobody fell or nobody was attacked."

But a small dog park area for downtown dog owners, on the other hand? She likes that idea.

One possible project in particular has stoked public enthusiasm.

Expo '74 featured five butterflies, each covered in brightly colored fabric to mark each region of the exhibition. Only two survived. But the park bond didn't include restoring the two butterflies in its list of priorities.

That's why Jennifer Leinberger started the Save the Expo Butterflies group on Facebook.

Eadie is hopeful that the parks department can afford to refurbish at least one butterfly — the one at the northern entrance of the park. The department has even been talking with Spokane Arts about the possibility of partnering with local artists to paint the fabric on the wings with a different design every year.

"We've told the Save the Butterflies group, 'We'll focus on the north bank one,'" Eadie says. "Why don't you focus on the second butterfly?"

It's uncertain how much it will cost to resurrect the second butterfly, currently sitting in storage. Leinberger hopes the parks foundation will help use some of its capital campaign funds to help save the butterflies.

Last month, the Save the Expo Butterflies group started a fundraising campaign of their own at youcaring.com, directing donations earmarked for the butterflies to the parks foundation. Leinberger's confident that, like the clocktower and the pavilion, the butterflies will become an iconic part of Riverfront Park.

"When they start flying in the wind safely," Leinberger says, "they'll be as popular as the garbage goat, I swear." ♦