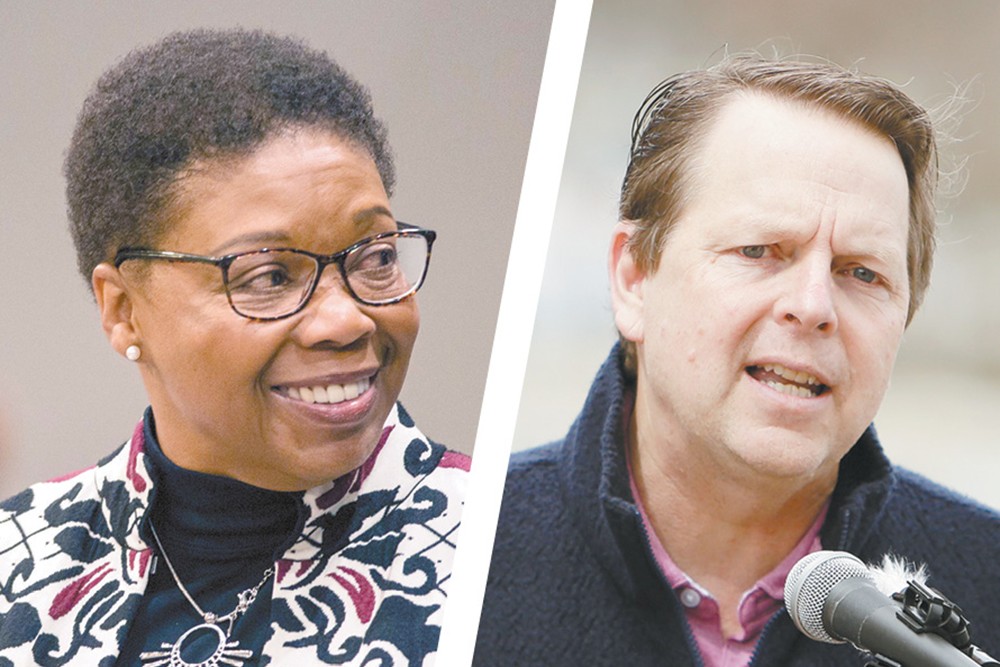 In the past four and a half years, Spokane City Councilman Breean Beggs has attended countless marathon meetings, the sort that are packed with Spokanites yelling about some of this country's most incendiary topics: climate change, homelessness, immigration, abortion.

In more normal, more apathetic times, the approval of a union contract might not spur that sort of passion. But with the Spokane Police Guild contract at stake, and with police brutality protests still dominating the nation, these aren't normal times.

In the end, the council on Monday night rejected the police contract unanimously in a 7-0 vote.

For one reason the contract was rejected, you could point to the national outcry for police accountability. But you could also look to Beggs — a longtime police reformer at a time when the country is crying out for police reform. He's the man who once sued the city on behalf of the family of Otto Zehm, a mentally disabled janitor who died after being beaten, tased and hogtied by Spokane police.

But you could also look to the newest councilmember, Betsy Wilkerson, a longtime black community activist at a time when the country finally says it's ready to listen to the black community.

"It feels like the stars have aligned," Wilkerson says, "for real change."

In one sense, passing a police contract was long overdue. The Spokane Police Department's rank and file have gone more than three years without a contract.

In a statement on Monday, Spokane Mayor Nadine Woodward argued that the proposed Police Guild contract provided more accountability and set the stage for greater reforms to come.

"Tonight is an opportunity for Spokane to enhance a civilian police oversight model that is already ahead of what most communities are doing nationally," Woodward wrote in support of the contract.

But during her campaign last year, Woodward bragged about her endorsement of the Police Guild. She said the power of the police ombudsman — the civilian charged with scrutinizing the actions of SPD — should remain "limited" and proposed subjecting him to a term limit.

He was the attorney whose push for reform helped lead to the creation of the ombudsman in the first place. And Beggs savaged the proposed contract as a huge step backward.

All its minor improvements to oversight were washed out by a huge downside, he says: The proposed contract would have allowed the Guild to attempt to get the ombudsman or an ombudsman commission member fired for "exceeding their authority." To Beggs, that threat represented a chilling effect so powerful that it would freeze police oversight entirely.

"You might as well not have an ombudsman if you have that provision in there," Beggs says.

After more than two hours of public testimony opposing the contract on Monday night, Beggs started to explain his vote with a history lesson. He goes back to 2004, when he first started at the nonprofit Center for Justice. He describes sitting with a dozen different families who lost loved ones.

"I was struck with their pain, and not understanding of how the people who were paid to protect them could have turned on them," Beggs says. "It wasn't 'bad officers.' It wasn't 'bad apples.' There were really bad policies. Really bad procedures. Officers were behaving as they were trained to do."

And from there, Beggs describes the repeated attempts to ensure independent oversight of the Spokane Police Department, only to be thwarted by mayoral compromises, labor law, and union contract negotiations. Even when the public overwhelmingly voted to embed the ombudsman's independence into the city's charter, that promise still remains unfulfilled, he says. The ombudsman is still handcuffed in how he can investigate and what he can say about those investigations.

"And that's a problem. Without that, we can't get where we need to go," Beggs says. "It doesn't meet the charter. I don't know how we can legally vote for it."

In this moment, a month after Spokane Police launched tear gas at both looters and peaceful protesters demonstrating against police brutality, the contract was met with unprecedented community opposition.

"NO POLICE CONTRACT Without Complete Independent Oversight" reads a full-page black and white advertisement in Sunday's Spokesman-Review, arguing that allowing the Guild to influence who oversees the department "sets a very dangerous precedent!"

The ad is signed by 21 African-American leaders, including Black Lens publisher Sandy Williams, the heads of the NAACP and Spokane Community Against Racism, and a number of black pastors.

Wilkerson says she abstained on the board's vote to run the ad, but she also says she agrees with the ad's message.

Like a lot of black mothers, Wilkerson says she's had "the talk" with her son, the one about how to survive encounters with law enforcement. For her, it came when her son was 16, got home late, and told her about an awful encounter with the cops.

"I said, 'BJ, All you got to do is to live to fight another day,'" Wilkerson recalls telling her son. "You've got to get home safe, and we'll take it on, but you can't do it if you're not alive.' And that's what most mothers and fathers say to the kids of color."

Wilkerson brings that experience to the council dais. But she also stresses how much she doesn't want to be tokenized or reduced to a councilwoman who only represents the black community. She describes the precarious balancing act of both representing her own experience and representing everyone in her district.

"I feel like I'm on a trapeze wire," Wilkerson says. "My fall could be real heavy and hard."

She says she went on her first police ride-along this past weekend and got the opportunity to look through the eyes of an officer. When she announces her vote at the council meeting Monday, she takes pains to stress that not all cops are bad.

"My problem isn't the police. I have met some amazing men who are committed to caring for us in the community," Wilkerson says. "I too support the police. ... Don't get this twisted."

But she also says that she doesn't want black children to grow up fearing those who are supposed to protect them.

"We are in a nation where many black voices are being heard, and many for the first time," Wilkerson says. "As an African American councilwoman, as a black woman, I want to say, 'I hear you, I see you, and I feel your pain.'"

And then she quotes Carl Maxey — the black civil rights lawyer for whom the Carl Maxey Center is named: "'You cannot allow the police to investigate themselves.'"

A unanimous council vote against a police contract and in favor of more police oversight might sound unprecedented. It's not. The exact same thing happened in 2013, and according to Beggs, it still didn't result in the oversight the city demanded.

Beggs hopes this time will be different. The police contract dispute could be decided by a state arbitrator. The Washington Legislature could modify labor laws to mandate police oversight statewide. Or, he says, the city and the Police Guild could finally hammer out an agreement that provides oversight.

In the meantime, the council is debating a number of other police reforms, including effectively banning controversial uses of force. Ideally, Beggs says, that would mean fewer chokeholds, fewer police dog bites, fewer rubber bullets — and fewer deaths.

That's something that Wilkerson has been hoping for a long time. She doesn't want Spokane to become the next Minneapolis or Ferguson.

"I don't want Spokane to be the next hashtag on the news," Wilkerson says. ♦