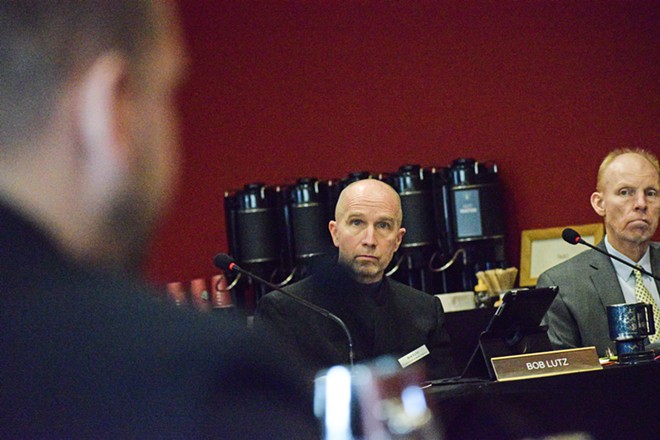 Wilson Criscione photo
The status of health officer Dr. Bob Lutz, center, is the subject of a special meeting Thursday.

As the community waits to learn why Spokane Regional Health District administrator Amelia Clark believes health officer Dr. Bob Lutz should be fired — which she's expected to explain during a health board meeting later this afternoon — current and former staffers have filled in some of the gaps illuminating tensions between the two.

In short, it appears the two did not agree on multiple occasions about how much Lutz, as the public face of the agency, should speak his opinion in public without clearing that first with Clark, the head of the agency. His support for Black Lives Matter and reducing racial inequities, along with support for gun control as it relates to suicide prevention, appear to be among the topics that Lutz, Clark and some of the district's Board of Health members disagreed on.

Whether and how much those disagreements played a role in Clark's move to push Lutz out remains to be seen.

RULING FROM THE TOP

Former Health District division director Sheila Masteller tells the Inlander that she'd already planned to retire this year, but after seeing the leadership style of new administrator Clark, who was hired by the health board last August, Masteller says she moved up her retirement to mid-February.

After Masteller put in her two weeks' notice, Clark announced a major reorganization of departments, including the combination of Masteller's division, Community and Family Services, with Health Promotion.

While managers knew a reorganization was likely, no one seemed to expect it so suddenly or that it would include laying off Health Promotion director Kyle Unland.

Masteller recalls that it didn't seem like Clark took input from managers on the executive leadership team seriously or that she was willing to adjust her decisions based on what they said.

"I think Amelia is an authoritarian, a top-down administrator who is a person who gives direction to everyone else without asking for input," Masteller says.

While she says "clashes" might be too strong of a word, Masteller thinks that some of the angst between Clark and Lutz came from the fact that Lutz, as health officer, has state-mandated responsibilities that include advocating for public health in the community.

"She, in her controlling nature, never wants anybody to speak without going through her, ever, on anything," Masteller says. "So I know that some of this conflict during the COVID period had to do with his quick access to the public and giving guidance and statements to the community."

Masteller notes that she was alarmed when the board hired Clark, who didn't have a background in public health, which has a different way of approaching health topics than the health care system for which Clark had been a consultant.

Rather than merely treat the symptoms of health crises, public health offices attempt to look at the combination of issues that lead to poor public health outcomes – socioeconomic status, childhood trauma, education level, environmental pollution, etc. – and work to improve conditions for everyone and prevent public health crises before they start.

Some of the differences of opinion Masteller witnessed between Clark and Lutz had to do with their different stance on what constitutes public health. Should public health just address the state-mandated list of responsibilities, or should that list expand to meet specific community needs?

"It’s not just the delivery of programs to make sure our restaurants are safe, but the whole concept of how you get your community healthy," Masteller says. "The public health approach to mental illness, addiction, to suicide prevention and gun violence ties all those things together."

She says Lutz understands how those things intersect and has expressed his opinions on the data to the community. That's where Masteller says his views have sometimes become controversial in discussions with the Board of Health and Clark.


For instance, when Black Lives Matter protests occurred late this spring following the death of George Floyd in Minnesota, Lutz marched with attendees and supported the movement's calling out of racial inequities, particularly in the criminal justice and health care systems.

He told the Spokesman-Review at the time, "We have a society that has institutionalized racism and to speak to that is part of what we do in public health."

The health board later passed an equity resolution, acknowledging structural racism and committing to combat and remedy the disparities that have grown for minorities. But it sounds like there were questions about Lutz supporting Black Lives Matter, Masteller says.

Lutz is also passionate about suicide prevention, and he has talked about gun violence statistics publicly, noting that 60 percent of gun deaths are suicides.

"His commitment to addressing suicide prevention, to figuring out how can we lower deaths from guns, are pretty strong public health messages," Masteller says. "I know there were some conflicts, based on what Bob has told me ... The board of health has in the past expressed concerns that 'We can't be against the Second Amendment,' but a lot of that is behind the scenes, and I just have one view from Bob."

Health District project manager Heidi Wilson is tasked with figuring out how to move temporary projects in the district into permanently funded programs when they line up with overall goals to improve public health.

Wilson says after Clark was brought on, she questioned why some projects were being led by task forces, which are meant to be temporary. Among those projects she asked about was the suicide prevention effort.

"Part of my job is to get stuff up and going and get funding so it can move into a team and be more of a program so it has more structure and support," Wilson says. "Every time I tried to move one of these projects into getting funded and getting that kind of support, I would hit a block. The suicide project was one of those."

Wilson got the impression there were questions about why public health should lead the cause for suicide prevention, rather than another organization in the community. Masteller recalls similar questions about whether public health was the best place to be leading that. Both note that much of what the agency does is bring together the groups that can address a problem.

"One of the foundational components of our work is convening voices together to protect the public’s health," Wilson says.

Masteller and other staff note that Lutz has done an amazing job of building relationships with other organizations in the community, including within the health care system, with schools, with emergency responders and with other groups that work closely with people in the community.

"The loss of Bob and his skills and his known relationships and ability is gonna be a huge loss" for the district, Masteller says, particularly during a pandemic. "I'm very worried. Who are they going to have do that?"

WHAT ELSE WE KNOW AHEAD OF THURSDAY BOARD MEETING

There are still questions about what the health board was told during last week's executive session when Lutz's employee performance was discussed, and what happened afterward.

The Health District initially announced last Friday that the health board had asked for Lutz's resignation, but later Clark said that as administrator, she had asked for the resignation with the board's support.

KXLY reports that Spokane City Council President Breean Beggs, a health board member, was immediately concerned Friday morning about how the Health District portrayed the situation. In an email, Beggs noted "the board left the meeting with the understanding that there would be progressive discipline via written communication based on the advice of legal counsel."

It apparently was not expected that he would be asked to resign.

Further, Lutz issued a statement this week saying that Clark had actually told him he was fired, and gave him a day to sign a confidentiality agreement and waive his rights to sue in order to receive a severance package. Lutz refused.

Clark does not have the power to fire the health officer under the district's rules. Instead, that must go to a vote of the board, which could happen later today.

A rally in support of Lutz is planned for 1 pm in front of the Health District building, led by the unions that represent most of the staff members who work for the district.

Many community groups have filed letters of support for Dr. Lutz ahead of the special meeting.

Also this week, multiple programs have been cut within the agency, with multiple employees laid off.

Masteller, who says she had spoken with managers who used to work under her, confirms multiple programs in her old division had been cut, unrelated to the issues with Clark and Lutz.

The cuts appear to be the follow-through to those discussions about what the agency must do according to the state and what it should do. Some neighborhood programs cut were not mandated by the state, including things like a program to encourage people to bike, walk or ride the bus and getting safe routes for children to walk to school.

A union representative declined to comment on the matter.