Based on discography alone, Cami Bradley and Whitney Dean were almost destined to be Holiday Pops guest artists from the moment they began working together as the Sweeplings.

There was the folk-pop duo's early single "Snow May Be Falling," with its imagery of carolers, sleigh bells and brisk winter weather, released almost immediately after their eponymous EP debuted in late 2014 — not long, incidentally, after Bradley's star turn on America's Got Talent. Then came the four-song Winter's Call in 2016, which featured their renditions of "I'll Be Home for Christmas" and "Carol of the Bells." A year later, a mix of seasonally inspired originals and standards like "It Came Upon a Midnight Clear" and "Deck the Halls" followed as the Merrier Days EP.

Even bands with decades under their belt can rarely point to such a rich Christmas repertoire. But more than that, the Sweeplings have never been content with straightforward covers of well-known standards.

"A lot of Christmas songs actually have a lot of depth in them," Bradley says. "We hear the jingling bells, so we tend to hear them as happy or jolly. What we do is we really try to dig deep into the songs and figure out what the writer meant and how you could use that."

"Our approach is to take a song for its general intent and find out what else it could be used for," adds Dean. "So, for example, 'I'll Be Home for Christmas' ... ours is like, what if it was like, 'I'll be home for Christmas, but this is going to be the last one?' So we put a spin on everything where you can be more appreciative."

The Sweeplings' slow, sparse, haunting take on that particular Christmas classic might sound worlds apart from the Bing Crosby and Frank Sinatra versions that dominate holiday playlists, but neither Bradley nor Dean is out to reinterpret beloved tunes simply for the sake of it.

"Christmas music is sacred to a lot of people," not least because they find comfort in the familiarity, she says. "And I totally get that, because I am-slash-was one of those people. So we try really hard to take the melody, the structure, the lyrical content of each song, and ... keep a lot of the portions that are sacred, so that when people listen to it, they can connect and they don't feel like they've lost a piece of their tradition."

Over the past few months, the Sweeplings have been reapproaching their own Christmas compositions and arrangements in anticipation of their appearance with the Spokane Symphony for the Holiday Pops concerts on Dec. 18-19. From their respective homes here in Spokane and near Huntsville, Alabama, Bradley and Dean have been collaborating with David Armstrong, the symphony's assistant principal second violin, to augment their songs with the full instrumental range now at their disposal.

As part of the back-and-forth creative process, they've been sending Armstrong tracks with digital orchestration inserted via software. He then fleshes out the charts based on his own experience developing arrangements with groups like the Cherry Poppin' Daddies. The result goes back to the Sweeplings for review and refinement.

"It really is a collaboration of both parties trying to create something special and unique and different. He has a really good idea of what instrumentation they use and which sections could be fuller than what we gave him," Bradley says. "And we've given him some freedom, too, to create and arrange in a way that will feature the songs we've given them but will also do what the symphony does best.

"We're just bringing our pieces with open hands and are super excited because we feel like it's a special opportunity that not very many people get. To be able to play these songs live with a symphony as your backing track is pretty extraordinary."

The final setlist will include around a dozen songs, including "O Holy Night," "I'll Be Home for Christmas," "White Christmas," "Let It Snow" and "Winter Wonderland." Roughly half will be performed alongside the Spokane Symphony under Morihiko Nakahara's baton, with the rest performed by The Sweeplings alone.

"We'll be doing a bunch of classics redone and rearranged, a couple of standbys and then a few of our versions of what Christmas feels like in song form," Dean says. "It won't be exactly how you've ever heard 'O Holy Night,' but it'll be our version of it." 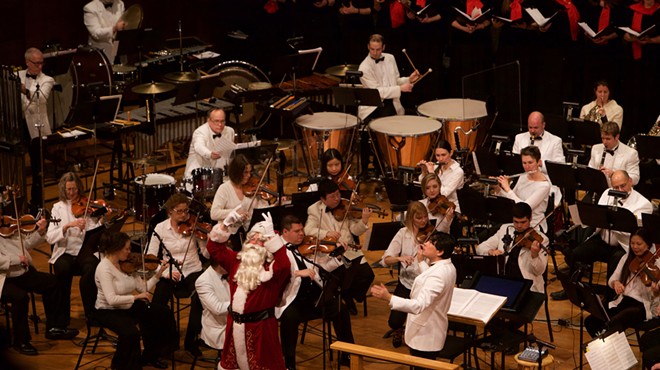 As befits the season, there's an element of surprise in all this. Although Bradley recently visited Dean in Alabama for one last session of one-on-one in-person collaboration, the all-hands rehearsals in the 48 hours just before the concert will be the first time that either of them will have heard the final versions of their orchestrally backed songs.

"For us as well as the audience, it's going to be an experience," Dean says. "It's not just going to be where you walk in and hear the Christmas songs as you've always heard them. With this scenario, it's going to be a little bit broader. You're going to get a Broadway show meets a folk-pop concert."

"We've done Christmas shows off and on for the last eight to 10 years that we've been doing music, and there always is just an extra sprinkle of something special during the holiday season." ♦

Fiddler on the Roof @ First Interstate Center for the Arts