The Theme is Fun 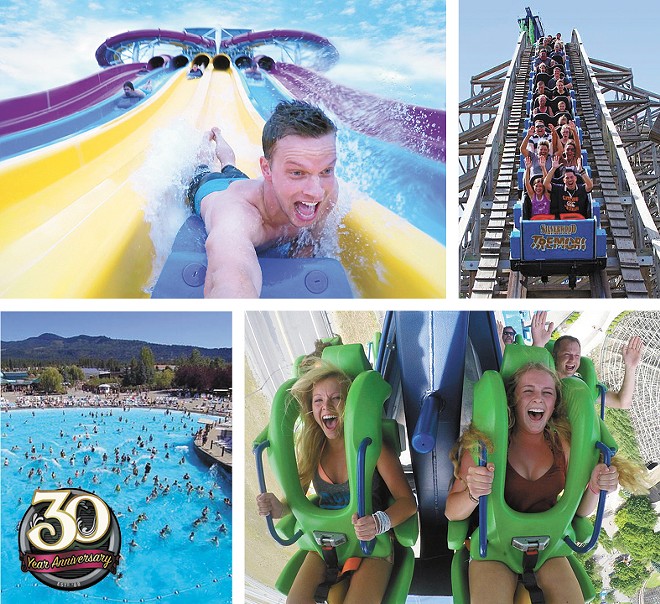 Opening day at Silverwood Theme Park is set for May 5th

For many Inlanders, Silverwood Theme Park is like an old friend they’ve watched grow up. It’s come a long way since founder Gary Norton’s vision of a humble home for the old train he successfully purchased by outbidding none other than Walt Disney himself. Over the past 30 years, Silverwood has evolved into one of the largest theme parks in north America, occupying several hundred acres with more amenities than you can imagine.

Silverwood is actually two parks in one: Boulder Beach Water Park (opens June 9) and the rest of the park, with more than 70 rides and numerous attractions, like the 30-minute magic show by Nick Norton and Garfield’s Summer Camp, featuring regular appearances by the lovable characters of the popular cartoon series about the lasagna-eating cat. In between rides, enjoy arcade and midway-style games, places to shop for a special souvenir of your awesome day at the park, and more than two dozen eateries, from sit-down places like Lindy’s for burgers, to grab-and-go spots for kettle corn, ice cream and classic caramel apples.

Thrill attractions like the 140-foot Panic Plunge drop you while the Aftershock hurtles you through mind-bending loops at speeds comparable to the cars you’ll see on adjacent Highway 95! Gentler rides can be had via the spinning Scrambler, the family-friendly Krazy Koaster or the classic Ferris Wheel offering panoramic views of the park. Rides for little tykes abound, including the Flying Elephant ride and Polliwog Park, where getting wet is half the fun. One ride all ages can agree on is the original steam engine train, which tours you through the park in a relaxing 30-minute ride (unless you’re stopped by “bandits,” which is known to happen from time to time).

There’s a lot to do at Silverwood, which is why the park expansion plans have included the creation of an adjacent RV park for overnight stay. The park also welcomes large groups to take advantage of its picnic area and offers catered meals for large groups such as a school outing or family reunion. Season passes make visiting the park a snap, with free parking, discounts at Lindy’s Restaurant and the RV park, as well as unlimited admission for you and up to two guests.

Come visit Silverwood on opening day, May 5, when the park kicks off the season with an anniversary-themed price of only $19.88 per person (the park was formed in 1988). It’s just their way of saying thank you to all the friends they grew up with.

1970’s soft rock takes over the Coeur d’Alene Casino when Ambrosia takes the stage to play some of its top 40 singles, along with songs from its new album to be released this year. Peter Beckett, best known as the lead singer for Player also joins the band. Tickets $15-$25; Coeur d’Alene Casino; 7 pm.

Discover a New World
MAY 4-5

Resolve to Rev Up Your Activity Level

Ring in the New Year Here

Eat, Drink and Be Merry

Making the Most Merry

Ring in the New Year Here

Get on the Water