The thriller Bad Samaritan is so dumb it's almost entertaining 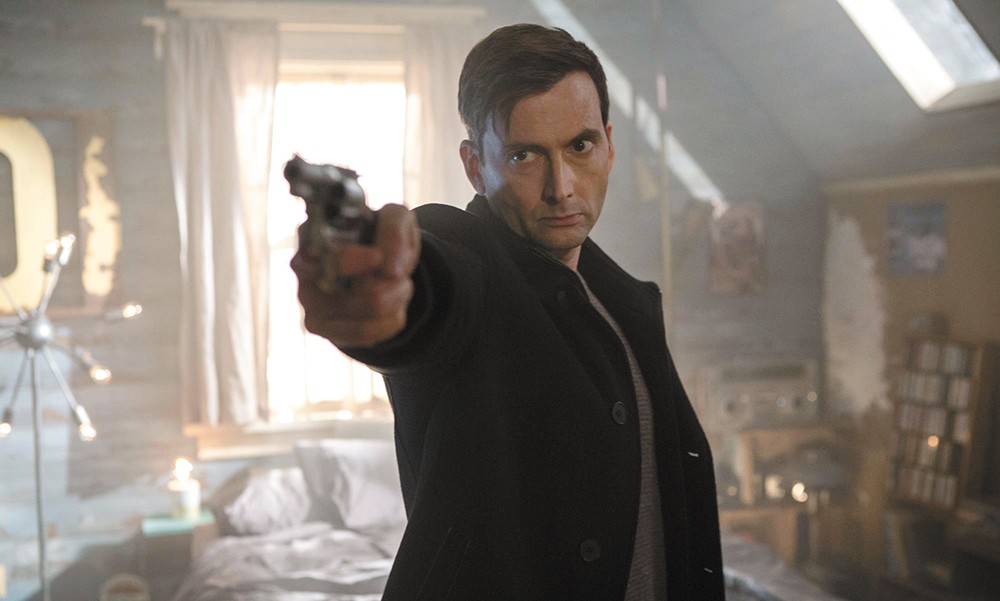 Not even a TARDIS could save David Tennant from the aggressive stupidity of Bad Samaritan.

If you were casting the role of a murderous psychopath who's got hidden torture rooms in his ultra-modern house and an isolated cabin surrounded by filled-in graves, I don't know if David Tennant would be high up on your list of candidates. I can buy him as a centuries-old, shape-shifting time lord, but a devious, merciless and physically powerful serial killer? I don't think so.

Yet here he is playing a kidnapper and murderer in Bad Samaritan, which is cruddy and stupid from its title on down, and way beneath his talents. It's not for Tennant's lack of trying, though: He contorts his face, bugs out his eyes, and swings unpredictably from come-hither whispers to staccato shouting. It's a big, sometimes campy, performance, but in a movie that doesn't warrant the effort.

He's not the movie's protagonist, however. That would be Sean Falco (Robert Sheehan), a 20-something Irish immigrant living in Portland and who's often in trouble with the law. He's an amateur photographer — the movie establishes early on that he's adept at Photoshop, which (honest to god) becomes a crucial plot point later on — but he refuses to take the corporate photography job that his stepfather could land him. He's got artistic standards, man.

He works instead as a valet outside a fancy Italian restaurant, which is a front for a tiny criminal ring: When someone drops off their car, he and a friend use the GPS systems to lead them back to the driver's house, which they then rob. One night, Sean picks the wrong house.

It, of course, belongs to Tennant, a Maserati-driving jerk with the extravagant name of Cale Erendreich. Sean breaks in, only to discover Erendreich's got a woman (Kerry Condon) chained up in his office and a room full of bloody power tools in the garage. He goes to the police, but Erendreich is always one step ahead, and he then spends every waking moment ruining Sean's life.

He's a real devious mind, that Erendreich. He has supposedly eluded capture for years (his methods remain unknown, but we get the sense that he's moved around a lot and killed a lot of women), and yet he's remarkably cavalier. At one point, he plans to inject Sean with a syringe full of neon green liquid, which he wields right outside a heavily-monitored federal building. (He doesn't end up using it, and we never see or hear about the syringe again). He uses burner phones and then tosses them right out the car window. (Nobody in eco-friendly Portland has noticed this?) He even tries to run a dude over in downtown and in broad daylight.

He also suffers from an Equus-level obsession with horses, no doubt stemming from a childhood trauma involving a gun and a stallion (which we see in a hilariously incompetent opening sequence). He's got porcelain horse heads all over his walls; even his desktop background is a horse. Think this will somehow pay off in the end?

Bad Samaritan is very, very silly and yet it takes itself very, very seriously, with the plot of a rejected Stieg Larsson manuscript and the production values of a hacky Law and Order spinoff. It was directed by Dean Devlin, who spent years as a producer for schlockmeister Roland Emmerich (Stargate, Independence Day) before making his directorial debut with last year's colossally stupid Geostorm. It seems he has a future making D-grade thrillers that you might one day half-watch on HBO when you're too hungover to change the channel.♦

The original print version of this article was headlined "Killing Time"

Bad Samaritan is not showing in any theaters in the area.