The Tide Is Turning

Last week's court ruling made Idaho one of the latest victories for marriage equality advocates, but more work remains 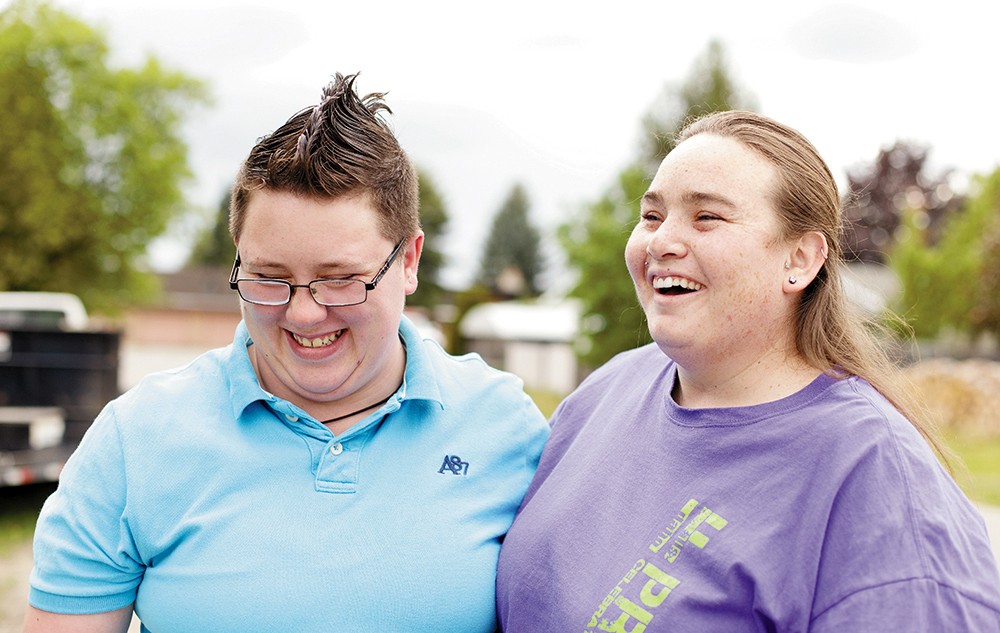 Young Kwak
Amanda Gunn and Amanda Hackworth plan to marry in Idaho in August if a judge's recent ruling is upheld. If not, they'll travel to Spokane to say "I do."

It should happen in her dad's backyard. That's where Amanda Gunn spent her teenage years and watched her siblings grow up. It's where her aunt and uncle got married. And today it's where her father, who has trouble traveling as his health rapidly deteriorates, already is.

"It would mean more than I can probably put into words to get married in his backyard," says Gunn, who lives in Coeur d'Alene with her fiancée Amanda Hackworth. The couple plans to marry this August. "It's really going to make me angry now if I can't do that, because this little ray of hope happened."

That hope came last week when a federal judge struck down Idaho's ban on same-sex marriage as unconstitutional, writing in her decision that it relegated gay and lesbian Idahoans to "a stigmatized, second-class status without sufficient reason for doing so."

Marriages were to start Friday at 9 am, but celebrations were halted Thursday when the 9th Circuit Court of Appeals issued a temporary stay on same-sex marriages until it could rule on the state's request for a longer stay while it appeals the case.

Until this week, Gunn and Hackworth had planned to get married in Spokane, where same-sex marriage has been legal since 2012, then drive back to Idaho for their reception. The ruling meant they could avoid that and say their vows in their home state. For now, they're back in limbo.

"We're just gonna plan [to have it in Spokane] and it'll all be planned and if, for whatever reason, before August 7 Idaho accepts us, then we will just move it to Coeur d'Alene," Hackworth says.

The disappointment at last week's halt on same-sex marriages was palpable, as North Idaho ministers who had planned to be at the Kootenai County Courthouse to marry couples Friday changed their plans. Still, there's a feeling among advocates that it's just a matter of time until equality comes to even the reddest and most far-flung parts of the nation, including Idaho.

"The tide is definitely turning," says Monica Hopkins, the former president of the ACLU of Idaho.

In total, 19 states now allow same-sex couples to marry, with Pennsylvania the latest addition after a judge struck down the state's ban Tuesday. Across the country, judges have issued about a dozen rulings in favor of same-sex marriage, many against bans like Idaho's, and nearly every state has a challenge to a marriage ban currently in court. While some states continue to appeal pro-gay-marriage rulings, what's emerging is a portrait of marriage equality that plays no political favorites: Along with their peers in states like Washington and New York, same-sex couples in places like Arkansas and Utah have been able to marry — if temporarily, pending appeals.

Gunn and Hackworth say marriage is one of the last major hurdles to normality for couples like them in Idaho, and they're willing to wait for change.

"Eventually it will not be an uphill battle," Gunn says. "Eventually, somebody will say, 'Hey, guess what? They're people and they have rights and that's OK.' ... Eventually, I'll be able to live in a state that I love and is absolutely beautiful, and be able to be exactly who I am when I'm with her."

Marriage isn't the only front where LGBT advocates see major work ahead, in Idaho and elsewhere. The long-running debate in Idaho over extending the state's Human Rights Act to protect gay and transgender people from discrimination in housing, employment and public accommodations continues. There is no such protection in federal law and advocates have had little luck adding it at the state level. This year marked the eighth legislative session in which the push to expand the law has not received a hearing. In the meantime, groups have pushed for the changes at a local level. After hours of public testimony and debate last summer, Coeur d'Alene passed an anti-discrimination ordinance to protect against discrimination in housing, employment and public accommodations. Six other cities in the state, including Sandpoint, Boise and Pocatello, have similar ordinances.

In Boise, a U.S. Navy veteran recently received national attention after she requested that she and her wife, who died in 2012, be buried together in the Idaho State Veterans Cemetery. The state Division of Veterans Services denied her request because a valid marriage license is required to be buried together in the veterans' cemetery, and Idaho does not recognize the license the couple received in California in 2008.

"It's not taking up any more space to have both of us in there, and I don't see where the ashes of a couple old lesbians is going to hurt anyone," the veteran, Madelynn Taylor, told Boise's KBOI.

"Idaho is complicated," says Tony Stewart, who has a long history of working on human rights issues in the state and is now a member of the Kootenai County Task Force on Human Relations. Stewart says discrimination based on sexual orientation or gender identity is less dramatic to many lawmakers than the violence of the Aryan Nations in the 1980s, when murders and bank robberies had "angered people all over the region." Then, the legislature took action by adding hate crime laws to Idaho code, but those laws still do not protect people who are gay or transgender.

"When it comes to this issue, the picture is different," he says. "In this case we're not dealing with that kind of criminal activity, so it makes it a great challenge to get some people to say we shouldn't have this form of discrimination. It's almost like apples and oranges [comparing] what was happening on the ground, but that doesn't take away from the fact that no one should be discriminated against."

Today, both of Idaho's serious gubernatorial candidates oppose allowing same-sex marriage and incumbent C.L. "Butch" Otter has dedicated $1 million to appealing last week's ruling. Otter has continued to insist that he is defending the will of the 63 percent of Idaho voters who supported adding the ban to the state constitution in 2006. All four of the state's federal representatives received 0 percent scores from the Human Rights Campaign, which analyzed each representative and senator's positions on bills concerning issues like discrimination and health care rights for same-sex partners.

But advocates say the resistance to change may not be truly representative of Idaho's voters. A 2008 survey by Boise State University found that 63 percent of respondents believed it should be illegal to fire an employee because they were "perceived to be gay or lesbian." In a 2011 survey of 400 Idaho voters commissioned by the ACLU of Idaho and conducted by a research firm, about 80 percent of those asked said it should be illegal to fire someone or deny him or her housing, health care or insurance because the person is gay, lesbian, bisexual or transgender. Sixty-four percent of those asked said they would support adding sexual orientation and gender identity to the state's Human Rights Act.

"I really think if we had a vote today in Idaho on what we did in Coeur d'Alene, the majority of citizens would end discrimination," Stewart says.

The ACLU of Idaho, which works on local nondiscrimination ordinances and advocates for marriage equality, is now also focusing on school policies specifically protecting students from harassment based on their sexual orientation or gender identity, says Leo Morales, the organization's new interim executive director. Morales acknowledged that the political climate in Idaho makes his organization's work more difficult, but also pointed to the polling results.

"There just seems to be this false belief that most Idahoans are against LGBT equality," Morales says. "It is the responsibility of our policymakers and elected officials to really take what for them would be a bold position, but really it's a right position to take." ♦