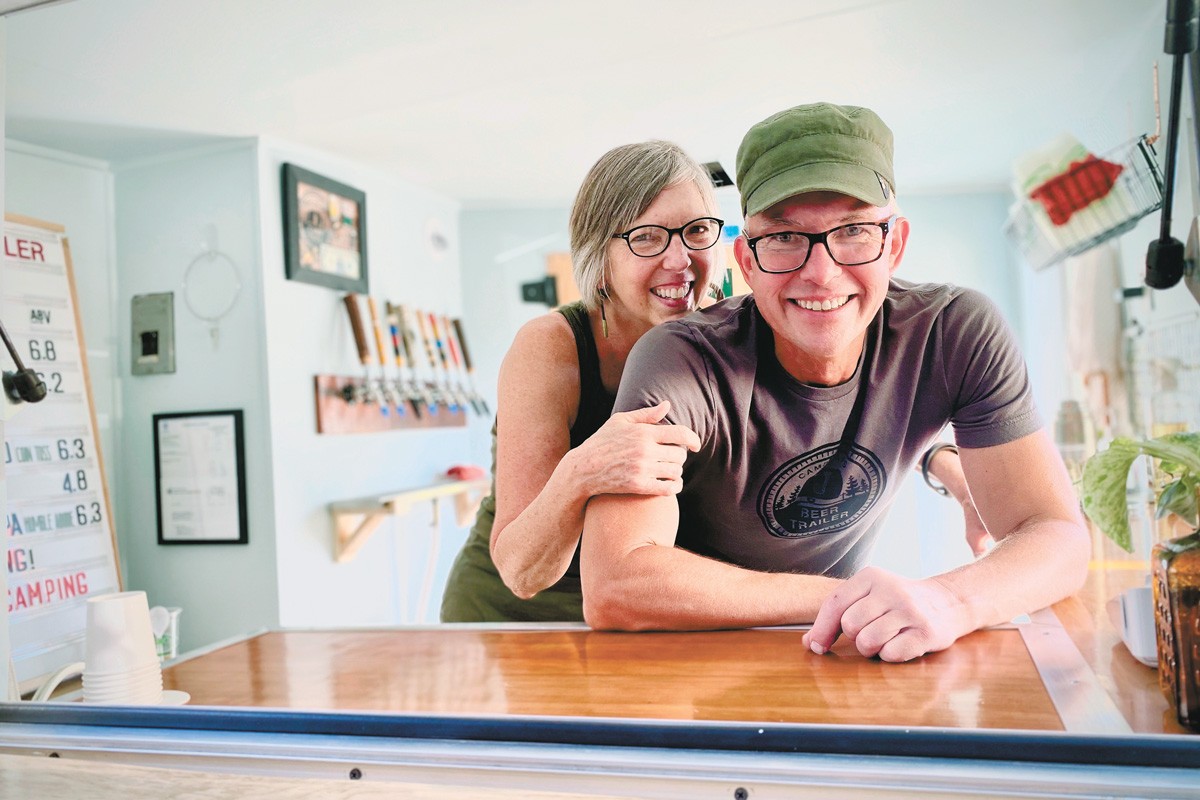 When Blaise Barshaw and Laurie Ann Greenberg approached local and state government agencies with the proposal for their seasonal beer trailer, Camp Taps, they were mostly met with skepticism and hesitation.

It took months to get clearance for the idea at various phases of construction and implementation, but Camp Taps in the North Monroe Business District finally got the nod of approval from the Washington State Liquor and Cannabis Board, and opened last week.

"I called Liquor Control, and talked for like an hour explaining what I wanted to do with the beer trailer, and they were having a hard time wrapping their brain around it," Barshaw says. "No one had ever done this before."

Located in the back corner of the parking lot for local vintage and antique shop 1889 Salvage Co., Camp Taps is a cozy, intimate bar, with capacity for only 12 people in its tiny enclosure, which is open to ages 21 and over.

The bar itself is a 1969 camp trailer the couple completely gutted and retrofitted, with a space in the front end to cool and store kegs for its eight tap handles.

All of those taps showcase regional craft beers, and everything is $6 a pint. Upon its opening, featured breweries included nearby Bellwether, plus Mountain Lakes, Lumberbeard, YaYa, Humble Abode and the Golden Handle Project, and a regional guest tap with Coin Toss Brewing in Oregon.

"All the microbreweries around here, everyone has been so nice to us and so helpful," Greenberg says. "That is what is really nice about the beer community and craft beer. Everyone is on each other's side."

Barshaw and Greenberg, both professional artists, say their initial plan was to open a permanent venue that paired craft beer with arts and served as more of a community creative center. But finding a location that didn't need extensive and expensive renovations proved difficult. After both lost their part-time jobs in retail and the service industry when the pandemic hit last spring, they had more time to focus on retooling their vision into the beer trailer concept.

"We originally thought of having the trailer with beer and this big deck and a yurt out here for all-year use that was heated, but we went to the city and they listened to our idea, and it ended up being unfeasible," Barshaw says.

While Camp Taps is theoretically mobile, the couple plan to operate it seasonally at its current spot from April through mid-fall. When the trailer's front end is filled with kegs, it can't easily be moved anyway, and due to the restrictions of their operating licenses, it also can't travel around like a food truck can.

When Camp Taps is operating most afternoons and evenings, drivers along North Monroe may notice Barshaw's hand-painted sandwich board signs out on the sidewalk with a red stop sign symbol and the word BEER in the center. He also designed the trailer's logo, which is featured on screen-printed T-shirts for sale in Camp Taps' tiny "gift shop," along with 16-ounce, cup-sized koozies, stickers and postcards to "send from camp," Greenberg says.

Each of the trailer's tap handles is made from repurposed finds from some of the many antique shops along Monroe Street, including a 1920s flashlight, and badminton and croquet racket handles. The seating area around the beer trailer is mostly covered and walled off to create a shady hangout, with bar stools that pull right up to the trailer's two windows.

Customers can bring in their own food, but must follow the camp rules to "pack it in, pack it out," as well as to be kind, make friends and not smoke.

Since the trailer is too small to hold a dishwasher for pint glasses, beer is served in compostable single-use cups, which the couple are currently trying to figure out how to recycle locally, since they can't go into the city-issued yard waste bins. Camp Taps' owners hope next year to offer some version of a mug club, perhaps by selling reusable aluminum vessels that customers can bring back to use and get a discount on beer in return.

"There is something for everyone," Greenberg says. "It's kind of fun. It's different and unique and is like coming around the campfire. You can't get lost here." ♦

The original print version of this article was headlined "Happy Camper"