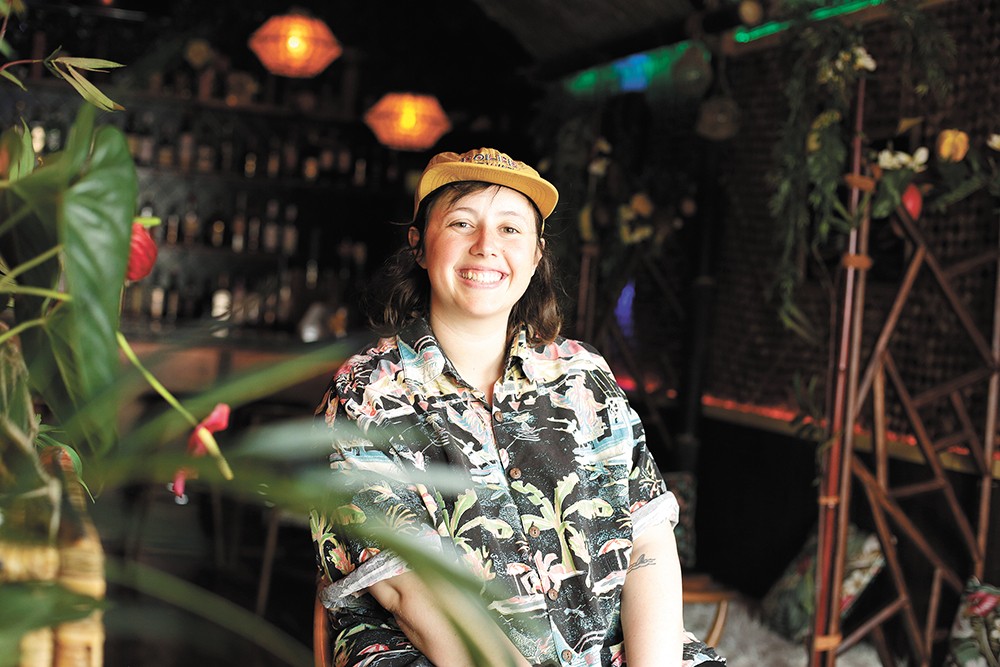 There's a place downtown where you can almost believe you've been magically transported to a beach on the South Pacific.

"I wanted it to feel like the inside of a small shack," says Tiny Tiki owner Claire Fieberg. "We wanted it to be comfortable and warm and inviting."

Other tropical details include a focal wall above the bar covered in green faux fronds and leaves with bright hibiscus blossoms scattered between. The furniture is a mix of richly stained woods and vintage-style wicker. Carved wooden masks hang on the walls between vintage velvet paintings of beaches and florals.Some of the bar's decor came from Fieberg's family's personal collection of tiki-themed home decor, while other pieces were gifted to her by friends, or found locally.

The Southern California native opened the Tiny Tiki in early May, and says she wanted to create a place that "would be an escape from the cold winter of Spokane and transport you to a totally different world."

To that end, the menu is, naturally, focused on ice cold rum-based drinks with plenty of fruity, tropical flavors like coconut and pineapple. Fieberg makes her mai tais ($8) daily in three-gallon batches of dark, aged rum, lime juice, orange liqueur, simple syrup and orgeat (almond-flavored) syrup so that she can put it on a nitro tap. The end result is a creamy blend that helps speed up orders at the bar, too, since she's usually the only one working.

Other classic tiki bar drinks on the menu include the Painkiller ($8), a mix of dark rum, coconut cream, pineapple and orange juices with a sprinkle of nutmeg on top. Fieberg nixed from the menu shortly after opening, however, a famous tiki classic called Zombie due to how complex it is to make, replacing it with a different retro cocktail classic, the Jungle Bird.

"When it's busy and it's full, I want to make sure I'm getting drinks out as fast as possible, but still have high quality," she notes.

Bubbly La Croix cocktails ($8) are also on the menu and come with the addition of rum, lime, simple syrups and orange liqueur. There are a few classic non-rum drinks as well, along with three rotating craft beers on tap, and some in cans.

Most of the tiki drinks are served in handmade, logo-stamped mugs made locally by KJ Pottery. All drinks, of course, come with fun garnishes like edible flowers and paper umbrellas.

Fieberg's original plan was for the Tiny Tiki to offer loaded tater tots as a snack, but since the bar's kitchen is tiny, and an oven would put out a lot of heat, she's put that idea aside for now and instead hopes to partner with local food trucks to set up outside.

Some locals may recognize Fieberg while she's behind the bar five nights a week. She plays drums for the local group Super Sparkle and previously tended bar at the Bartlett music venue.

The spark of an idea to open a tiki bar came to Fieberg after visiting similar themed establishments in bigger U.S. cities, where the trend has recently seen a major revival.

"I knew Spokane didn't have one, which was a huge thing because in bigger cities it's hard to find a niche that hasn't been filled," she explains. "But the other part is that my family has always been into anything tropical. We grew up going to Hawaii in the summer, and that was a huge inspiration for me. I love anything to do with Hawaii and tropical culture." ♦

The original print version of this article was headlined "Tropical Getaway"