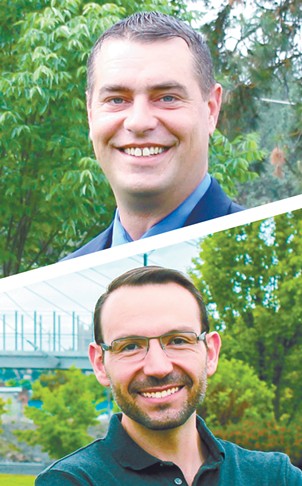 There's not a lot the two candidates jockeying to represent Northeast Spokane on the Spokane City Council don't agree on. Both Michael Cathcart, director of the pro-business group Better Spokane and a former legislative aid in the state Senate, and Tim Benn, the chair of the Minnehaha Neighborhood Council and radio talk show co-host, are conservative. They both, for instance, want to increase the number of police officers and pave the numerous dirt roads in the district.

But that hasn't stopped them from taking shots at each other as the city hurtles closer to the Nov. 5 general election. Benn slams Cathcart as beholden to special interests that have donated heavily to his campaign — like the Spokane Association of Realtors — while Cathcart, in turn, paints Benn as unfit for public office.

"I think he just doesn't have the energy or the ability to forge the relationships to actually get policy to move that's going to benefit the district. And I think that is a substantial difference," Cathcart tells the Inlander at the Forza Coffee Company on North Hamilton Street. (He says the coffee shop is one of his favorite places in North Spokane.) "It's one thing to go on the radio and scream and yell about issues that you hate. It's another to build relationships to actually advance those policies to get them across the finish line."

Benn fires back that he is a man of the people whose priorities aren't skewed by heavy-weight interest groups throwing gobs of money around in the 2019 election.

"He might have friends in Olympia, he might have powerful business groups that he knows, but when it comes to representing the people, I know the people," Benn says while sitting on a chair inside Little Precious One's, a child care business in Northeast Spokane's Minehaha neighborhood that he and his wife run. "I won't have the marketing campaigns that he will. But we'll see if the people want to buy a big marketing campaign or if they want to buy local and elect someone who is one of them.

"He's going to work for the people that got him into office," Benn adds.

Both Benn and Cathcart rose out of a crowded field. Last year, Councilman Mike Fagan, who has represented Northeast Spokane since 2011, announced that he would run for council president. Fagan, however, didn't make it through August's primary, and in the race for the seat he's vacating, Benn came in first with 2,370 votes while Cathcart landed second with 2,121 votes.

Reflective of the political diversity of the district, two of the more liberal candidates in the race, Spokane Public Schools board member Jerrall Haynes and community organizer Naghmana Sherazi, came in fourth and third, respectively, in the primary. Meanwhile, Councilwoman Kate Burke, a lefty voice in City Hall, represents the district's other seat on the council.

Despite coming in second, Cathcart says he feels like he's the "frontrunner." He's got endorsements from local officials like Spokane County commissioners Al French and Josh Kerns, Spokane County Sheriff Ozzie Knezovich and organizations like the Spokane Home Builders Association. His campaign war chest is stocked with roughly $40,000 in contributions, with big donations from the Spokane Association of Realtors, according to the state Public Disclosure Commission.

"It's one thing to go on the radio and scream and yell about issues that you hate. It's another to build relationships to actually advance those policies to get them across the finish line."

Benn, meanwhile, has about $16,000 in contributions and no burgeoning endorsement list, aside from Fagan, who co-hosts Right Spokane Perspective, a conserative radio show, with Benn.

But he stresses that he's banking his campaign on grassroots support in the community to push him across the finish line. He points out that while he's lived in the area for most of his adult life, Cathcart only moved into the district a few years ago: "I don't know how he can know what's going on in the district, know where the issues are," Benn says.

Cathcart argues that Benn lacks the ability to have working professional relationships with officials and stakeholders. As evidence, he cites an instance in 2017 when Benn stood on a stage at a conservative rally alongside Fagan and projected an image of Burke with Bill Clinton — Benn was running against her at the time — while Fagan said in a crass reference to sexual misconduct allegations against the former president: "Hey, where's Bill's hand?"

"Putting up photos of Bill Clinton and asking where his hand is? How inappropriate is that?" Cathcart says.

When it comes to policy issues, both candidates are largely in lock-step with one another. They both generally argue that Northeast Spokane doesn't get its equitable share of city investment in infrastructure projects. They also both want the Police Department to move to a community-policing model where officers proactively patrol beats.

Disagreement comes on some of the details: Benn criticizes Cathcart's decision not to vote for the public safety levy that passed in February, which will pay for an additional 20 police officers and 30 existing firemen.

"I voted for the public safety levy because we've got to start somewhere," Benn says. "It's an empty promise that you yourself weren't even willing to vote to add more officers, but you tell the public you want 50 more when they voted for 20 more and you didn't vote for any more."

Cathcart defends his vote by arguing that the levy was misleading: "The levy was a fire levy, and they threw in officers to try and sell it to the public," he says.

He adds that he'd first take a "scalpel" to the city budget to look at "unnecessary spending" that could be redirected to the Spokane Police Department before considering new taxes.

On homelessness, the differences are only in degrees. Benn argues that the region's homelessness problem is really a drug addiction issue, and that the city needs to crack down on dealers to cut down on the supply of addictive illicit drugs like heroin. He adds that he's skeptical of data in Spokane's most recent Point-In-Time-Count survey that found that family conflict and a lack of income were the two most frequently cited reasons for why people were homeless: "Drug addicts are great at lying to people, right?"

He also says that he wants to "criminalize open drug use," though he refrains from explicitly endorsing incarcerating drug users: "I think we need to have a conversation about how we're going to handle that, but we can't continue to allow it."

Cathcart, meanwhile, says that the system should try to divert nonviolent and first-time offenders into mental health services and drug addiction treatment if possible. But recidivists should "go to jail and stay in jail." And, ultimately, if services are lacking, incarceration is still necessary for drug users, Cathcart argues: "You cannot leave them on the street," he says.

On housing, both candidates agree that the city needs to increase its housing supply — and that District 1 doesn't necessarily need widespread upzones to accommodate additional housing development to ease the city's tight rental market. They point to the numerous vacant lots in Northeast Spokane as ripe for potential development.

When it comes to the Office of the Police Ombudsman, Cathcart is unequivocal about his support for the independent watchdog of the city's Police Department. Benn, however, says that the office is more of an "observer paperwork position" and that there are existing avenues for holding police departments accountable, like outside law enforcement agency investigations. ♦