When does a state senate race revert to the third grade? Answer: After $600,000. 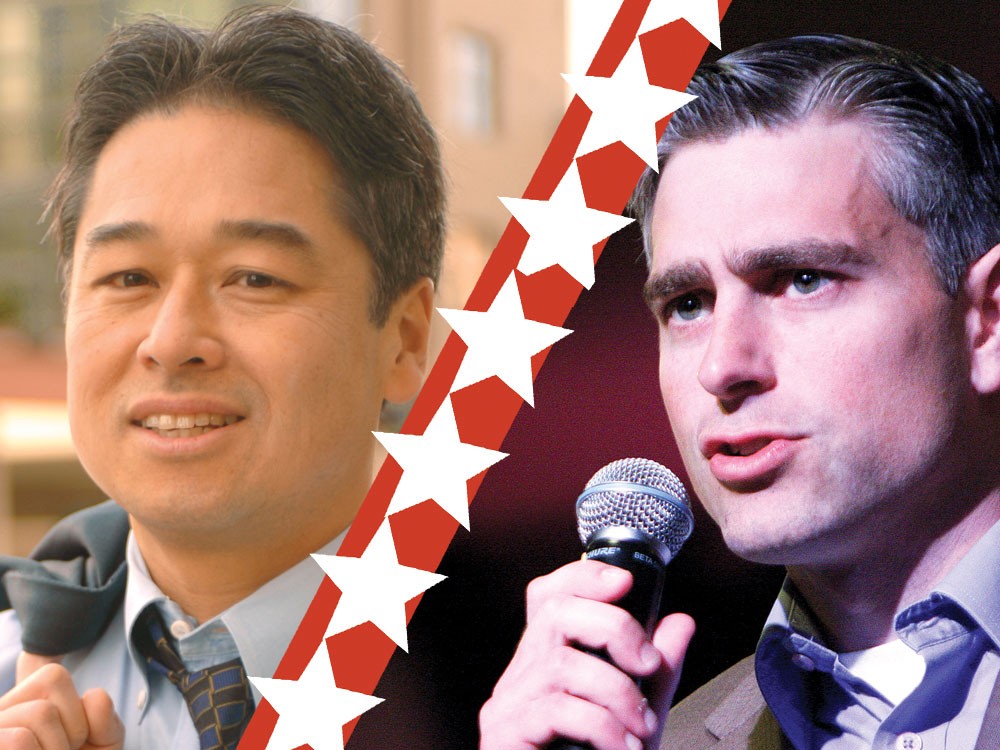 Political forums are usually as dull as they sound. But every now and again, when the jockeying is heated enough, jabs and biting one-liners pepper the exchange and signal a debate freighted with importance — and maybe a little desperation.

In other words, it’s on.

Such a thing happened last week in a downstairs ballroom of the Spokane Club.

With a constant backdrop of tinkling silverware, Democratic state Sen. Chris Marr and his Republican challenger, Michael Baumgartner, faced off in a debate sponsored by the Spokane Rotary Club.

Podium to podium, the two men launched volleys at one another — Marr saying his opponent “needs to go back to Harvard and work on his math,” Baumgartner feigning irritation and uttering, more than once, “It’s interesting what you hear in an election year.”

But in this race — one of the hottest, costliest, most closely watched contests in Washington — what are we hearing this election year? Both men say we should stick to the issues, but then degrade to name-calling, insults and exaggerations.

“It shows how desperate he is,” Baumgartner says of the venomous tone of the campaign, something even the Spokesman-Review has called “juvenile.”

Sharp elbows aside, here’s what we know about the two men.

Marr is generally considered a centrist senator with deep connections in both the local and state business world. (Just look at some of his contributors: Anheuser Busch, Burlington Northern Santa Fe, Boeing, Spokane Teachers Credit Union and Walgreens.)

Baumgartner is a well-educated political newcomer who has spent his entire adult life living in embattled regions of the world, both as an advisor to the U.S. State Department and a business consultant. Spokane, he says, is home.

But again, just briefly, back to what they’re saying about each other:

“He’s not a veteran,” Marr says. “Here’s the thing, you can’t go around with campaign literature with you in a flak jacket, a guy with an AK-47 behind you, saying you served and be surprised when people get that impression that you’re a veteran. … The whole thing is murky.”

But by sticking to the issues, a picture of the men becomes clear.

Marr says his No. 1 issue is moving forward with the Spokane “agenda” that has been built in the last 10 years: completing the North Spokane Corridor (better known as the North-South Freeway), advancing the University District and further elevating Spokane as a regional health care hub.

On these issues, Marr has been outspoken. For the corridor, Marr — who once sat on the Washington State Transportation Commission — helped craft an agreement that downsized the project, allowing it to get a recent $35 million infusion from President Obama’s stimulus package.

He was called the 2010 “Legislator of the Year” by Aging Services of Washington, and given the “Health Care Champion” award by the Community Health Network of Washington in 2007, the last year the organization gave out such an award.

In 2008. Marr secured $2.4 million to help complete the $11 million Riverside Avenue extension, which many say will help spur further development on Riverpoint Campus.

Baumgartner, who says he supports all three endeavors, “has no way to move these forward,” Marr says. “The Republicans voted against the capital budget. One assumes he’ll stick with his caucus and vote against it. How do you build a nurses’ building without a capital budget?”


The paramount goal of his campaign, Baumgartner says, is to highlight what he sees as a major difference in political philosophies between himself and Marr.

As a darling of the GOP — and a headliner at a recent Tea Party rally in downtown Spokane — Baumgartner is allied with the local conservative political movements. Still, staking either man on opposite poles of the political spectrum is hard to do.

In the past legislative session, Marr voted against Senate Bill 6143 three times, once in regular session, and twice in special session. It passed anyway, raising candy, beverage and other excise taxes. Marr also voted against the state budget numerous times, arguing for lower taxes and more cuts. He’s spoken out against Initiative 1098, which many see as an attempt to create parity in one of the most regressive tax environments in the country by taxing the top 1.2 percent of Washingtonians.

These actions, Baumgartner says, were done as an election-year ploy to win votes.

“His actions and words — in an election year — say he’s a moderate,” Baumgartner says. “Just go down the line. Do moderates support government-run health care? Chris Marr supported Obamacare, signed a petition as a strong supporter of public-option health care. … Chris Marr’s [pro-business voting record as rated by the Association of Washington Business] is at 43 percent. That’s after a year of doing all the quote-unquote conservative stuff to get on there. He was at 22 percent his first term. That’s extremely far to the left.”

In Olympia, the question of Marr’s ideology isn’t as settled.

Republican state Sen. Mike Hewitt, the minority leader from Walla Walla, agrees with Baumgartner, unsurprisingly. “When Chris came to the Legislature, I thought he came as a business Democrat. I thought I’d never get a shot at this seat again,” Hewitt says. “He voted for increased spending for his first three years. Now, he’s a chameleon.”

Dwight Pelz, a former state senator and King County councilman and current chairman of the state Democratic Party, disagrees with Baumgartner, predictably. “He’s a moderate Democrat,” Pelz says of Marr. “We’ve got a bell-shaped curve in the caucus. He’s on the conservative side of that curve and that’s fine by me.”

As for Baumgartner, his lack of a legislative voting record doesn’t encourage much scrutiny, but he says the role of government should be reduced, focusing on public education, transportation and public safety. Everything else is on his target.

Privatizing liquor sales? He supports it. Freezing salaries for public employees making more than $100,000 a year? Definitely. Contracting out some services currently provided by state workers? Do it.

But, despite his knack for wonkishness and policy-speak, he’s sometimes short on specifics.

The state faced a $2.6 billion deficit this year. Asked where would he cut to make up for this shortfall, Baumgartner says he’d prioritize state spending, restructure the government and begin “surgical” cuts. To the point, he’d privatize liquor sales and do away with the state’s “printing press.” But he couldn’t specify how much this would save the state, nor would he venture a guess.

This year, the state had an operating budget of $33.6 billion.

That’s too much, he says. Asked how much the state should be spending, he answered, “Five percent less than the expected revenue.” What this would calculate out to be this year or next, he didn’t know.


“This will live up to the expectations as the most expensive legislative race in history,” Marr says. To date, Marr has “This raised almost $400,000, and Baumgartner’s brought in more than $220,000. “We have, at the very least, a horse race.”

Moving forward, Marr sees political posturing from his opponent. “He’ll pander to the far, far right and then pose … in order to placate the moderates,” Marr continues. “Far-right Republicans might have peaked a little bit early. But I think it’s going to be a tight race and it will be going into the election.”

Baumgartner — who finished almost seven percentage points ahead of Marr in the primary — isn’t as sure.

“Marr knows that if this election is about spending, taxes, the business environment, then I’m going to win,” he says.

“Because he has a clear record on those things and I have clear views on those things. If he can make it about things that aren’t germane to that or isn’t specific to that, then, well, we’ll see.”