Notes from a season with the Seahawks 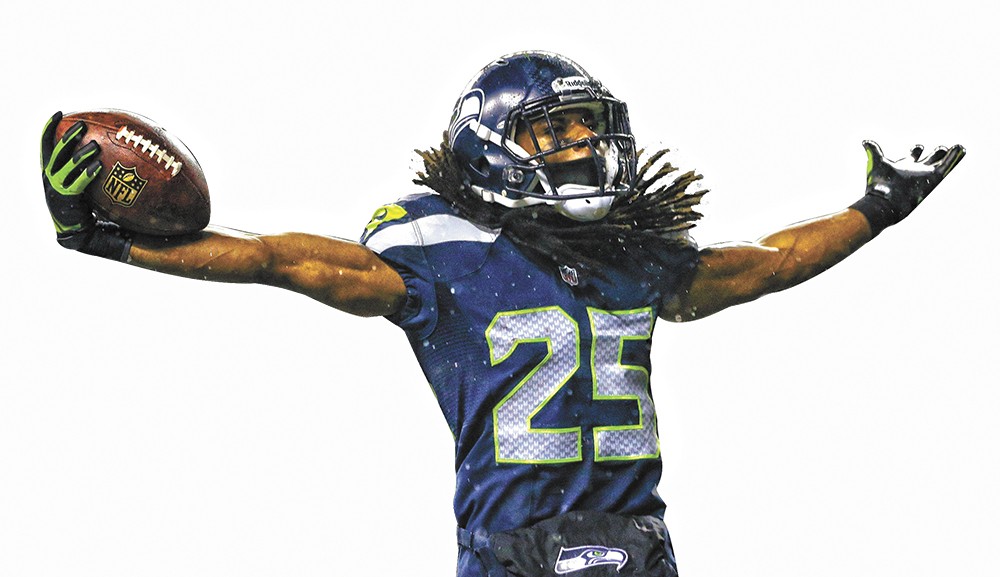 found itself torn between excitement and that familiar you-just-jinxed-it feeling when sports talk guys, bar denizens and overly friendly neighbors speculated that the Seahawks had the tools for a repeat Super Bowl victory. Somehow, they're now one step away from making that happen, but it took a comeback from an early season spent on the ropes, one that was capped by the comeback of all comebacks. In case you forgot, here's how the Hawks ended up in Phoenix.

Week 1: Playing in the season's first game, the Seahawks embarrass the Packers in Seattle, 36-16. Sports radio all but guarantees the Hawks will dominate from here on out. Lynch runs for 110 yards and two touchdowns, but doesn't brag about it in the media.

Week 2: Playing in melt-your-cleats temperatures in San Diego, the Seahawks lose in awful fashion. Must have been the heat, we're told.

Week 3: Widespread loss of faith is salvaged when Russell Wilson leads an overtime drive to beat the Broncos in a rematch of the Super Bowl.

Weeks 4-6: Coming off a bye week and then a win against the Professional Football Team of Washington, D.C., the Seahawks meet DeMarco Murray and the goddamn Dallas Cowboys and get beat up in a 30-23 win in Seattle where such things are not meant to happen.

Week 7: They trade Percy Harvin. Yes, he of the $67 million contract and frequent injuries and Super Bowl heroics. No one seems to care that he's gone except for Lynch, who tries to stage a boycott by refusing to board the bus to the airport en route to St. Louis. Speaking of St. Louis, the Seahawks lose to the St... Louis... Rams? Now 3-3, Seattle looks far removed from its destiny. Some bandwagon fans neatly and symbolically fold up their Wilson jerseys.

Weeks 8-10: While fans might be nervous, Pete Carroll just pops in other stick of gum and engineers an ugly 13-9 victory at Carolina and a closer-than-needed win over Oakland. Then Eli Manning comes to CenturyLink and cries his way through a 38-17 loss that sees the Hawks' ground game come back to life, thanks to some healthy linemen and some extra Carroll-led yoga sessions at practice.

Week 11: It's a Sunday in mid-November and the Seahawks are in Kansas City. They lose and fall to 6-4. It looks like they'll need to win two games against Arizona and two more against San Francisco to win the division. The only "easy" game left on the schedule is a season finale with St. Louis, and they've already lost to the Rams. Ugh.

Week 12: Funny what a win can do, eh? Especially a 19-3 crushing of the alleged best team in football, which is the Arizona Cardinals at this point in the season. Lynch talks to the media after the game, answering every question simply with "yeah." Most fans agree with him.

Week 13: It's Thanksgiving evening and you can probably feel the last helping of mashed potatoes gyrating in your belly as you celebrate Richard Sherman intercepting his second Colin Kaepernick pass. Sherman tops things off by eating a turkey leg with Wilson on the 49ers' midfield logo. Maybe it's the bottle of holiday cheer you've been sucking on, but things seem to be on the right track.

Weeks 14-16: Getting in the Seahawks' way will get you killed. Just ask Chip Kelly's Philadelphia Eagles, blown up by Bobby Wagner and Seattle's suddenly rejuvenated defense, or the 49ers, who suffer a second beating in three weeks. Or the entire state of Arizona, embarrassed into hiding after Lynch, who missed the first quarter with an upset tummy, bulldozed half a dozen defenders in the best run of the NFL season. "I appreciate your concern for my stomach," he tells reporters.

Week 17: They said the Hawks were done, but they win that sixth-straight game against St. Louis. Home-field advantage, a No. 1 seed, a week to rest up... this is sounding familiar.

NFC Divisional Playoffs: Kam Chancellor jumps over the Carolina blocker lined up opposite him. Then he does it again. Sure, they make the field goal, but the damage is done. The Panthers are unnerved, probably why Cam Newton tosses a pick to Chancellor, who takes it 90 yards for a touchdown, leaving those fire-streak things from Back to the Future on the field.

NFC Championship: The Packers are up 16-0 at halftime. Maybe we should just switch it over to whatever rom-com TNT is airing and start the grieving process, so as not to witness the slow and ugly death of our hopes and dreams. Oh, but wait... A touchdown pass on a fake field goal from the Canadian holder to a 300-pound reserve offensive lineman? And then a huge drive? How about a successful onside kick? Marshawn Lynch begins forcing Packers to renounce their manhood with one run after another, and then a touchdown? A Hail Mary two-point conversion? A won coin toss in overtime? A bullet to Jermaine Kearse from the man who'd thrown four interceptions? Sure, why not? Let's go to Phoenix, people. n