The U.S. has joined secret talks with Israel and the UAE. The topic? Iran. 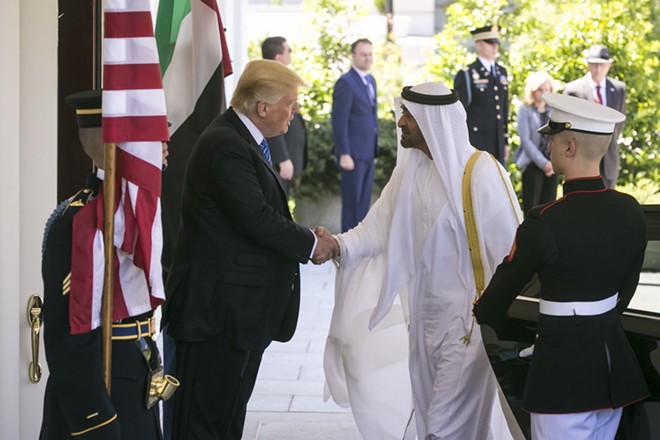 Al Drago/The New York Times
President Donald Trump welcome Crown Prince Sheikh Muhammad bin Zayed Al Nahyan of Abu Dhabi to the White House in Washington, May, 15, 2017. The United States is participating in secret talks between the United Arab Emirates and Israel to confront threats posed by Iran, a shared adversary among the three countries, a foreign official with knowledge of the diplomacy said on Aug. 15, 2019.
By Lara Jakes and Edward Wong
The New York Times Company

WASHINGTON — The United States is participating in secret talks between the United Arab Emirates and Israel to confront threats posed by Iran, a shared adversary among the three countries.

The talks aim to broaden cooperation for military and intelligence sharing between the UAE and Israel, two cautiously allied Middle Eastern nations, a foreign official with knowledge of the diplomacy said on Thursday.

The UAE and Israel already share some security connections, experts said, and have held below-the-radar discussions in the past. Both view Iran as a top threat to the region, and Israel has sold fighter jet upgrades and spyware to the UAE.

But including the United States in a new phase of security talks could signal the UAE’s intent to demonstrate its commitment to the Trump administration’s so-called maximum pressure campaign against Iran — even as Emirati officials have stepped back from some of their own hard-line policies targeting Tehran.

Neither the State Department nor the Israeli Embassy in Washington responded to requests for comment, and Emirati officials refused to discuss the issue.

Emirati officials are trying to “strike a very careful balancing act,” said Ilan Goldenberg, the director of the Middle East Security Program at the Center for a New American Security.

“They want to signal to the Trump administration and members of Congress — especially Republicans — that they aren’t walking away from the administration’s policies and the maximum pressure campaign against Iran,” he said.

The UAE and other Arab states are generally careful to avoid appearing too close to Israel, given longstanding disputes over the rights of Palestinians and access to the al-Aqsa Mosque in Jerusalem, one of the holiest sites in Islam.

Goldenberg said it was surprising that Emirati officials would agree to allow the United States into its long-standing and secretive talks with Israel.

“It is a sign they are willing to lean further forward, that they are not as worried about secrecy as they were,” said Goldenberg, who worked on regional security issues at the State Department and Pentagon during the Obama administration.