The Way We Were

When a band gets back together, some people get really excited. Others get really pissed. 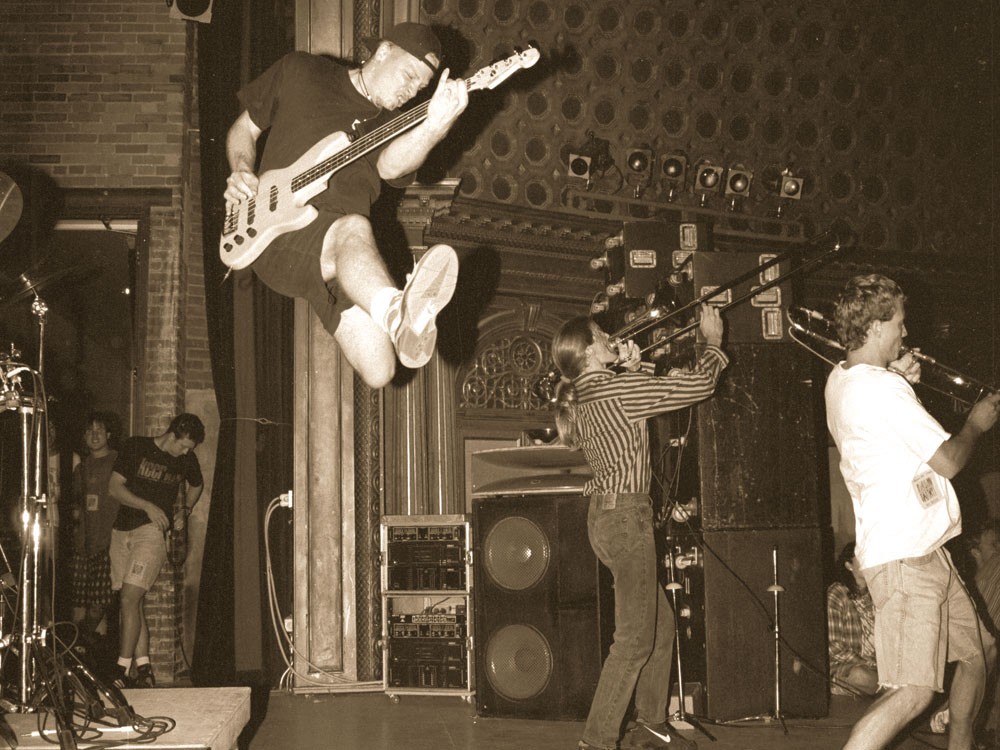 People will inevitably laugh at how they’ve grayed, snicker at how their bellies have swelled. It could be the Pixies, Led Zeppelin, Pavement or, as in this case, a regional favorite like Black Happy. No matter who it is, when an old band gets back together, it’s what’s different about them — do they sound the same? Are they as energetic? Are they fatter? Slower? Can they still play? — that gets people talking.

Band reunions are like high school reunions; a rehashing of the old days, or an attempt to relive, at least for a moment, the glorious excitement of youth. But for others, it’s reviving a long-dead enemy, jump-starting a band people hated then and loathe even more now for getting back together.

Black Happy — a North Idaho band that made waves in the mid-’90s Northwest music scene with their unlikely matching of grunge and funk — is no exception. The band hasn’t played on a stage together for 15 years. But the people who hated them back in 1995 hate them today as if they just broke up.

Local scenesters remember why they loved (and why they hated) North Idaho’s best-known grunge-era band.

“There was something just absolutely manic about the way they tore around the stage, whipping the crowd into a frenzy. More than any Orange County ska band of the late 90’s, 10 Minutes Down drew its inspiration from the stage presence of Black Happy.”

“I was 17 in 1990 when they got started and I saw them at some all-ages gig. I danced and had such a blast that I made it my mission to hit every show of theirs that I could.”

“I remember going to see them in Coeur d’Alene in ‘92 along with probably 30 other LC kids. I was into Fishbone and RHCP back then so I was a sucker for their sound.

“Black Happy was beneath my contempt,” Jon Brown, an occasional Inlander contributor and guitarist in on-again/off-again band Pour Soi, says. “[Black Happy] was terrible in the way that music is when you recognize the skill of the players but cannot identify with any of the sounds they make. I wanted them to be good, but they were not.”

But some remember them fondly — connecting nostalgic stories of youthful rebellion with Black Happy.

“My sophomore year of high school [at Gonzaga Prep], I was wearing a Black Happy shirt. My religion teacher told me I had to take it off or she would send me to the office. Needless to say, I ended up in the office,” says Patrick Kendrick, who runs Platform Booking locally.

“The vice principal put his foot down and gave me a shirt to change into. So I went to the bathroom to change,” Kendrick continues. “I put the shirt he gave me in the trash, my BH shirt in my back pocket, wrote Black Happy on my chest with a Sharpie and walked back into his office. My mom picked me up out front 20 minutes later.”

Sitting at Empyrean last week, Jay Carkuff and Jim Bruce laugh as they look at the stage. They’re explaining how their guitar player kicked a hole in the wall there once. He was trying to run up it during a show.

“It’s just weird how little has changed here,” Bruce, the drummer for Black Happy, says. “The stage is almost identical.”

The band played here more than once back in the 1990s. It was the Big Dipper then, a place that showcased Northwest bands like Tree People and Everclear. From there, Black Happy toured heavily — playing South by Southwest, the CMJ Festival and landing an opening spot for 311 on a southern tour of the U.S. But after five years, the eight-man band called it quits.

Carkuff, 42, and Bruce, 39, talk about how a Black Happy reunion is something the long-retired band has been talking about for years. But with members flung from Spokane and Coeur d’Alene to Seattle, San Francisco and St. Louis, the idea was one they knew would be difficult to pull off. It was so unlikely, Carkuff — who plays trombone in the band — says he didn’t believe it would actually happen.

“I actually was probably the last one to know,” he says. “I was hearing rumors from people who wouldn’t know this sort of thing. They’d say, ‘I heard your band’s getting back together.’ ‘Oh, really? I didn’t.’ And that was going on for about five years.”

“And then, one day … Jim called and said, ‘Hey we’re thinking about getting back together for a reunion show.’”

Carkuff, who works at a Post Falls Taco Bell, says he’s had to re-teach himself to play the trombone for the five Black Happy reunion shows. And though Bruce — who is married with three children — says he’s continued to play drums through the years, he’s still got stage energy to work on.

Back in the day, the band was known for literally bouncing off the walls at shows. Knowing old fans will expect that from their performances, Bruce says he’s been trying to prepare.

“A 25-year-old can run better than a 39-year-old and jump around better,” he says. “I’ve been running and trying to get in shape and trying to eat right. Because the reality is I can see myself jumping around and pulling a hammy and then I’m limping off the stage.”

But even more, the band — who only kept in loose contact with each other — has had to rekindle relationships that were soured with the breakup.

“There was very little interaction,” Bruce says. “We’re able to put a lot of that stuff behind us. Yeah, there’s the occasional attitude of, ‘Oh yeah, that’s why we broke up.’ But largely I think it’s been pretty positive.”

Black Happy plays with Kari Marguerite & the 76 at the Knitting Factory on Friday, Aug. 6 and Saturday, Aug. 7, at 8 pm. Tickets: $20. Friday show is sold out. All-ages. Visit www.ticketfly.com or call 877-435-9849. The band also plays three shows in Seattle later this month. Visit www.blackhappy.net for details.