The Wheat of Tomorrow? 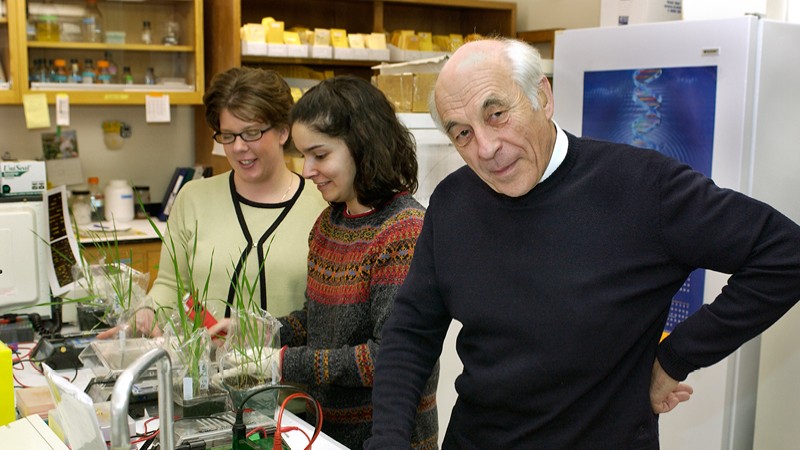 For people with gluten intolerance, there are the obvious hurdles and the hidden threats.

Obvious: bread, pizza, pasta, baked goods. Not so obvious: soups, salad dressings, processed meats and other foods where starches are used as a binding agent. The bottom line: almost anything can hurt you.

For bakers and chefs, the whole thing can mean different pots and pans or an entirely separate kitchen to create something truly gluten-free.

But if the work of a team of researchers based at Washington State University succeeds, the chore of eating or cooking for those with negative reactions to gluten could become as easy as buying a new brand of wheat flour.

As researchers around the globe look for medicines that people with gluten intolerance could take to mitigate their negative reactions, Dr. Diter von Wettstein and his graduate students in WSU's Department of Crop and Soil Sciences have been trying to change the wheat itself.

Gluten is not synonymous with wheat, but is a set of proteins found in wheat and other grains. People with the inability to digest the proteins can suffer everything from an upset stomach to death, so eating gluten-free can range from a preference to a life-or-death necessity. Most who avoid gluten turn to completely wheat-free foods or use alternative flours, like those made from rice, beans, potatoes or oats.

To try to combat the negative reaction to gluten, von Wettstein's team has worked to "silence" the proteins that cause negative reactions (but aren't necessary for baking, researchers say). In a lab and greenhouse, they've bred wheat and barley varieties with at least a 75 percent reduction in the harmful proteins and tested them at high temperatures for baking. While von Wettstein hesitates to predict the future, he says his team aims to make a gluten-free wheat available to consumers within 10 years.

The private sector is getting involved too. Davis, Calif.-based Arcadia Biosciences, which also has an office in Seattle, focuses on using technology to make agriculture more efficient and on creating healthier or higher quality foods, like wheat. So when one of Arcadia's scientists was interested in creating a low-gluten or gluten-free wheat, the company joined in WSU's work.

The project has gained notoriety, publication in Proceedings of the National Academy of Sciences of the United States of America and a four-year, $837,000 grant from the National Institutes of Health in 2008. (Now, the team is looking for more funding from the NIH or USDA to continue the work.) The attention is in large part because of more frequent instances of gluten intolerance. About 1 percent of the national population has the autoimmune condition called celiac disease, which causes a negative reaction to gluten, according to the National Foundation for Celiac Awareness. Another 6 percent — or 18 million Americans — have some other type of intolerance that restricts their bodies' acceptance of gluten. In Spokane alone, there are at least 51 restaurants (some with multiple locations) with gluten-free options, according to Gluten Free Spokane, a local blog that tracks the issue.

But the research is not without pushback. With global movements to label genetically modified foods, and a federal investigation into unauthorized "Roundup Ready" wheat found in Oregon that has exporters and their customers on edge, efforts to scientifically alter foods can attract a heavy dose of mistrust. Von Wettstein says when he did similar work in Germany, his crops were destroyed twice. He remains hopeful, pointing to similar battles science has fought to gain acceptance in the past.

"The same will happen with acceptance of molecular genetic modifications in crop plants, and positive results with our present research will help such acceptance," von Wettstein says.

Laura Mertens runs the blog Gluten Free Traveller (glutenfreetraveller.com), exploring the world's options for people with celiac disease or other gluten intolerances. Mertens has traveled to 52 countries on six continents, and since she was diagnosed with celiac disease in 2009, she's been logging gluten-free options she's found along the way and tips for gluten-averse travelers. She's written about salad in Denver and breakfast cereal in the UK, and shared others' gluten-free advice for countries from South Africa to Dubai to Finland. Last December, she posted an entry entitled "Genetically Modified Gluten Free Wheat?" expressing worries about von Wettstein's work, which she'd read about in the Los Angeles Times.

Today, Mertens says she'd rather see scientists investing time and money in finding a cure to the disease that makes her and others gluten-intolerant in the first place, instead of in wheat that's safe for them. She advocates that people suffering from celiac disease find a natural and healthy diet and explore gluten-free flours before they look to products "created in a lab.".

"For people who don't believe in the intersection of science and foods, what they would have to do to practice what they preach is take all the food in their homes and throw it away," he says. "The idea that science shouldn't be involved in food is really not practical."