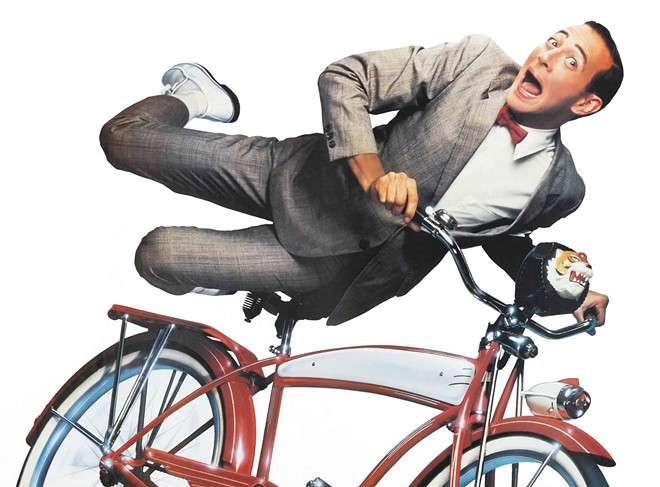 Imagine yourself on Pee-wee's bike.

Going to the movies has always been a form of escape. If a film is really working on an audience, we don't just watch the characters disappear into fantasy worlds but follow right along behind them, as Dorothy emerges into Oz or Neo descends into the Matrix or that one guy whose name I can never remember turns into one of those blue monster things in Avatar. We experience it vicariously, and it can sometimes seem as real to us as it is to the protagonist.

But what if you could walk right into the movie screen and hang out in those strange worlds for real? So many of us are turning to comfort watches in these anxiety-gripped times, which got us pondering what movies we'd actually like to escape into — worlds of fantasy, magic and maybe even danger that are so much more enchanted than our own.

PEE-WEE'S BIG ADVENTURE
When I was a kid, I loved Pee-wee Herman and the candy-colored surrealism of his Saturday morning TV show. But as an adult, I have a totally different appreciation of Paul Reubens' sly, subversive alter ego, and I'm particularly fond of the character's 1985 big-screen vehicle Pee-wee's Big Adventure. The feature directorial debut of Tim Burton, the film is a slapstick, picaresque journey through the tourist traps and roadside oddities of the American heartland, as Pee-wee hitchhikes his way across the country looking for his stolen bike. Big Adventure is still one of my go-to comfort movies because I love spending time in its kooky, kitschy universe, and I think it'd be fun to wander around in it for real. Its vision of the adult world is so charmingly askew, and even the threats Pee-wee encounters — angry bikers, escaped convicts, ghostly long-haul truckers — end up being mostly harmless. Plus, riding around on that sleek red bicycle would be pretty cool. (NW)

THE FILMS OF WES ANDERSON
The shot opens with me standing in an open field of tall grass, perfectly centered in the frame. I'm wearing a pale rose blouse and high-waisted khaki adventure pants caked in mud at the bottom. A large chunk of this Wes Anderson-directed life will find me forlorn and jaded, but there will be pure moments with a few genuine people, with whom I'll share some hard-earned smiles and levity. I listen to midcentury headphones, presumably playing some soft indie anthem with a swelling violin solo. The frame suddenly pans 90 degrees to the right. A man dressed in the same carefully curated color palette of light brown, robin's egg blue and burnt orange, stands symmetrically in the center of the frame, too. He looks dead ahead and sips from a vintage yet timeless red thermos. We don't talk much, but become friends with some odd characters (a talking animal or two, plus an old man with a scary face but a kind heart), as our progress is marked across a cartoon map. It's the life Anderson-otic, and it's the life for me. (SAMANTHA WOHLFIEL)

STAR WARS
There is no emotion, there is peace. That's probably what I'll be reciting during my first few days within the Jedi Order as I meditate and lift some rocks with my mind. Star Wars has always stuck with me from when I was young through the simple idea of being able to move things with the Force. I also feel like if I were in the Star Wars universe, learning to be a Jedi would be optimal, because it'd be a nice spiritual retreat where I can wear comfortable robes and eventually get my own cool lightsaber. I would study neat powers under an accomplished master and then go explore the unusual planets that we see throughout the movies. Listening to the classic cantina music would also be a must, though I'd definitely make myself sparse if I found myself hanging around some unsavory criminals. (JEREMEY RANDRUP)

FOR YOUR EYES ONLY
One could argue that this 1981 James Bond adventure isn't the best, that Roger Moore doesn't have the charm of Sean Connery's Bond nor the gravitas of Daniel Craig's modern version of the British spy. But despite all that — and the franchise's older chapters' outdated attitudes about gender and race — I still would love to join the first Bond I ever saw. The global pandemic means no travel in my immediate real-life future, but For Your Eyes Only globe-trots to stunning spots like a monastery atop a cliff in Meteora, Greece, as well as the Bahamas for some underwater scenes, and the Italian Alps for a classic ski chase down a bobsled run (if you're forgiving of greenscreen antics). I'm not really a "car guy," but the chance to tool around in Bond's Lotus Esprit Turbo would be pretty fun, too. Experiencing For Your Eyes Only as an adolescent made me a Bond fan, and Roger Moore is my Bond. I can watch this over and over and still enjoy its campy humor and stunning scenery. And don't even get me started on Sheena Easton's Oscar-nominated theme song! (DAN NAILEN)

COOL WORLD
Back when rental stores were still a thing, my mom and I would take a regular trip to the now-defunct Peninsula Video for our weekly entertainment. One day, while browsing the kids' section, I found a live-action/animated film that one of the store's employees had grossly miscategorized: Cool World. "Cool," 9-year-old me thought. I popped it in the VCR and watched what looked like an even more perved-out version of Who Framed Roger Rabbit. The story is about a comic book illustrator who is transported into a seedy, drugged out world of his own creation. A detective (baby Brad Pitt) has to prevent him from having sex with a "doodle" — which is inexplicably the worst crime one can commit in Cool World. Despite its many shortcomings, the Cool World universe has a gritty '90s nostalgia that you can almost smell. It's kinda gross, but that's part of the appeal for me. (QUINN WELSCH)

THE LORD OF THE RINGS TRILOGY
My crush on Viggo Mortensen's Aragorn notwithstanding, a trip to Peter Jackson's epic and true-to-source adaptation of Tolkien's beloved Middle-earth saga is an easy pick if I were to escape anywhere fictional. While I wouldn't necessarily insert myself into the Fellowship (can we all agree, though, that it could have used a little more girl power?), a persona as a female wizard (of which there are none) or highborn noble are both aspirational status upgrades well above my lowly place in this world. I'd take my pick of becoming, say, an apprentice to the wise and introspective Gandalf the Grey, or achieving the rank of a noblewoman taking agency into her own hands, like Eowyn of Rohan ("I am no man!"). Besides these specific roles, however, the possibilities for adventure and character development in the high fantasy world of Middle-earth are nearly limitless. One can be the smallest "nobody," like the brave hobbit Frodo Baggins, and adventure will still find you. (CHEY SCOTT) ♦

The original print version of this article was headlined "Cinematic Escapes"