"The Wrong Woman to Mess With"

How Carol Dellinger beat breast cancer and kept on running 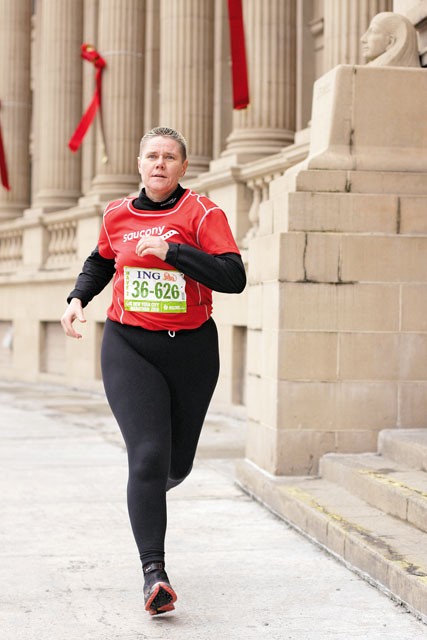 There is no way to keep up with Carol Dellinger. The 48-year-old woman is a caffeinated hummingbird — she talks fast, runs constantly and jokes often.

Carol has a lot of titles — dental assistant, spokeswoman, motivational speaker — but two of her titles are more important than the others.

They’re titles she combines a lot these days. In November, Carol ran the marathon of all marathons: the New York City Marathon. She ran it exactly one year after having a mastectomy. That marathon was the 245th she’s finished.

Carol’s fight against breast cancer is one she intersperses with tales of running. In fact, she found out she had ductal carcinoma in situ (or DCIS, a cancer of the milk ducts) just after running the Portland Marathon.

“I finished the Portland Marathon, went in for a mammogram the next day,” she says. “They called and said there were some irregularities. Right then and there, I knew I had breast cancer.”

“I was non-symptomatic,” she says. “When I ran Portland I ran one of my best marathons. That’s what scary [with DCIS], is there’s no lump. The only way it’s picked up is through a mammogram.”

Carol says she is diligent about having an annual mammogram: her mother died from breast cancer, and she has several family members who have also had the disease.

“And she said, ‘Yes you are, but not from breast cancer.’”

There was no question in Carol’s mind that she could beat cancer, but she had to put running on hold. She cancelled three marathons, though she told Dr. Moline she was committed to running the PF Chang’s Rock ‘n’ Roll Marathon in Phoenix in January. That was nine weeks after her surgery.

“I told her I would be a good kid and do what I was told because I was going to beat this thing,” she says.

After having her right breast removed, Carol eased into exercise again — walking five miles each day.

“At six weeks, I had exceeded expectations. [Dr. Moline] said ‘go, get out of here … run that marathon,’” she says.

And almost nine weeks to the day after her surgery, she crossed the finish line in Phoenix.

“It was the most euphoric feeling crossing that finish line,” she says. “I was back. I felt like, ‘I’m back. I beat this thing. I am a breast cancer survivor.’ I looked death in the eyes, backed up and moved forward.”

And to thank her doctor, she framed her Phoenix Marathon finisher medal for Dr. Moline.

“I told her that it was an honor and a privilege to walk through the doors of Cancer Care Northwest,” Carol says. “[Dr. Moline] carved a permanent place, both across my chest and in my heart.”

After completing that marathon in Phoenix, Carol was back on track to meet her goal of running 500 marathons. New York — which she ran in November 2010 — was No. 246.

“I crossed the finish line of the New York City Marathon, and I had totally kicked breast cancer to the curb. I am 100 percent back.”

Even before breast cancer, Carol’s running goals were ones lots of runners followed online. But after breast cancer, she changed the name of her blog from CarolDellinger.com to WarriorMarathonRunner.com.

“I really feel like I was a warrior that went into battle and came out wounded,” she says.

She says she runs not only because she can, but to celebrate — with each step — that she’s alive.

“Life gave me lemons and I squeezed it into the best damn lemonade you’ve ever seen.”