The Year in Local Music

By Leah Sottile and Jordy Byrd 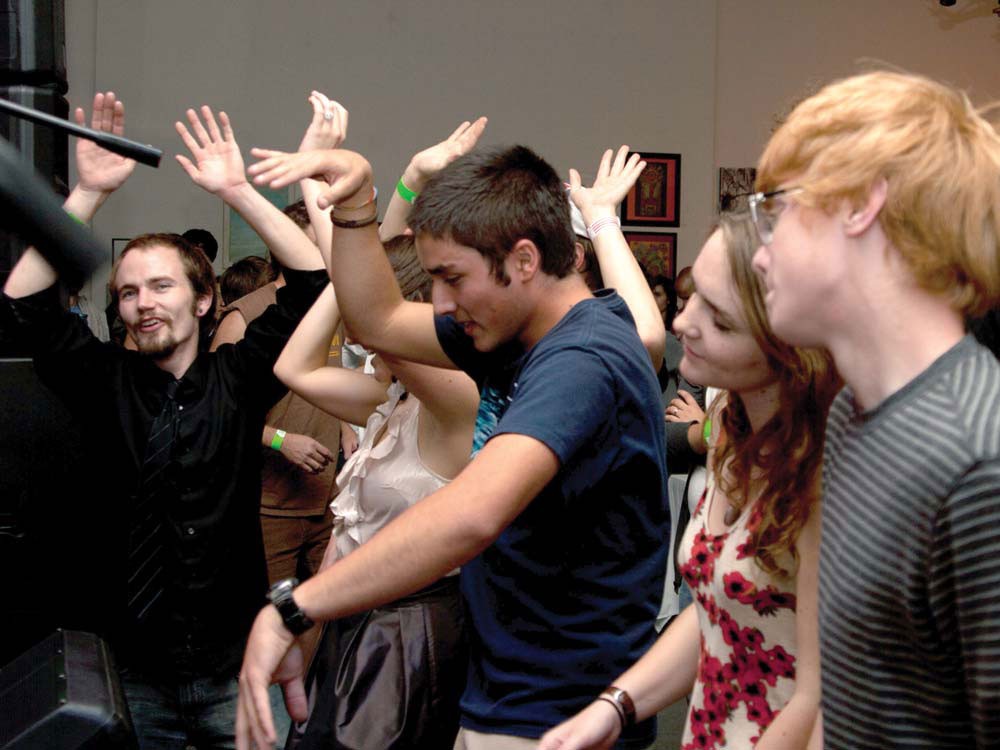 THE YEAR OF THE NONTRADITIONAL VENUE
While Spokane’s scene may fail in terms of space predictability (closing venues, moving venues), it sure as hell gets credit for constant effort and resourcefulness. Take for example the string of nontraditional venues: the third-annual Terrain in an empty storefront. The Museum of Arts & Culture’s BeGin!, a come-one, come-all afterwork event. The incredible art and music show at Spokane Boxing. The rooftop soirees at Isabella’s. They all prove that you don’t need acoustics, a dance floor or a stage. Live music can and should be experienced wherever there is a willing band and audience. (JB)

230 W. RIVERSIDE LIVES! THEN DIES!
Everyone always has high hopes when the historic music venue at 230 W. Riverside opens. We always do, at least. The former B-Side, Mothers, Smoke Shop, Zombie Room, yada-yada space reopened this year in early May as the Seaside, only to close down by October. Dammit. But it’s kind of OK this time around: Bill Powers, who was running the Seaside, transferred over to Aclub just a few blocks away. And since he’s been there, the Aclub calendar has been chock-full of punk rock, ska and hip-hop, both local and national. So we didn’t really lose a venue this time around — we exchanged it for a better one. Meanwhile, the 200 block of Riverside stays dark. (LS)

RAWK IN COMA
The Inland Northwest’s nonprofit concert and promotional organization is, for the first time in a decade, totally inactive in the local music scene. And there’s a good chance it might even be dead. RAWK president Dave Crume told the Inlander back in March that the organization lacks the funding and organizational direction needed for the upcoming year. “We’re going to take a break for a long while,” he said. “…Maybe we’ll decide to call it quits.” In the last 10 years, the organization has hosted the annual RAWK Final Four competition for local high school bands. Dale Strom, who was the brains behind the organization for years, says he’s moved on. Strom hosted Japandroids and Astronautalis in late 2010 under his new moniker, RSN Productions. And Crume didn’t return our calls or e-mails asking for an official death notice. (JB)

ALL-AGES TREAD WATER
All-ages venues constantly struggle for existence, but 2010 showed promising results. The Seaside kicked things off with a slew of concerts but quickly closed, with management heading over to Aclub — a spot that has far less all-ages shows.

The Cretin Hop hosted an impressive 250 all-ages shows this year, but closed its doors in mid-December to find a better location. Owner Tom “TC” Chavez told the Inlander in December that “it’s just a question of when and where. People don’t want to see us close down.” The all-ages crusaders at Empyrean proved the venue’s worth after moving to a new location with tons of support — but shows there are slowing down. All-ages venues may have stayed afloat in 2010, but the water got deeper. “It takes a lot to put on an all-ages show and it’s not easy to convince an owner it’s worth it,” says Patrick Kendrick of Platform Booking. “Basically, kids are usually just there for the music — which I love, but that doesn’t pay the bills.” (JB)

THE SWAMP AND SUNSET JUNCTION DUKE IT OUT
February marked a real shit-show over on the edge of Browne’s Addition. That was when a war began to rage between the Swamp Tavern and the Sunset Junction. It started when the Swamp pulled the plug on live music after pressure from its landlord — the owner of the Junction — to stop. In protest, bands cancelled shows at Sunset Junction (which had recently become a player in the local music scene with the addition of Platform Booking’s Patrick Kendrick as its booker) and Swamp fans started Facebook groups to show support of the tavern. Junction owner Joe Crosby admitted to the Inlander that he hired a private investigator to sniff out overcapacity issues at the Swamp in the months prior. Fire marshals got involved. A protest was planned. By July, Kendrick backed out of the Junction (“They were just the most difficult people I’ve ever had to work with,” he told Bloglander), and the Swamp started hosting live jazz and occasional DJs again. DRA-MA! (LS)

FUNK COMES BACK — FOR TWO NIGHTS
Showgoers old and young shat a collective brick when Black Happy — the Inland Northwest funk-rock band that made waves nationally during the heyday of grunge — announced a set of reunion shows in Spokane and Seattle. After a 15year hiatus, the eight-man outfit reassembled, selling out two shows at the Knitting Factory here and three at the Crocodile in Seattle. The band said the reunion was a one-time thing, but promised a DVD of memories from this year’s shows (which has yet to be released). And we’re still shocked by the outpouring of love and bitter hatred the reunion shows and our coverage sparked in our readers: Our story on Black Happy caused our web traffic to spike for weeks. So, hey — thanks, guys. (LS)

EMPYREAN MARCHES ON
While fire-sprinkler laws spelled death or serious injury to lots of local venues last year, Empyrean refused to go down because of them. The cornerstone of the all-ages music scene here put up a fight through late 2009, hosting benefit after benefit to try to install sprinklers at the space. They came up short. Way short. And even then they didn’t give up. Owner Chrisy Riddle and a team of loyal fans, patrons, bands and artists packed up every little scrap of Empyrean in boxes and moved it to the Big Dipper, just a few blocks away. And though there were a few scares over the summer — like the “closed until further notice” note on the door — the all-ages hub of all things music, art and poetry keeps on trudging on. We don’t know how you do it, Empyrean, but we’re sure glad you do. (LS)

FESTIVALS GOT HUGE
And it’s about damn time. Spokane was hurting for a large-scale festival and 2010 showed promising results. The Birds on a Wire festival in Pullman snowballed into a two-day indie/folk/roots festival that drew in upwards of 550 people. Organizer Larson Hicks told the Inlander in March he created the festival to give the Inland Northwest a chance to further legitimize its contributions to the Northwest sound. Round one — with acts like Rocky Votolato and Justin Townes Earle leading the way — was a success. Elkfest 2010 also got huge with more than 10,000 attendees over the three-day weekend of rock, folk, electronic and blues. Volunteers say the 71 hours of work, 64 empty kegs, 14 pairs of lost sunglasses, seven lost IDs, four lost cell phones, three lost flip-flops, two lost wallets and one minor head injury mean it was another smashing success. (JB)

LOCALS GO NATIONAL
Spokane musicians globe-trotted across the country (and, well ... globe) this year, paving the way for other ambitious local acts. Bands like Mon Cheri, James Pants and the Globes prove that the Inland Northwest is no black hole. Acts can play locally, travel — and even come back. Mon Cheri finished its first West Coast tour opening for national acts such as Jeremy Enigk, Secondhand Serenade and Jonah Smith. James Pants left and came back too many times to count. The Globes — who’d left Spokane for Seattle years back — moved back to town and got signed to Barsuk Records. Keep on truckin’, local musicians. (JB)

KNITTING FACTORY COMPETES WITH LOCALS
We hadn’t thought of it this way until Bill Powers explained to us why the Seaside was closing back in October. “When Empyrean first opened up and there was the old Blvd and a few other places … that was the right amount of venues for the [number of] bands in town,” he told Bloglander back in October. “I think it’s just a supply-and-demand thing. There’s too many venues for the amount of bands in town. And with the economy being bad, the Knitting Factory started doing two local shows a week — and that’s direct competition with me.” While a set on the Knit stage used to hold some kind of allure, this year most locals played on it — regardless of how many people attended. (LS)