Ten of the most important local stories to catch our eye

STOP IT, WE'RE BLUSHING
Remember that scene in The Shining where the elevators open and a wave of red blood slowly crashes down the hallway? Politically speaking, that was 2010.

Obama called it a “shellacking,” and it was as true here as in many other places in America. Simply put, the Republicans did well at the polls.

As for Spokane County government, its top elected officials are virtually now all members of the GOP. With the defeat of Commissioner Bonnie Mager, the board is now homogeneous — composed entirely of middle-aged white Republican men. (The last powerful Democrat left at the county level is Auditor Vicky Dalton.)

Idaho conservatives fared even better. Most notably, Blue Dog Democrat Walt Minnick, who surprisingly won a seat in the U.S. House of Representatives two years ago, was shown the door with a decisive loss to Raul Labrador. U.S. Sen. Mike Crapo, of the GOP, won with more than 70 percent of the vote.

And now, for the first time in decades, there is not one elected Democrat in Kootenai County. Redrum. (NICHOLAS DESHAIS)

GREAT RECESSION STILL GOING PRETTY GOOD
And for the third year in a row, the economy sucked.

The experts have told us that the Great Recession began in December 2007 and ended June 2009. But any real live human could tell you that the economy sputters along to this day.

Far into 2010, a majority of American workers have suffered unemployment, a reduction in work hours or a cut in pay, according to the Pew Research Center. As a consequence, we’ve become more frugal and are not putting as much toward preparing for the future.

In perhaps the best local economic news of the year, Sterling Savings Bank — one of “bailed-out” banks that had trouble getting its bearings — has recovered. In October, the bank announced $730 million in new capital, leading state and federal regulators to lift their cease-and-desist orders. (ND)

STATE BUDGET SHRINKS AND SHRINKS AND SHRINKS
Cut this! Cut that! Cut, cut, cut! That’s the word out of Olympia these days. In May, Gov. Chris Gregoire signed a spending plan that plugged the $2.8 billion budget hole. The plan cut deep into education, health and human services, but lawmakers still weren’t done.

Earlier this month, the Legislature and the governor approved a plan to cut the budget by an additional $590 million.

STREET CONSTRUCTION OR STREET DESTRUCTION?
One of the few upsides to the down economy this year was the city’s ability to push forward street renovation projects, taking advantage of low bids and federal stimulus cash. Coupling the latter with street-bond money, the city estimates it repaired 20 miles of roadways. It also striped in a few miles of bike facilities, including lanes and sharrows.

The work wasn’t all good news, though.

Construction transformed Second Avenue downtown into a war zone, snarling traffic throughout the summer and practically starving adjacent businesses. What’s more, discussion of putting bike lanes on Second while it was under construction turned into an email flame war between cycling advocates and City Councilman Bob Apple.

The worst part? City crews on Second were so slowed by unexpected underground infrastructure that they weren’t able to complete the project by the first snowfall. To the collective groan of downtown business owners, crews will have to dig up their temporary pave-job again in spring in order to finish. (JOEL SMITH)

M-M-M-M-MEGALOADS
It’s hard to hide something as tall as a three-story office building, but people who live or work along central Idaho’s wild and scenic Lochsa and Clearwater rivers only found out by accident that oil companies had plans to drive giant cargo loads through the wild and scenic.

ConocoPhillips and ExxonMobil, it turns out, have been working with the Idaho Transportation Department since 2007 about routing enormous pieces of refinery or tar-sands extraction gear from the Port of Lewiston over Lolo Pass into Montana. The route crosses the Bitterroots via Highway 12 and Lolo Pass, a federally designated National Scenic Byway.

But river resident and historical tour guide Lynwood Laughy says he and others only found out about the megaloads this year when his power went out. Driving into town to check on the problem, he encountered Avisita utilities crews raising the power lines to accommodate, they told him, giant cargo loads.

Laughy and others sued in August to stop the loads, setting up a legal fight that will continue into the new year and could have large consequences for the future, as other oil companies seek to use the same route.

ExxonMobil has proposed 207 megaloads, primarily pressure vessels manufactured in South Korea to extract bitumen from tar sands deposits in northern Alberta. The company has already barged 34 to Lewiston despite the lack of permits.

Though the oil companies seem confident they will be able to secure permits, the locals (10 more have recently joined the suit) have scored a victory to force the state to hold unprecedented public hearings on the process. (KEVIN TAYLOR)

NO CENTER FOR SPOKANE VALLEY
Put simply, the Spokane Valley’s Sprague-Appleway Revitalization Plan aimed to set up specific zoning requirements to transform the city into, well, a city. Over 30 years, it was supposed to revitalize the struggling Sprague Avenue, give Spokane Valley a recognizable downtown and, crucially, give the city a stronger identity.

And they kept their promise. The council — with strenuous objection from the council members Bill Gothmann and Rose Dempsey — passed an emergency ordinance to eliminate the restrictive city center zoning, and another ordinance to recommend the planning commission eliminate the SARP entirely. The majority of the council wants a return to zoning setups from 2007.

Former mayor Rich Munson, meanwhile, speculated that the new council — some of who have previously supported disincorporation petitions — was intentionally attempting to harm the Valley.

“I’m concerned that we’re looking at a concentrated effort to end the life of the city,” Munson said. (DANIEL WALTERS)

KENDALL YARDS UNDER CONSTRUCTION
In previous years, the Kendall Yards development — the 78 acres of land across the Spokane River west of Monroe Street — had gone from an exciting step in Spokane’s urban revitalization to a casualty of the recession.

But 2010 was the year it began to become an actual concrete-solid development.

Last year, Greenstone Homes bought the land from beleaguered developer Marshall Chesrown, whose idealistic 2005 vision for high-priced, high-density development seemed like madness by 2008. Greenstone’s Jim Frank, however, promised about half the density and much more economically diverse options.

Between Elm and Oak Street, 20 units have been built on Bridge Avenue — making up three townhomes and six single-family homes. Next year around this time, the impact should be even more dramatic, with 80 new homes and several new commercial buildings. (DW)

UNIVERSITY DISTRICT GROWING... ON PAPER
This time last year, a four-year medical school at the local WSU campus was a mere gleam in Spokane’s eye. A feasibility report had just been submitted. It was still only an idea.

But in 2010, getting an all-important fourth year of medical school training in Spokane became a top priority for local schools, as well as boosters like Greater Spokane Incorporated.

She adds the Spokane campus was officially designated the university’s health science wing in September, and that the school has secured designed funds for the first phase of a Biomedical and Health Sciences building (though crucial construction funding was left out of Gov. Christine Gregoire’s budget for the next two years).

But the medical school hasn’t been the only project buzzing around the U-District. A series of interlocking planning processes in the area has already begun, anticipating the future medical school.

One group of designers and volunteers has been assessing options for a downtown circulator that could potentially move people between the U-District, the medical district, Kendall Yards and downtown.

East of there, another group has produced two designs for a bridge that would jump the railroad tracks, connecting the spine of the WSU campus to the East Sprague neighborhood, which business owners have begun to spruce up (calling it the “International District”), partially in hopes of housing medical students. (JS)

TAKING THE INITIATIVE
The red wave of Republican victory was the most watched phenomenon in Washington’s elections this year, but the number and variety of initiatives and other measures on the ballot proved a worthy sideshow.

The state’s voters faced nine separate measures, including six initiatives, a referendum and some measure types many voters had never even heard of.

But despite the measures’ abundance and complexity, the message from voters was fairly uniform. Any proposal that smelled anything like a tax hike was roundly rejected, including Bill Gates Sr.’s high-earners income tax.

Voters also tossed out a new tax on candy, soda and other food items, and rejected a measure that would have funded energy-efficient construction projects in public schools.

The only measures that didn’t break along clear Republican lines were a “no” vote on privatizing disability insurance, the approval of a measure allowing legislators to calculate the state’s debt differently and two initiatives that would’ve privatized the sale of liquor (among other changes). Despite their pro-privatization angles, voters rejected both liquor measures after a campaign full of worries about their social ramifications and effects on the state’s budget. (JS)

SIX SHOT, FOUR DEAD
Perhaps no story was bigger in 2010 than the series of officer-involved shootings that left four citizens dead, beginning with Wayne Scott Creach, who was shot by a deputy in Spokane Valley on Aug. 25. Read more about our coverage here. (JACOB H. FRIES) 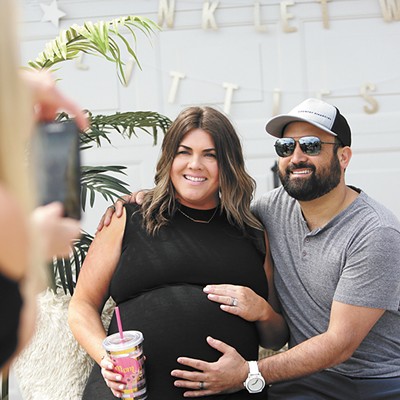