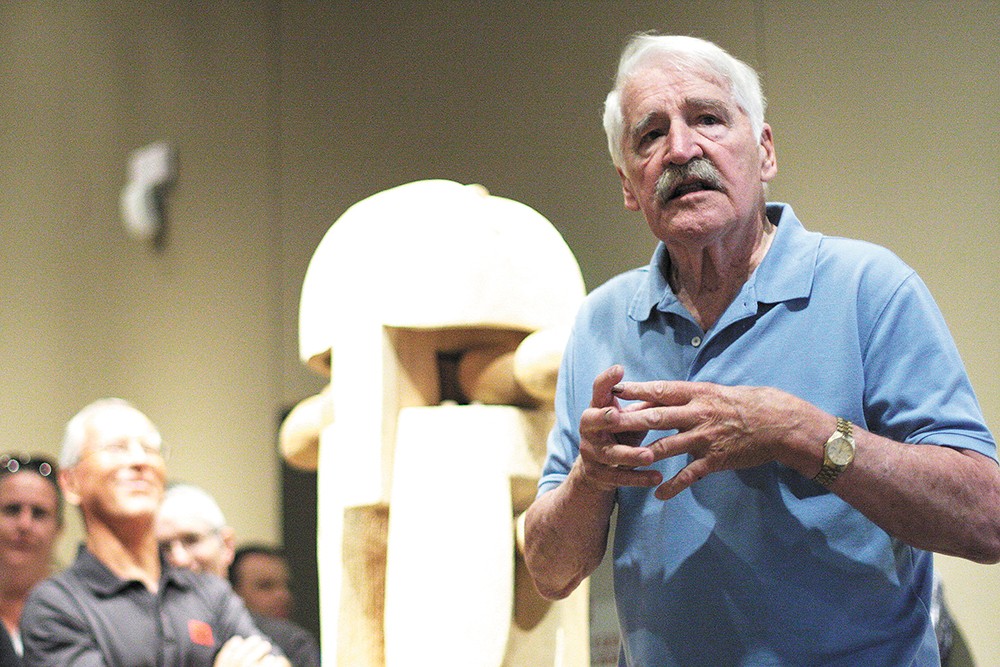 Young Kwak
Harold Balazs was the subject of an Inlander profile in 1995.

BATMAN FOREVER gave us "less plot and more feelings," TOY STORY warmed even the most hardened hearts and BRAVEHEART won Best Picture. (The Inlander gave the film mixed reviews.) O.J. SIMPSON was acquitted, MICHAEL JORDAN came out of retirement (and went on to win three more consecutive NBA Finals championships) and Billboard Magazine's No. 1 single in '95 was "Gangsta's Paradise" by Coolio.

THE INTERNET IS A THING

In September 1995, the Spokane Symphony celebrated its 50th season opener. Our coverage looked back on the previous seasons, musicians and conductors, including the first performance of what was then called the SPOKANE PHILHARMONIC in the Masonic Temple in 1945. Evelyn Ayer, a violinist who joined the orchestra in 1946 until her retirement in 1984, said she hadn't even considered getting paid to play. "We were just so thrilled it was happening in Spokane," she said.

The arts scene was poppin' back in '95. Our preview featured upcoming performances by Boyz II Men, Merle Haggard and Al Stewart and "neo-hippies PHISH" (whose show in October sold out). The season also featured the Ringling Bros. and Barnum & Bailey Circus, several nights of JOSEPH AND THE AMAZING TECHNICOLOR DREAMCOAT, the Hip Cats Blues Festival and Dracula, the ballet.

In a sprawling expose on one of Spokane's funkiest neighborhoods, we talked to RAIN WOLF, who was living in a U-Haul trailer while her Peaceful Valley home was being restored. We profiled EWU professor JOHN BUCHANAN, aka the "Indiana Jones of the Inland Northwest," who hacked through jungles and climbed through caves in Central America in search of a Mayan burial room. We heard from SONJA ANDERSON, packing a Colt .38, who was convinced her phone call with the Inlander was bugged by the government and was one of the women who lived near the Hanford Nuclear Reservation. Eight years prior, the government admitted radiation had leaked into the air, water and soil, and Anderson was trying to get it shut down. Finally, we profiled the HAROLD BALAZS, in the May 31 issue, who had been creating art for nearly half a century at that point and had no intention of stopping.

The original print version of this article was headlined "THE YEAR THAT WAS... 1995"