One big 1997 cover story, "PRESUMED GUILTY?," took a look at the strained relationships between the Spokane Police Department and the black community. Local civil rights activists argued that the police frequently pulled over black motorists, with NAACP attorney CARL MAXEY arguing that when cops enter the force, their racism "is allowed to grow and fester rather than be purged." The cops, meanwhile, said they were getting a bad rap. 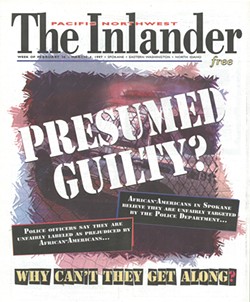 Long before the days when local author Jess Walter's work was leading ads for Audible.com, the INLANDER LITERARY SUPPLEMENT dug into the work of the literary stars of the region. The 1997 special section headlined the issue with the work of Idaho legend PATRICK McMANUS, the recently deceased humorist who penned hilarious somewhat-exaggerated tales of growing up in the Inland Northwest outdoors surrounded by characters like cantankerous old coot "Rancid Crabtree."

The Inlander recently published pieces on how Twitter warps the attention span and how Facebook is destroying the journalism industry — but our technophobia was also flourishing back in 1997, as we wrestled with the perils of COMPUTER ADDICTION and the dangers of email.

The Inlander continued to play the role of the Cassandra, warning in vain about the perils of the River Park Square parking garage deal.

And yes, one cover did feature a big photo of a wildly grinning CARROT TOP directly beside a picture of MEGAN KANKA, a 7-year-old who had been murdered by a sex offender.

We aggressively profiled 5th District Representative GEORGE NETHERCUTT, grilling him on his term limits promise and asking whether he had lost touch with the values of his district.

We dug into the case of DONALD HUTCHINGS, a Spokane resident who was captured by terrorists in Kashmir, India. It doesn't have a happy ending.

And finally, we celebrated local computer wunderkins RAND AND ROBYN MILLER, creators of the megahit Myst, upon the release of their second game, Riven.

The original print version of this article was headlined "THE YEAR THAT WAS... 1997"