It's the year that TWITTER was created, the year that Google purchased YOUTUBE for $1.65 billion after having launched only a year before, and it's when MILEY CYRUS debuted in Disney's Hannah Montana. The Flaming Lips, Queens of the Stone Age, the Decemberists and the Shins all played at the SASQUATCH! MUSIC FESTIVAL. And JADA PINKETT SMITH and her heavy metal band, WICKED WISDOM, played Spokane in February. Staffer Luke Baumgarten wrote of Pinkett Smith: "Angry, indignant, foul-mouthed metallista with a soft spot for murdered children and a penchant for offsetting her smooth, sultry TLC croon with deep metal growls and the occasional De-La-Rocha-esque hip-hop cadence."

A nine-part television series on the KOOTENAI COUNTY TASK FORCE ON HUMAN RELATIONS and its role in dismantling the Aryan Nations' compound in North Idaho aired in January. The task force remains intact today, with co-founder Tony Stewart still involved. Their work is as important as ever (see page 20).

Otto Zehm, a mentally disabled janitor, was beaten, hog-tied and shocked with a Taser by Spokane police in a Zip Trip. He later died in the hospital. The incident and subsequent cover-up have plagued the department for years. Officer Karl Thompson, who was the first to confront Zehm, served time in federal prison for lying to investigators. 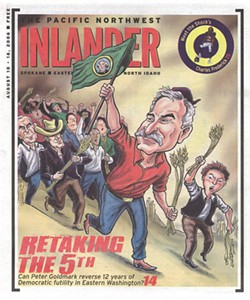 'I WAS AN ILLEGAL IMMIGRANT'

So writes Nicholas K. Geranios, a correspondent for the Associated Press. Geranios' family came to the U.S. as tourists and just decided to stay, evading attempts by the U.S. government to deport them until a U.S. senator intervened.

But the major point of Geranios' piece in the May 4 issue is what he believed was lost in the discussion about immigrants: the people.

"Call them risk takers, entrepreneurs, eternal optimists. The point is, they are the people any society — but especially our diverse, capitalistic society — needs the most," Geranios wrote.

We met JOHN PHILLIPS, the NASA astronaut who sent us photos of the Inland Northwest from the International Space Station. We were introduced to RACHEL CORRIE, the Washington state resident and activist who was crushed to death in Gaza under a bulldozer operated by the Israeli army, and the subject of a play My Name is Rachel Corrie, based on her diary and emails. We also met JIM BATTELL, the local "dumpster artist," who painted on cardboard fished from the trash.

The original print version of this article was headlined "THE YEAR THAT WAS... 2006"