Michael Roos with his wife Katherine

It's the start of a decade that will likely be known as the time when social media turned bad, Donald Trump turned president and the economy turned good. But in 2010, the economy is still struggling to recover, Barack Obama is fighting to pass OBAMACARE and Republicans are winning the midterms in a red wave. Also this year, the BP OIL SPILL leaks into in the Gulf of Mexico and a massive earthquake devastates Haiti. But it's not all negative: TOY STORY 3 warmed everyone's hearts.

In September 2010, reporter Nick Deshais surveyed the border of Spokane over the course of four days, traveling 70 miles by foot, bike and boat. When it was over, he wrote an insightful piece on the history and growth of Spokane, describing it like a tree he saw that had grown over a rock: "Rather than move the rock, or destroy the rock, the tree swallowed it whole and made it a part of itself. In the last 130 years, Spokane has done something similar."

Between Washington State University, University of Idaho and other local colleges — the Inland Northwest is home to plenty of researchers and experts in their field. And they always have something to teach us. That's why the Inlander decided to feature research from local schools in its annual "SCHOLASTIC FANTASTIC" issue. In 2010, we wrote about how understanding vaginas can improve women's health and how shrimp can change modern warfare, plus other unique insights. 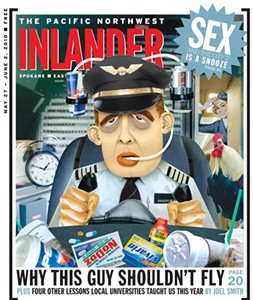 The May 27, 2010, issue; cover illustration by Jeff Drew
We wrote about JOE PEIRONE, grandfather to Inlander publisher Ted McGregor and general manager Jeremy McGregor. Ted details how Joe and his wife Alice turned a family truck into Peirone Produce. We also spoke to CATHY McMORRIS RODGERS about why Republicans were stonewalling President Obama. And we featured MICHAEL ROOS, the former NFL and EWU football player who EWU's red Roos Field is named after.

In 2010, the Inlander publishes five cover stories as part of an "INJUSTICE PROJECT," which covered how the Spokane Police investigates its own officers for excessive force, how three people were put in prison for crimes they didn't commit and how being a felon puts people in a hole they can't climb out of. Meanwhile, there's a spate of deadly police shootings in the area and the final story from the "Injustice Project" in 2010 examines the growing tensions between citizens and cops. ♦

The original print version of this article was headlined "THE YEAR THAT WAS... 2010"

"Fake News" is an unfounded charge; but American media does need to cut the euphemisms