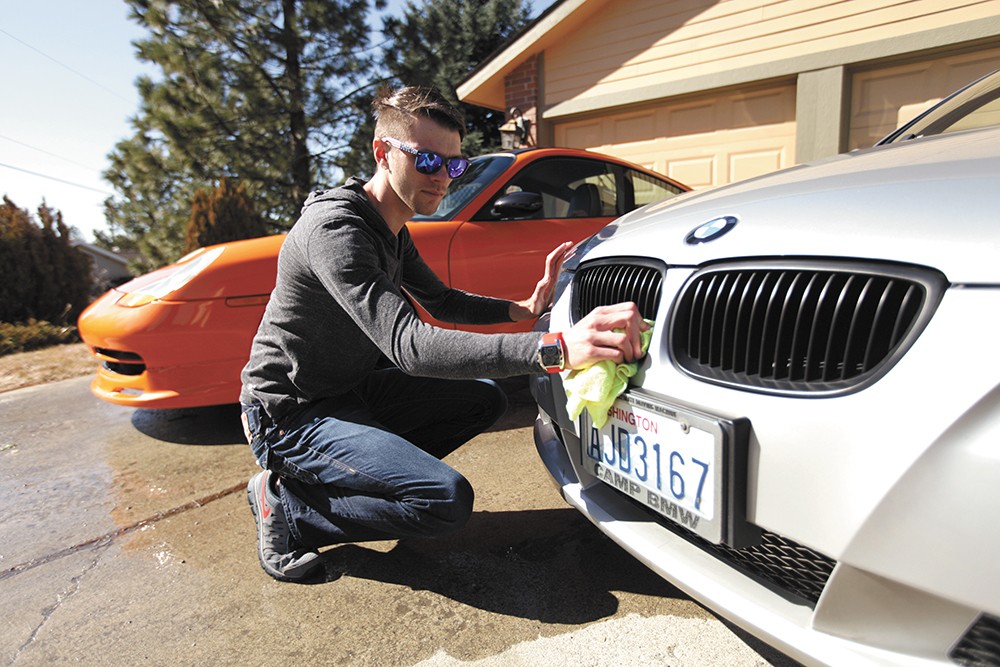 He's never had health insurance in his life. So why start now?

Insurance is expensive. Newell is a self-supporting student at Spokane Falls Community College with bills to pay. When he's not in class, he runs a small detailing business — specializing in slick European sports cars and private planes — where his overhead is high.

"I realize things can happen. For all I know, six months from now I could get diagnosed with cancer or something that could be very expensive," Newell says. "I'd take the risk of something happening and dealing with it as it comes, [rather] than pay for insurance and wonder how I'm going to afford tuition this quarter."

Newell is among the so-called "young invincibles": Healthy, disease-free 18-to-34-year-olds who require little medical care and don't see themselves needing any in the near future.

The Obama administration is depending on these young adults to come to state insurance exchanges in droves. Their participation in the health insurance exchange is vital to make the Affordable Care Act work. When young invincibles purchase health insurance, they help keep premiums down for everyone by offsetting the costs of insuring older, sicker Americans. The more young people like Newell decide to opt out and pay the penalty — just $96 this year — the higher premiums will rise.

"It's not that they think they're not going to die," says DJ Wilson, president of Wilson Strategic Communications, a health care consulting firm based in Lynnwood, Wash. "They typically haven't experienced anything in the way of major health trauma, so they don't know how costly this stuff can be. You only really care about health care when your body starts to break or a family member becomes ill."

In an effort to reach out to more young, healthy adults, the Washington Health Benefit Exchange has launched partnerships with the state's major ice hockey teams and eight roller derby leagues.

The exchange also is spending $2.6 million on its latest advertising campaign to persuade young invincibles to buy health insurance before the March 31 deadline. Its latest push includes two new television spots featuring a fictitious pair of flashy rappers interviewing real Washington residents who signed up for health insurance — with brief interludes of them singing, dancing and beatboxing about pre-existing conditions, medical debt and "40 CCs of low-cost options."

Michael Marchand, spokesman for the exchange, compares the new ads to "Napoleon Dynamite or Anchorman-like movies." According to Marchand, they're working. Within the first week of the ads' debut, Marchand says the exchange witnessed an 8 to 10 percent bump in applications started and completed on the Washington Healthplanfinder website from people under 35.

"The people we're trying to reach with these ads ... frankly don't think they need health insurance until an accident or illness occurs," Marchand says. "The purpose of the ads is to cut through the clutter and grab the attention of the audience, and that's exactly what these ads are doing."

Nationally, more than 27 percent of young adults are uninsured, according to the Kaiser Family Foundation — a higher rate than other age groups. That's not because they don't want or think they need health insurance. According to a Kaiser survey, three in four 18-to-30-year-olds agree that having insurance is very important. The problem with getting health insurance, Wilson says, is the cost, despite the fact that the majority of young adults qualify for low- or no-cost insurance on the exchange. In Washington, nearly 100,000 18-to-34-year-olds have enrolled in Medicaid.

"A lot of young people are making money for the first time in their lives, and most people don't even buy insurance until after they have children," Wilson says. "If you're single and carefree and 28, and just having fun with life, as well you should be, then there's not a lot of impetus to sign up."

For Stephanie French, insurance is a luxury she simply can't afford. French is 31. She hasn't had health insurance since 2011 and won't anytime soon, despite her fears of falling seriously ill.

"I'm scared to death about breast cancer because that does run strongly in my family," she says. "And I do have a pre-existing weak heart."

She lives in West Central with her husband, two children and her husband's brother, who has Asperger's syndrome. French is the only member of her household who isn't insured. Her kids are covered by Washington's Children's Health Insurance Program. Her husband gets insurance through his job. Her husband's brother has disability. French, who has worked as a towing dispatcher for the past 14 years, was offered insurance by her employer, but opted out rather than take the pay hit: Health coverage would have cost her $180 a month, roughly a third of her grocery budget.

"We don't get any assistance with housing or bills or food or anything else. We literally live with what we earn," French says. "Having insurance that's there just as a just-in-case is not going to put food in my kids' bellies." ♦