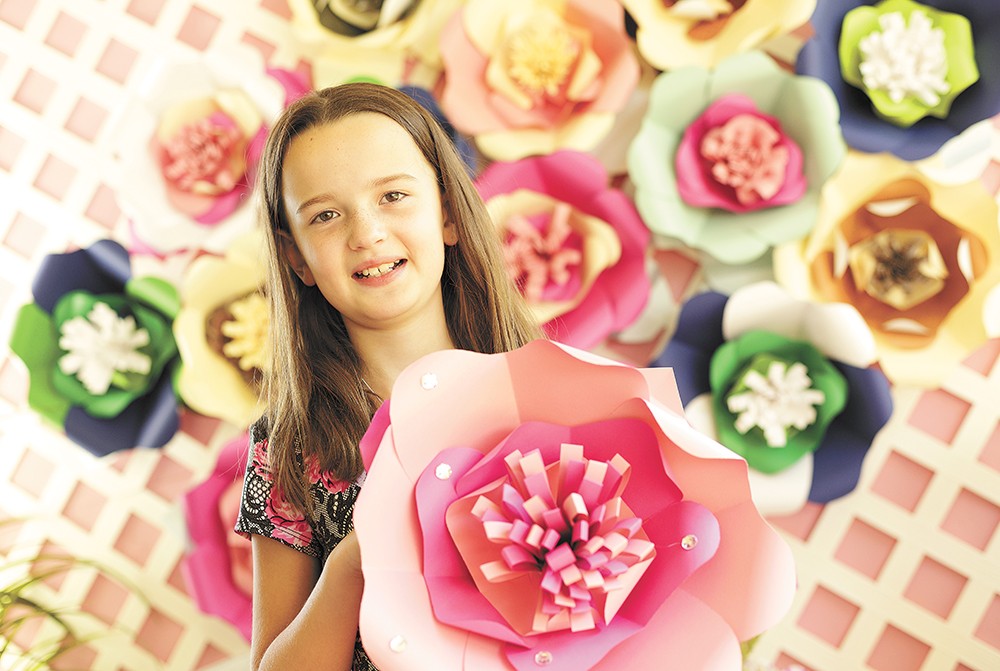 Young Kwak
Keira Larson, 9, with paper flowers that she and her family make and sell; proceeds support local animal shelters.

It all started with lightning.

Scooter bolted from the Larson family's yard in terror during a storm earlier this summer. Fortunately, a good Samaritan found the little coal-colored Shih Tzu and brought him to Spokane County Animal Protection Services (SCRAPS) animal shelter. When his family found him there two days later, the Larsons decided to add a sixth member: Nilla, a two-year-old Shih Tzu also at the shelter. While the youngest Larsons, Keira, 9, and Joëlle, 12, were overjoyed that their parents said yes to a second dog, Keira was left with a more somber impression of the animal shelter visit.

A few days later, while making paper flowers to brighten her grandmother's hospital room, Keira suddenly burst out to her mom, Amy, that they should make and sell flowers to help pets in shelters. They'd call the project Petals for Pets.

"We got our dog from the pound, and so we thought we could save more dogs," Keira says.

In the six weeks since, Petals for Pets has blossomed into something bigger than Keira or her family ever imagined.

Keira, with the help of her mom and sister, has now made and sold dozens of oversized paper flowers for a minimum donation of $15 apiece. Selling the handmade sculptures mainly through the Petals for Pets Facebook page (they've shipped flowers to as far away as Kentucky and Massachusetts) and to friends and family, the girls presented a $380 donation to the Spokane Humane Society on Aug. 12. They also left paper flowers for the future adopter of a diabetic dog and a longtime resident cat at the shelter. Keira wants Petals for Pets' next donation to go to SCRAPS, where they adopted Nilla.

"For SCRAPS, I don't want them to put [the animals] down, and I really want them to get more cages and food for them," she says.

Julia McIntyre was a young child

when her beloved Uncle Ben passed away, on Dec. 22, 2009. Now, almost six years later, at age 12, Julia recalls a favorite memory of him: when he signed "I love you" to her at her grandparents' house. Ben was born completely deaf, and mostly blind. Later, in an accident, he became paralyzed from the chest down.

"It was hard for me to see him in a wheelchair," she says. "But there were a lot of good memories. We'd always eat sausage together because that was one of his favorite foods."

For an annual social justice project at Julia's school, St. Aloysius Gonzaga Catholic School, she began collecting donations for the Spokane Guilds' School, which Ben attended, starting in first grade. In the six years since, Julia estimates she's helped raise $8,000, starting out with the modest goal of raising $100 that first year. She's already far above her personal fundraising goal that increases by $100 each year. Julia raised $5,000 for the Guilds' School this year, thanks to donations from friends, family and matching grants from local businesses like STCU and Rosauers. While the school project is held during the 40 days of Lent, Julia's efforts — referred to as Julia's Penny Drive, tying into the Guilds' School's annual event — continue year-round. Now a seasoned young philanthropist, Julia has advice for fellow aspirants: Don't let age stop you.

"Everyone says you have to be a certain age to do this, and you really don't. You could be 75 or 5, and you could do the exact same thing that anybody else could do if you set your mind to it, and have a great heart and be very compassionate to others," she says. "Eventually it pays back, and I'm finding that out."

On a balmy Monday morning

, kids of all ages are zipping around the grounds of the West Central Episcopal Mission — the rendezvous point of Project Hope Spokane — wearing identical navy blue T-shirts, some smudged with dirt and some faded from so many washings. It's evidence of a long summer of hard work in the sun, mowing lawns for the West Central nonprofit's yard care service, pulling weeds in the garden plots spread through the neighborhood and selling their bounty at area farmers markets. This summer's 10-week job training program for neighborhood kids between 11 and 18 years old will soon wrap up, and today the crew leaders are hosting mock job interviews before the kids head home at noon.

While Project Hope's participants must apply to the program and receive a stipend ($500 to $1,400) based on summers served, they're still giving back to the impoverished West Central community in an impactful way. Likewise, the skills and relationships Project Hope's participants develop translate into success in the classroom, professional settings and personal development.

"Honestly, it keeps you out of trouble," remarks Monicea Brown, 14, who became involved four years ago because she saw her older siblings and cousins earning a stipend for their work. "It teaches you responsibility," she says, adding that she likes working in the garden as much as mowing lawns for her neighbors.

"If we didn't have Project Hope, our neighborhood would be so nasty. It has been for a lot of years, but since it's been here it just gets better, and the gardens are amazing. When we get donated new lots, it's always fun to restart and design it."

Many other participants, like Klonnie Showalter, 12, also were inspired to apply to Project Hope because of older siblings. After his first summer last year, Showalter started offering his own services shoveling snow from sidewalks and mowing lawns around the neighborhood. He says he'll work for free to help out senior citizens and anyone who's disabled.

"[Project Hope] inspires people to look up instead of down," he says, "and they excel further, and like me, it teaches a lot of work ethic." ♦