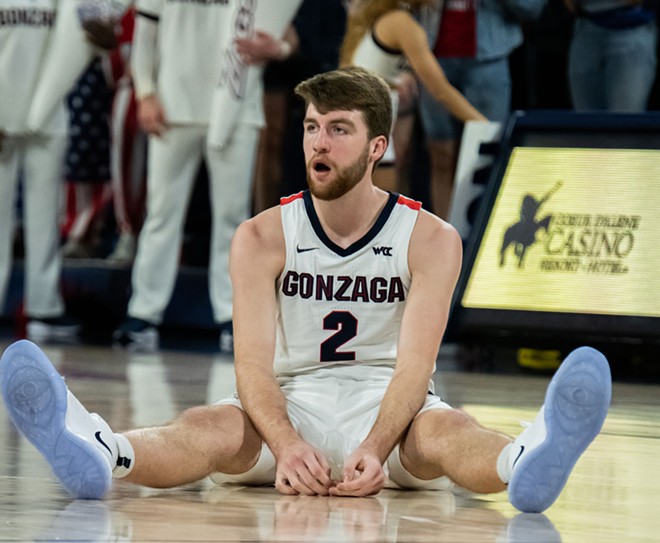 In the preseason, it’s wise to remain calm. You don’t want to overreact and put pressure on young players. But now, two games in, it’s okay. Small sample size be damned; the Gonzaga Bulldogs and their underclassmen look really, really good.

Drew Timme and Jalen Suggs are the real deal. They proved that less than two games into the season.

We all knew about Timme. He’s a sophomore, which makes him kind of old by modern college basketball standards. A season ago the big man from Texas averaged 9.8 points and 5.4 rebounds per game. Two games into his sophomore season, against an elite Kansas program, ranked No. 6 in the country, and an Auburn Tigers squad coming out of the SEC, he’s averaging 26.5 points and 8 rebounds per game.

Those are first team all-America numbers.

Last season Timme came off the bench behind Filip Petrusev, a third-team all-American according to the AP, among others. This season, so far he looks like the best big man in the country. He set a career high with 25 points against Kansas, and then broke it with 28 against Auburn.

Again, small sample size. It’s just two games; you don’t want to put too much pressure on the kid. But, dang, he’s done this against a top-ten team in Kansas and an Auburn squad that made the Final Four the last time we had a Final Four. Small sample size be damned, these numbers seem real.

Timme is a sophomore. He’s played a year in the Gonzaga system. It’s almost expected. Jalen Suggs, though? That kid is a true freshman.

Doesn’t seem to matter. Suggs is averaging 18 points, 4 rebounds and 7 assists through two games. Gonzaga threw him into the fire against Kansas and Auburn and he’s done more than hold his own. According to stat whiz Ken Pomeroy, Timme is the sixth best player in college basketball this season. But Suggs? He’s the second best. As a freshman, he’s the second best player in the sport. Talk about an embarrassment of riches.

There has been no waiting period for Suggs. He has stepped in and stepped right up. He was ready to go the moment the ball was tipped on opening day.

Through two games, it’s not hyperbolic to say the Zags have the two best players in all of college basketball. Here in Spokane, we’ve long been accustomed to watching great teams. But they’ve never come together this quickly. And for a squad that has a decent amount of veteran talent, to be led by underclassmen like they are right now? The rest of college basketball should be taking notice.

Right now, Gonzaga looks like the best team in the country. Without question, if we’re being honest. And all it took for them was underclassmen. They’ve got plenty of talent at the upperclassman level, but so far it’s the newcomers who are delivering the promise of being the best Gonzaga team of all time.

NEXT UP
A showdown with West Virginia at Wednesday at 4 pm (ESPN), followed with a huge game against Baylor, picked to win the Big 12, Saturday at 10 am (CBS).