Just before Thursday’s game against Santa Clara, Gonzaga announced that freshman forward Anton Watson would miss the remainder of the season as he undergoes surgery on his shoulder. Watson had been in and out of the lineup all year long as he dealt with recurring dislocations. 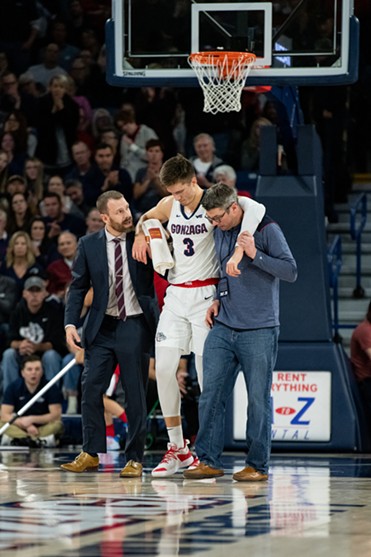 Erick Doxey photo
Filip Petruseve is helped off the court.
In the second half against BYU on Saturday, the Kennel fell silent as Filip Petrusev lay on the floor, holding his leg in pain. Petrusev was helped off the floor and spent the remainder of the game receiving treatment in the locker room for an ankle sprain.

When Watson was ruled out, Mark Few opted not to replace him. Gonzaga’s eight-man rotation shrunk to seven. When Petrusev left, it shrunk to six. With 1:30 left to play and a 21 point lead, the Zags had four starters on the floor. The only starter absent was the injured Petrusev.

Gonzaga is always loaded with talented players, but in recent years coach Few has left some of them on the bench. The Zags have employed a short rotation and found great success with it.

Last year when backup point guard Geno Crandall missed eight games with a broken hand, Greg Foster and Joel Ayayi saw a slight uptick in minutes. But neither really managed to break into the rotation to replace Crandall. It’s not like they weren’t good enough, either. Just look at what Ayayi has done this season.

This leads one to believe that’s what will happen as Gonzaga battles through injuries this time around.

According to 247Sports, Martynas Arlauskas was rated as a three-star prospect coming out of high school and Pavel Zakharov was a four-star prospect. They’re very capable of playing productive minutes in place of Watson and Petrusev, but they aren’t playing.

Instead, Killian Tillie and Drew Timme will have to play more. Corey Kispert, who is described by Gonzaga in his official bio as someone who brings strength to the backcourt, is now playing regular minutes at power forward. And hey, it’s working.

Gonzaga trounced Santa Clara by 50 points and took down BYU by 23.

It’s worked in the past, too. The last time Gonzaga was this thin was the 2015-16 season after Przemek Karnowski suffered a season-ending injury. Ryan Edwards initially stepped up, but his minutes dwindled as the season wore on.

Come March that season, the rotation was set at six. The only player getting real minutes off the bench was Silas Melson, a guard. Despite that, the Zags made it to the Sweet Sixteen. They got there by winning two games in the tiring altitude of Denver.

That’s the case for Gonzaga once again. Assuming Timme replaces Petrusev in the starting lineup, the only player getting real minutes off the bench will be Admon Gilder, a guard. They’re forced to play small, just like they were then.

The Zags first-choice rotation this season included eight guys. Until Petrusev returns from his ankle injury, it will be down to six. It’s not ideal, but Gonzaga’s made it work before and they’re making it work again.