Young Kwak photo
The Zags after their Halloween exhibition game: A lot of new faces, but the same uniform of excellence.

Forget rebuilding and reloading. Those words don't apply to the Gonzaga Bulldogs anymore. The Zags are firmly in a wash, rinse and repeat cycle these days.

In case you've forgotten, Gonzaga's men's team spent the entirety of last season ranked No. 1 in the AP Top 25. They won 31 consecutive games to start the season, lost just once all year, and found themselves playing in the national championship game. The team's accomplishments were in no small part thanks to an incredibly talented roster, which subsequently sent three of its best players to the NBA.

Last season's Zags were one of the best statistical teams in college basketball history. It would be hard for any program to replicate that in back-to-back seasons, especially a program that lost as much talent as Gonzaga did this offseason.

Yet that's exactly what this year's crop of Bulldogs are expected to do. For the second season in a row, Gonzaga is ranked No. 1 in the preseason AP Top 25. The prognosticators picked them, once again, to be the best team in the sport.

Only two starters return from last year's team, but they're about as good of a duo as you could ask for. Senior point guard Andrew Nembhard was second on the team in assists with 4.4 per game and fifth in scoring with 9.6 points per game a season ago. Expect those numbers to go up, especially in the assist column, with Jalen Suggs no longer sharing time with Nembhard in the backcourt.

Nembhard's the senior, but junior forward Drew Timme is the face of the team. After leading the team in points and rebounds with 19 and seven per game last season, Timme was named a consensus second-team All-American. This year, he's a preseason first-team All-American who is raking in just about every preseason player-of-the-year honor out there.

Those two upperclassmen bring not only talent to the team but leadership as well.

"You've got this great mixture of Drew's confidence and bravado and Andrew's great example-setting that our young players can both lean on," says Assistant Coach Stephen Gentry.

"You do have a very vocal, outspoken player in Drew. Our young guys really rely on Drew's swagger and confidence. For a young player that's very calming. Andrew's admittedly much more quiet and much more soft spoken, but an incredible leader in how to do it by example. How Andrew approaches the game, and how professional he is about his approach, and how diligent and detailed he is with his preparation, it blends together really well."

The team will need that leadership because, relative to years past, there's a dearth of Zag veterans on this year's roster. Outside of Timme and Nembhard, the only rotation player with more than a year of experience on the roster is junior forward Anton Watson. And his career has been up and down due to injuries.

"That's always been the thing about Gonzaga," Gentry says. "The torch has always passed, so to speak, from team to team in terms of the standard that we play at. And even individually, so much of that is addressed in recruiting. By recruiting very talented players and having a plan in place knowing who you're going to be losing and knowing that you have a next man up."

Those next men up this season were high school players last season. For what it's worth, though, they were really good high school players. According to 247Sports, a college recruiting news service owned by CBS Sports, Gonzaga has the third-best incoming class in the country. Among Gonzaga classes of years past, this season's is the best in program history. The first-, third-, fifth- and ninth-highest-rated prospects to enroll at Gonzaga, ever, enrolled for this season. They join Timme and Watson, seventh- and eighth-highest rated in program history, on the roster. Altogether, five of Gonzaga's 10 highest-rated prospects, ever, are on the roster at the same time.

Leading that group is Chet Holmgren, the No. 1-ranked player in his class and former high school teammate of last year's stud freshman, Jalen Suggs. The lanky seven-footer is often called a unicorn for his inimitable style of play. He's tall and long, but super thin. He can protect the rim like a dominant center or dribble into a silky smooth stroke from long range like a guard. He's the ultimate matchup nightmare.

Then there's Hunter Sallis, a fellow five-star recruit, who will be the latest in Gonzaga's long line of big guards. The 6-foot-5 combo guard showed off his athleticism and emphatically won the dunk contest at Kraziness in the Kennel, the Zags' preseason fan festival. Alongside Sallis in the backcourt is four-star point guard Nolan Hickman from the Seattle area. The freshman was initially committed to play for Kentucky, a powerhouse of the sport, but changed his mind in favor of the Zags earlier this year.

The Zags used to avoid recruiting prospects with interest from power conference teams. Now they're snatching players away from the blue-blooded goliaths of the game.

A pair of bigs from the Portland area, Ben Gregg — a familiar name to fans, as Gregg graduated from high school early and joined the team midway through last season — and Battle Ground's Kaden Perry round out this highly touted freshman class.

Those two bolster an already strong, massive and versatile Gonzaga frontcourt with Timme, Holmgren and Watson.

"They all bring something a little different in their individual skill-sets, but they all play so well off of each other and within the flow of our offense," Gentry says. "It gives us some versatility in how we want to play on both ends of the court, and also depending on who we're playing we might have to react to the style of the team we're playing and counterpunch that."

Stuck in between the guards and the bigs is sophomore wing Julian Strawther, who looks poised for a breakout year. Stuck behind a logjam of talent on the wings, Strawther averaged just 7.4 minutes over 25 games played last season. In his first action as a sophomore, in the scrimmage at Kraziness in the Kennel, Strawther led all scorers.

"He had a great year of development, kind of in the shadows. He learned a lot from Corey and Joel about how to play that position. He got some decent reps in games but more great reps in practice," Gentry says of Strawther.

The Zags will need the young players like Strawther and all the freshmen to step up from the jump, as yet again the program has put together a murderers' row of a nonconference schedule.

Gonzaga's season opener comes Nov. 9 at home against Dixie State, a team that got blown out 112-67 by the Zags last year. Despite the lowly opponent, the game will be notable because of one man's absence. Head Coach Mark Few was charged with and subsequently pleaded guilty to DUI during the offseason. As a result, the university has suspended him for three games to start the season. Frankly speaking, he's suspended for one game, against Dixie State, and two preseason exhibitions against Eastern Oregon and Lewis-Clark State that don't count in any meaningful way, regardless.

Few's suspension ends just in time for his team to run the gauntlet. Fifth-ranked Texas will visit The Kennel on Nov. 13, as what should be the highest-ranked team to play at Gonzaga in program history.

From there, it's second-ranked UCLA in a Final Four rematch on Nov. 23 in Las Vegas. Then, three days later, ninth-ranked Duke down in Vegas as well. Alabama, ranked 14th, travels to Seattle to face the Zags on Dec. 4. On Dec. 18 in Phoenix, the Zags face off with Texas Tech, which was unranked but received votes in the preseason AP Poll.

Conference rival BYU also received votes in the preseason AP Poll, and they won't be the only roadblock on the Zags' annual run through the West Coast Conference. The Zags will be as strong as ever this season, but the conference as a whole should be even stronger than usual.

Statistician Ken Pomeroy, whose metrics are used by the NCAA to help select and seed teams for the 68-team NCAA Tournament, projects four WCC teams to be top 40 nationally. San Francisco, Saint Mary's and BYU are all in the mix to make the big dance, as is Loyola Marymount. The Lions landed at No. 69 in Pomeroy's preseason rankings, which means if his metrics alone were used to determine the 68-team field, they'd be the first team left out.

The West Coast Conference has never had more than three teams make the NCAA Tournament in a single season. This year, that number is expected rather than aspirational.

Still, despite all the challenges on the schedule and turnover on the roster, the expectation remains sky-high for the Zags. As high as ever, even.

"I feel like we're the best team in the country, and I'm going to stand by that for as long as I live," Timme said after the team's scrimmage last month. "I have no wavering confidence in that regard."

Before the scrimmage, before a packed house of fans for the first time since March 2020, Timme offered a similar, but a more direct message. 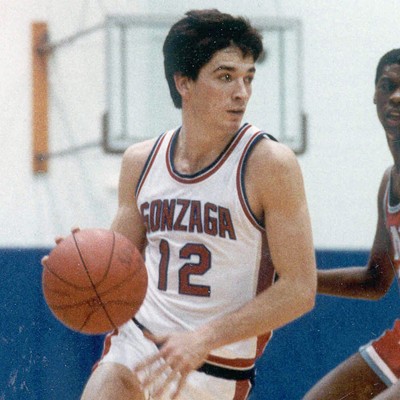