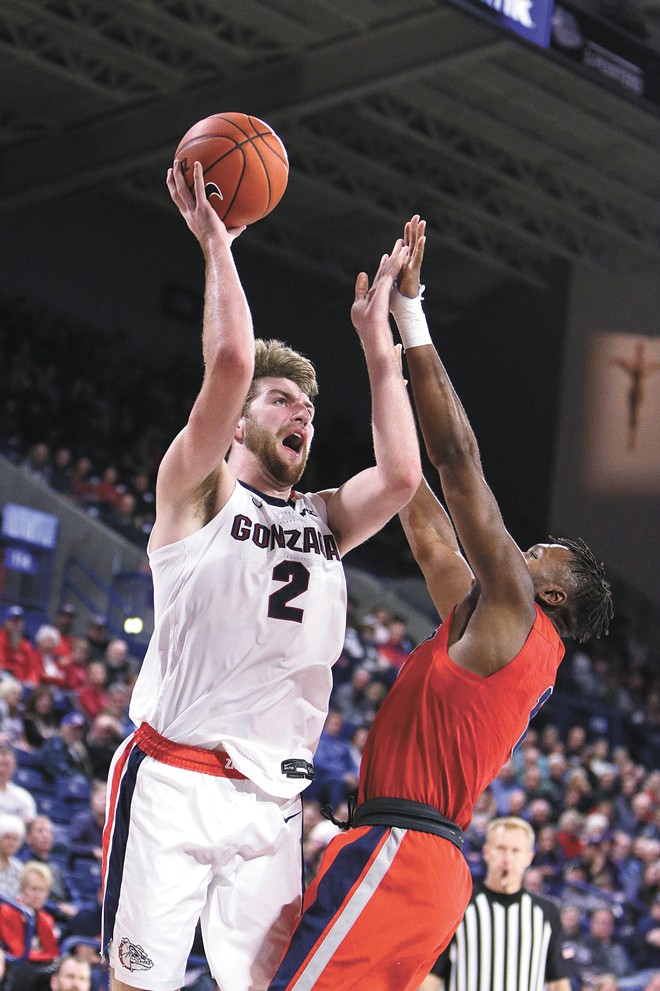 Young Kwak photo
Drew Timme has magical feet, and a soft touch around the basket.

This past December, Gonzaga played two games against the Northwestern State Demons on back-to-back days. During the second half of the Demons' second consecutive lopsided loss in Spokane, Northwestern State big man Larry Owens backed down Gonzaga's Drew Timme, scored on him and drew a foul.

Then, Owens ran his index fingers across his upper lip and extended his arms out into the air in celebration. It was a carbon copy of the celebration Timme had done after scoring on the Demons in the previous game. Owens didn't steal it from Timme, though, and it wasn't done out of malice. Owens had asked Timme for his blessing prior to using his own celebration against him.

"I was like, 'Yeah, bro, go ahead,'" Timme said after the game. "I thought it was cool someone wanted to do it. Pretty funny, you know. I find it funny. I do it because it's just a little joy for me. If it brings others joy, then good."

That's Drew Timme for you. Even the guys he's playing against, the guys he's normally outplaying to be quite honest, find it hard not to like him.

His quirky nature was on display well before he arrived in Spokane, though. The 6-foot-10 forward from Texas was seen as a top-50 prospect in the class of 2019, and as a result he received offers from dozens of programs around the country. Most elite recruits make a big deal on social media about their recruiting process. But Timme largely stayed out of the spotlight.

Soon after arriving in Spokane, though, the spotlight became impossible to avoid.

An impactful player coming off the bench a year ago, Timme has blossomed into one of college basketball's best players as a sophomore. As of press time, Timme leads the Zags in scoring, at just under 20 points per game, and rebounding, with more than seven per contest. He's a versatile forward who can bring the ball up the court or back an opponent down with strength and sublime footwork on the low block.

While this year has been his breakout season, launching himself into All-America and NBA draft conversations, those in the know saw this coming.

During the Zags' final game last season, an 84-66 win over Saint Mary's in the WCC Tournament just before the coronavirus brought the season to an untimely halt, ESPN's eternally excited color commentator Dick Vitale helped introduce Timme to the nation.

"He's my favorite player," Vitale said while calling the game, between exclamatory outbursts of "Oh baby!" and "Timme!"

"I think they are going to love him in Spokane because he's going to be special."

Dickie V was mostly correct in that assertion. The only thing he got wrong was that people in Spokane already loved him. Back then, fans were allowed to attend games. The ones who arrived early got to watch Timme, the team's self-appointed handshake maestro, practice his handiwork with the young kids who mingle beside the court during pregame warmups. As the youngsters reach out for high-fives, most players oblige with a classic open palm, but not Timme. The sight of the big man intricately dapping it up with children half his size and age is nothing short of instantaneously endearing.

Timme's personality and sense of humor shine through like few Zags' before him. Whether it's the handshakes or the facial hair — usually bearded, Timme has on a few occasions this season rocked a mustache that makes him look like the slimmer second coming of Hulk Hogan — those antics are just part of what makes Timme a beloved presence for the Zags.

And like the rest of the team, he's a fierce competitor.

At that they've succeeded. Timme's arsenal of offensive moves around the basket has helped Gonzaga spend this season rated as the best shooting team in the country. In a sport that has become more and more enamored with the three-point shot, the Zags are bucking the trend, thanks in large part to Timme. The Zags have knocked down 64.5 percent of their two-point shots this season, and they're taking a ton of them. Gonzaga is among the 20 teams in the country most reliant on two-pointers.

Like the team as a whole, there's quite a bit of finesse to Timme's game, but sometimes all it takes is physical power.

"We're a physical team," Timme says. "We go against each other every day in practice."

That work, put in when nobody is watching, is what allows Timme to make highlight plays at the rim. Like earlier this month against Pacific, when Timme sealed his defender in the paint, caught a dump-down pass from Corey Kispert and pushed his defender out of the way for a one-handed slam.

Timme busted out his mustache celebration after the play and brought a moment of levity to an otherwise hard-nosed game.

"I think it's good to de-stress, especially on the court," Timme says of his jovial nature. "It kind of lightens the mood in serious games."

In one moment there's pure focus, physicality and a tenacious will to win. In the next, he's just a guy having fun playing a game he loves. The two sides of Drew Timme don't seem like they should exist within one person, but that's what makes Timme so special. ♦