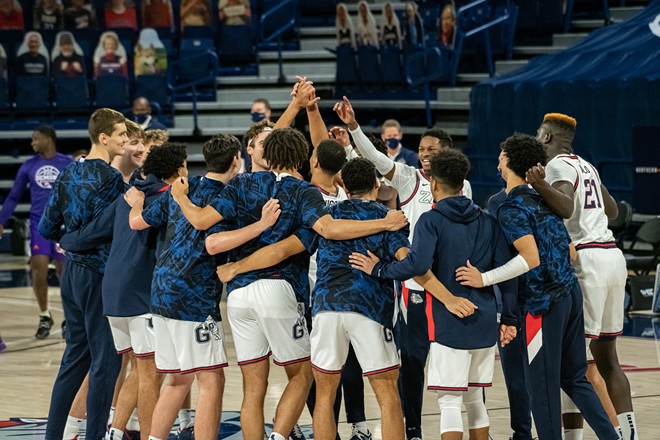 From November into early April, Gonzaga had its way with nearly every team that stood in its path. For 31 games, the Zags blasted through everyone. Until the 32nd game, when they saw a team do to them what they had done to all who had come before.

Baylor, like Gonzaga, put on a massive undefeated run to start the season. It was only after an early-February COVID outbreak that shut the team down for a couple of weeks that they looked vulnerable. By the time the tournament rolled around, though, they’d returned to form.

That return to form was what college basketball fans wanted to see, and it helped set up the dream game against the Zags. A dream for everyone except those of us in Spokane.

Gonzaga was trying to do something historic by winning an NCAA Tournament without a loss all season, something that hadn’t been done in more than 40 years. To do that, though, they’d have to pull off a historic first. Four times prior the preseason No. 1 and No. 2 had met in the national championship game and four times prior the team ranked second came out on top.

Make it five for five, as Baylor defeated Gonzaga 86-70 at Lucas Oil Stadium in Indianapolis to claim the title.

The gut punch came early, with Baylor scoring nine unanswered to open the game and then extending the lead to 29-10 halfway through the first half. Baylor drained 7 threes over the first 10 minutes, during which time Gonzaga committed 6 turnovers. One team was red hot on the offensive end and the other could barely get the ball into that half of the court.

So, the Zags did something they almost never did this season; an offensive juggernaut for 31 games, the Zags clamped down on defense, went into a zone, and clawed their way back into the game. After opening on that 9-0 run, Baylor outscored Gonzaga by just one point for the remainder of the first half. With the defense causing problems and the offense finding energy as a result, the Zags pulled within 10 at the break and had all the momentum on their side.

Or, not. Baylor opened the second half exactly the way it opened the first.

Gonzaga was outrebounded 38 to 22 and Baylor held a 16-5 advantage in second chance points. After their first shot of the second half missed, the Bears grabbed the rebound. They missed again,  but grabbed yet another offensive rebound. That time the ball made its way outside and was splashed in for three points. Even after a solid defensive possession, Gonzaga gave up a triple.

Gonzaga cut the lead to nine points at the 14:29 mark, and it felt like momentum had swung their way once again. As was the case five minutes prior, Baylor answered. Less than two minutes later the Bears’ lead had grown to 16 points. And from there it was as good as over, even as more than 12 minutes remained on the clock.

In the end, Gonzaga managed to keep it somewhat respectable. A 16-point loss on the sport’s biggest stage might not seem like keeping it respectable, but this one felt like a 30-point blowout at times. Especially when Zag fans had grown used to watching their team put the beatdown on the opponent. The script flipped on them in the worst possible time.

That said, and as much as this loss is going to sting — this season was as close to championship or bust as any I’ve seen in Spokane — it doesn’t diminish the totality of what this team did. Gonzaga didn’t lose a game until the final game of the season, a game between the two teams that spent all season long atop the sport. A win would’ve been better, and a closer game if nothing else, but up until the final 40 minutes of the season the Zags and their fans got everything they could have wanted and more.