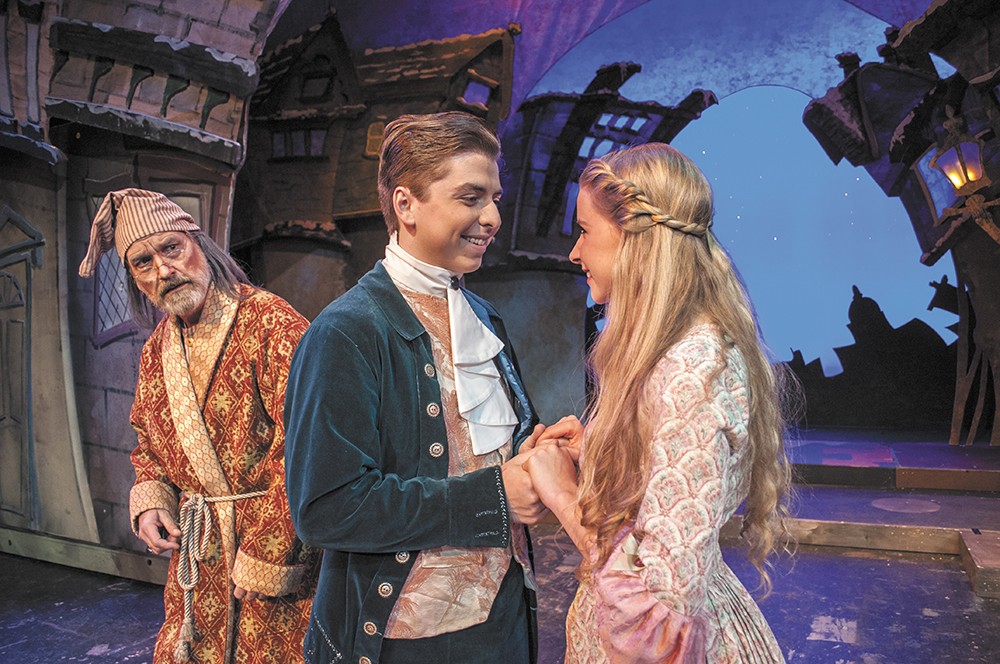 The set of the Civic's production

of A Christmas Carol: The Musical delights in skewed proportions. The Tudor houses warp farther inward the closer they are to the cyclorama. The chimney in the Cratchit house bulbs out at the sides as if puffing its cheeks to expel smoke. Even the canopy of Scrooge's bed has a cheeky curved sweep to it. Altogether there's a wonderful sense of dimensionality and playfulness. It's all faintly Disney-ish.

That seems apt given that Alan Menken, the composer behind Tangled, The Little Mermaid, Beauty and the Beast, Aladdin and several more highlights from the Disney canon, also wrote the music for this song-and-dance version of Dickens' holiday-themed morality play. And, like the best of Disney, lyricist Lynn Ahrens complements the qualities of David Baker's beautiful and versatile set by eschewing schmaltz in favor of psychology and humor.

This is the first production overseen by the theater's new artistic director, Keith Dixon, yet its strengths and shortcomings are consistent with many Civic main-stage shows of the past. Thomas Heppler, the Scrooge of three Christmases ago, reprises a role in which he clearly excels. Then there's the set, of course, along with the outstanding costuming by Jan Wanless (Heidi Santiago's dazzling dress as the Ghost of Christmas Past is the pièce de résistance) and the massive hustle-and-bustle scenes where it seems like half of Spokane has flash-mobbed the stage. The orchestra has volume of size and sound on its side.

But that scale comes at a price. Changes from the crowd-heavy scenes to the more intimate ones leave distancing empty space when, say, Scrooge is milling about his bedroom and grumbling to himself. The same soupy audio that affected the 2011 (non-musical) staging of A Christmas Carol was acute in the first act of this one; the dialogue was inaudible, and only the full ensemble was able to go head-to-head with the orchestra. The cast and crew are also working on the choreography and cues. The general impression is that this fun holiday production, though impressive in many of the usual aspects, is still getting to grips with its slack and fray.