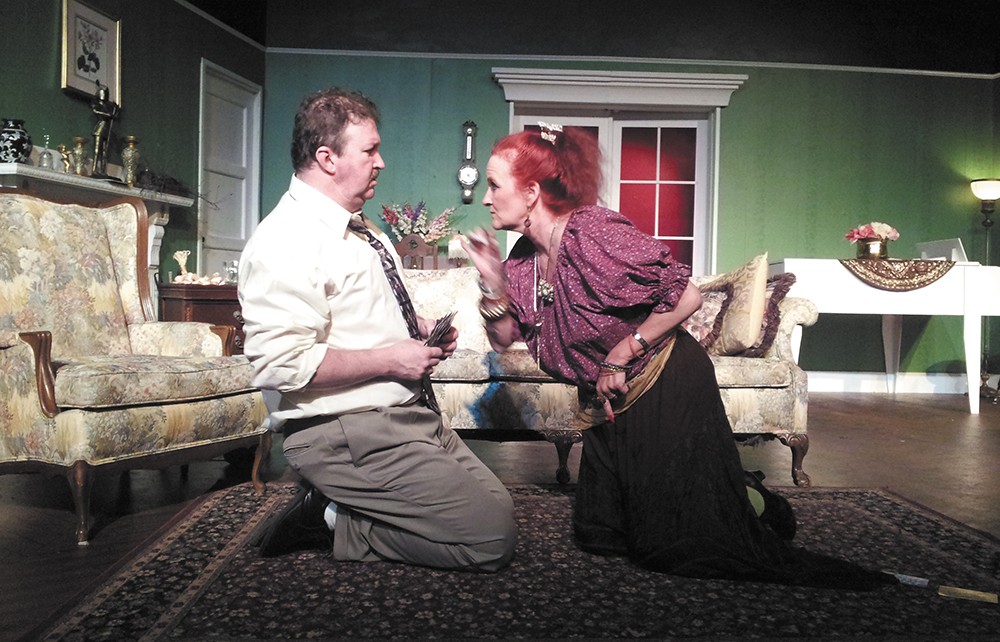 There's trouble on the homefront in Blithe Spirit.

As research for his next novel, the author Charles Condomine (Scott Finlayson) and his wife Ruth (Ingrid Schwalbe) have invited their friends the Bradmans (Carl Vincent, Anne Selcoe) and the oddball medium Madame Arcati (Lulu Stafford) to their house for a séance. Instead of being a bit of harmless amusement, the ritual opens the door for the ghost of Charles' mischievous first wife, Elvira (Nancy Gasper), to enter from the spirit world.

Unseen by all but her former husband, the phantom Elvira taunts him and Ruth to the breaking point. She also has an ulterior motive, which ultimately injures the constantly flustered housemaid Edith (Jessica Rempel) and forms the basis for the second and third acts. This leaves it to the increasingly wearied Charles and flighty Madame Arcati to ensure that any lingering spirit gets a swift return to the astral plane.

Noël Coward's "improbable farce" from 1941 is full of quotable Wildean quips, and despite its enduring reputation as a classic comedy it explores the nastier side of romantic jealousy without ever getting mired in solemnity. Its casual treatment of marital infidelity seems downright bold considering its era.

What haunts Blithe Spirit in general is its length. The running time easily clocks the better part of three hours, making its umpteenth fusillade of upper-crust insults more like a private indulgence than a dramatic necessity.

This leads to moments when the center cannot hold in this production directed by Karen Brathovde. The tautness sags, the excess action muddles the dialogue, and the full-cast scenes get wobbly. Some of this stands a good chance of remedying itself as the show continues its run; some could have been preempted by judiciously snipping lines, theatrical rights allowing.

Finlayson is persuasive as Charles, but he begins and ends his sentences with a groan right from the outset, leaving him nowhere to go but higher in pitch as his exasperation grows. Both he and Schwalbe, who hits Ruth's single note solidly throughout, affect convincing accents. Stafford's Arcati sounds more Welsh; intentional or not, it suits her character well. Mark Lanterman and Paul Wiersma's set not only evokes Condomine's upper-class living room beautifully, it's also functional enough to perform the work of invisible hands.