Darkness to the extreme in Civic's production 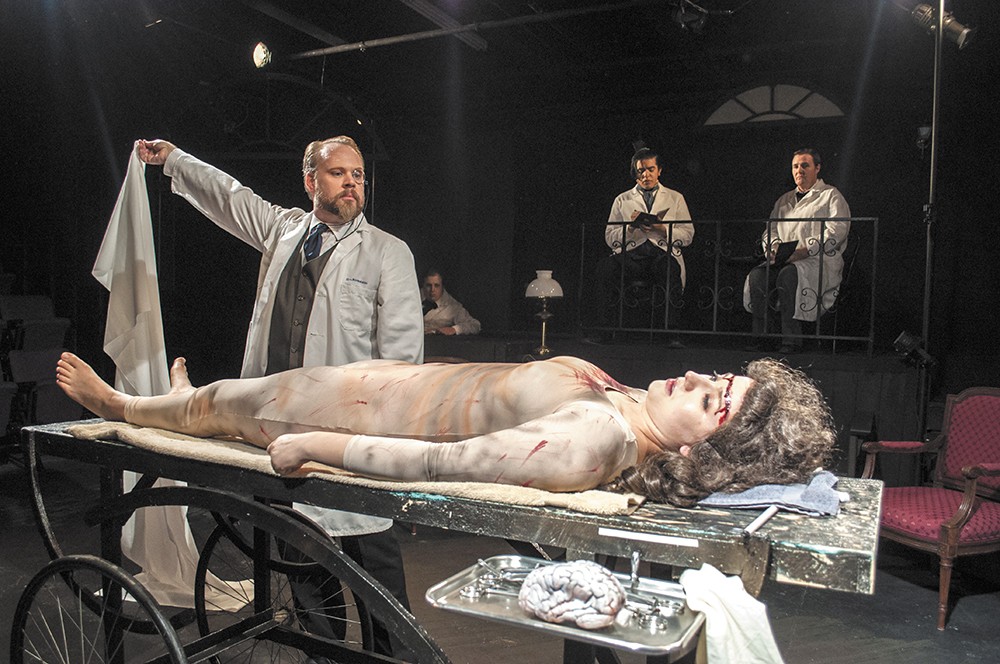 a classic Gothic tale of horror, an attack on the Victorian concept of morality, an early examination of dissociative identity (aka "split personality") disorder, an allegory of substance abuse and addiction. That might account for why its story, by now a common cultural touchstone, has been revisited and revised for stage, film, radio, television and literature several dozen times since its publication in 1886.

In the Civic's current production of Hatcher's adaptation, directed by Susan Hardie, the drama plays out beneath the low ceiling of the theater's Firth J. Chew Studio. The sense of confinement isn't entirely out of character with the tale or its emotional pendulum of repression and catharsis, but David Baker's set and Jan Wanless' costumes take things a step too far. The color palette consists of matte black on matte black — this includes the floor, walls, stage, suits and most props — with the occasional speck of burgundy from a seatback or cloak lining.

Coupled with the feeble, flickering lighting, presumably to enhance the mood, the overwhelming feeling is of being in a closet with a faulty night-light. Not content with the play's figurative darkness, director and designers have doubled down on darkness at its most literal.

Along with their primary roles, actors Dan Griffith (as lawyer Gabriel Utterson), R. Travis King (quack physician and "pornographer of death" Sir Danvers Carew, among others), Ryan Shore (Dr. Lanyon, et al.) and Dawn Taylor Reinhardt (Poole the servant, et al.) all have turns as Hyde with varying success. Reinhardt offers the most satisfying character transformations, affecting solid accents and distinct personas; but it's Shore who has the most to work with in his incarnation of Hyde, Jekyll's bad-boy ticket to the heart of Elizabeth Jelkes (Molly Tage). His lovesick desperation makes him more sinister and more sympathetic at the same time.

Henry Jekyll, played by Dave Rideout, serves as the main vehicle for the dialogue's toe-dip into philosophy. He briefly contemplates good and evil, often with the other characters as a sounding board, without taking these thoughts further than their mention. In that way, this production suits the play's preference for shadow over illumination.