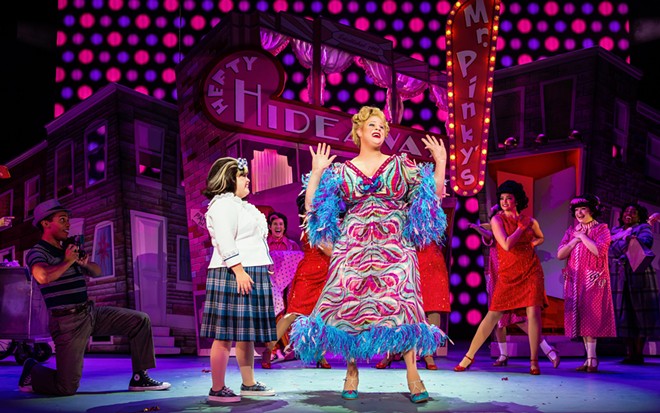 Courtesy photo
Drag queen Nina West steals the show as Edna Turnblad in Hairspray's touring Broadway production, in Spokane through Sept. 25.
Based on the 1988 film of the same name, Hairspray follows a Baltimore teenager, Tracy Turnblad, in her attempts to secure a spot as a dancer on the Corny Collins Show and relieve the racial tension that's present on set. Oh, and convince Link Larkin to fall in love with her.

On the surface, Hairspray looks like a happy-go-lucky sing and dance along show, and that it is; however, underneath the sequined dresses and voluptuous hair are some simpler approaches to understand racism in the 1960s, as well as today. Tracy's attempts at conquering segregation in Baltimore's dance scene are half-baked at best, but in the end, work out just fine, and the Corny Collins Show officially integrates, allowing Black and White dancers to boogie, scoot and jive together on live television.

Hairspray is playing through Sept. 25 at the First Interstate Center for the Arts, and if you plan on grabbing a ticket, know that you'll leave with an ear worm or two.

Classic songs like "Good Morning, Baltimore" and "I Can Hear the Bells" are flawlessly executed by the musical's leading lady, Niki Metcalf. Metcalf's smiling face is present in nearly every scene, jumping and dancing about, but her vocals never waiver. Link Larkin, played by Nick Cortazzo, matches her energy perfectly in every scene the two share, and his harmonies are a perfect addition to her powerhouse vocals.

Speaking of powerhouse, Sandie Lee, who plays Motormouth Maybelle, is an absolute stand-out performer. Her timbre is pleasing to the ear and her performance of "I Know Where I've Been" provides a break from Hairspray's exceedingly upbeat musical numbers, of which the show is chock-full.

The Spokane run's opening night audience recognized her talent as well, hollering and cheering after every riff and vocal embellishment. Normally, cheering in the middle of a scene or a musical number is looked down upon, but Hairspray begs for laughs and cheers from the audience all throughout the show.

Subtle odes to Spokane were littered throughout the performance with nods to Riverfront Park's Garbage Goat and Dick's Hamburgers in places that garnered guffaws from audience members. The audience can make or break a live performance, and this group added to the already hilarious physical and verbal comedy present on stage.

The 2007 Hairspray film featured John Travolta as Edna Turnblad, Tracy's mother. Though maybe not as much of a household name as Travolta, Nina West steals the show as mama Turnblad in the stage version. West, who goes by Andrew Levitt when not in drag, is a former contestant of the reality TV show, RuPaul's Drag Race. Anyone who's seen the show knows just how enigmatic West is — it's hard to take your eyes off of a 6-plus-feet-tall drag queen, but you wouldn't dare take your eyes off of her anyway.

Though the costuming and hair department deserves a round of applause for their period-accurate contributions, the shiny 60s dresses and slick suits were a contrast to the relatively minimal sets that were used throughout the production. Whether it was intentional as to not distract from the stylish garb the cast was wearing or not, the gaps on either end of the stage were glaringly obvious at times.

Hairspray is a great introduction to themes of racism, class inequality and body positivity. While the way these ideas are presented is a bit shallow,  you can't expect a musical about dancing teenagers to solve society's biggest challenges in just three hours. Hairspray is a favorite among musical-goers for many reasons, but the fact that it could introduce themes of tolerance and equality to younger audiences is enough to make it a must-see in my book. ♦