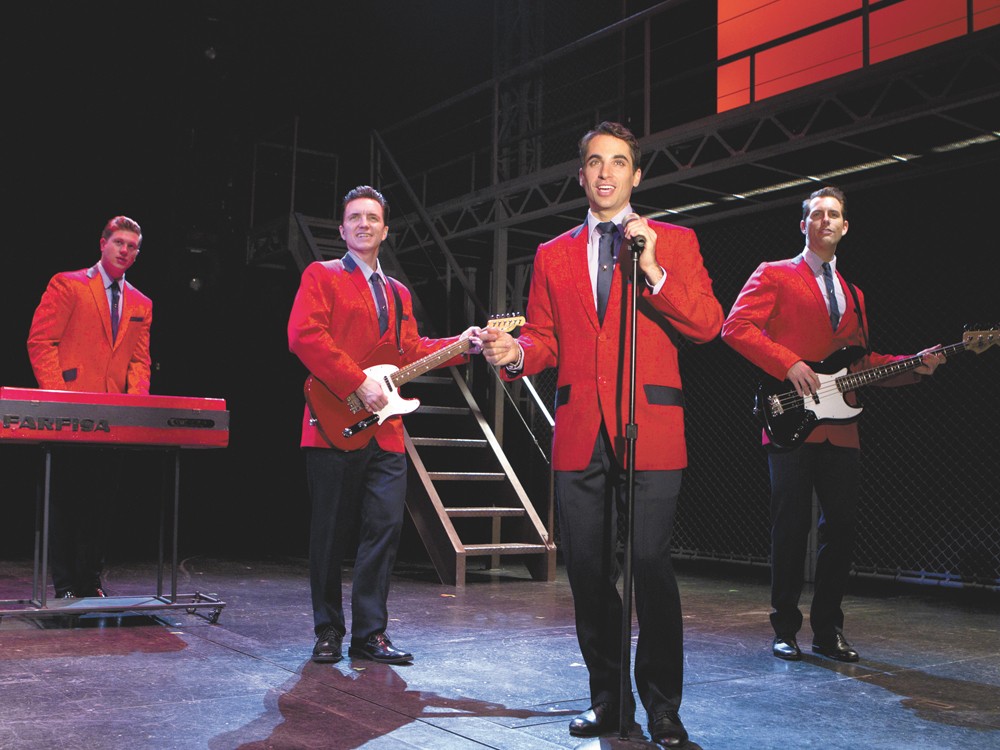 Joan Marcus
Oh, what a night...

There’s a sequence in Jersey Boys that runs something like this:

FRANKIE VALLI: Things are great. My life’s back on track. I talk to my once-estranged daughter every Friday.

A massive illuminated guitar descends from the heavens.

VALLI: It’s now two decades later, and we’re in the Rock and Roll Hall of Fame!

Bandmate TONY DEVITO: Sorry to hear about your daughter, paisan.

The group launches into “Rag Doll.”

That’s roughly the level of depth and complexity you can expect from this musical that dramatizes the tumultuous career of the Four Seasons, the blue-collar band from the Garden State that tossed out doo-wop hits like “Sherry” and “Big Girls Don’t Cry” during its 1960s heyday. Jersey Boys is big on music (its chief strength, as it ought to be for a jukebox musical), big on razzle-dazzle (not an inch of fly space goes unused, and the lighting is blinding) and big on gratuitous profanity (because the f-word in profusion is inherently funny, right?), but it skims through an otherwise compelling backstory at a pace that’s positively merciless.

This unrelenting rush of sight and sound might have been both desirable and necessary. It’s no secret that the audience dominated by Baby Boomers will have arrived hungry for quality Seasons covers. And how else can one cram in 34 musical numbers to sate that cumulative appetite?

But if you’re not watching Jersey Boys to appraise the authenticity of Nick Cosgrove’s (as Frankie Valli) falsetto or relive stardust memories, the hook comes down to the people and their stories. The core material — run-ins with the mob, shattered family lives, the perils of overnight success, pigheaded label execs — is clearly there, which makes Jersey Boys far meatier than most of its counterparts. The drawback (or selling point, depending on your point of view) is that it comes like a whirlwind of cotton candy. In that respect, it’s an ideal vehicle for the Four Seasons’ music.