For Cage Match, several teams square off each week. Those weekly winners — based on audience votes — then compete against one another at the final showdown for the crown of local improv comedy. Expedition and Safari, by contrast, are longstanding, family-friendly shows with a classic interactive improv format.

Anyone who gets swept up in the ad-lib action can join other intrepid souls and an improv instructor on Tuesday evenings in July and August for the Improv Jam Session. "Think of it like an improv open mike," says O'Halloran-Foerg. "It won't be a structured class. People can just drop in for $5 — no experience necessary."

The last Thursday of June, July and August brings Sideways Cinema, a new experiment that combines Mystery Science Theater 3000 with the Blue Door's own penchant for pulling narrative out of thin air. "We take an old, classic, really bad sci-fi movie, turn off the sound, and then the Blue Door players re-dub the movie with a story on the spot." It's for mature audiences, though, so parents will want to line up a sitter. The same goes for all the After Dark-themed shows with 10 pm curtain times on the last Friday of each month.

During the Garland Street Fair (Aug. 8), you can pop by the Blue Door for one of five free shows on the hour. Details on all that and more are at bluedoortheatre.com.

Let's say you're two weeks into summer and already the kids are bored. You could sign them up for a tour on an Alaskan fishing boat, which might give them a solid pair of sea legs. Or, better yet, you could give them a constructive creative outlet in the form of a theatrical summer camp.

At the Spokane Civic Theatre (spokanecivictheatre.com), there are regular four-day camps for kids entering grades 1-3, grades 2-4 and grades 4-7 starting now and running throughout the entire summer. To make it even more convenient, there's a morning session ($115), a late-morning set-making session ($50), and an afternoon session ($115). You can choose one or all of them, and space permitting, you can usually sign up as late as the week beforehand. "It's a little bit more flexible in that way," says Miranda Larson, marketing and communications manager at the Civic.

She also encourages parents in need to make use of the scholarships. "Don't let the cost deter you. We do have a really generous community that donates to our scholarship fund, and so we're able to offer more opportunities to students who maybe can't afford it but would still benefit."

The youth productions being staged this year (twice each Friday in June, July and into mid-August) include Kid Icarus, Snow White and The Chronicles of Narnia. Admission to all of those is free and they're open to parents as well as the public.

The Blue Door Theatre will offer 10 weeks of evening Teen Summer Improv Classes ($150) between June 29 and Aug. 31. Youth aged 11 to 18 will learn the basics of improv in anticipation of a final performance for friends and family. Despite the pride they take in spontaneity, the Blue Door is asking participants to pre-register well in advance because of limited space.

Down in Moscow, the Idaho Repertory Theatre for Youth is hosting a camp for 6- to 16-year olds. That runs full afternoons from July 20 to Aug. 7 at a cost of $140. Participants will work with artists and University of Idaho students to create a half-hour staging of A Midsummer Night's Dream on Aug. 8.

Stage Left has been on a roll this season, staging solid productions of the kinds of niche and non-mainstream shows that stay with you long after the curtain falls. They're closing out that strong season with Steel Kiss (June 12-28). Directed by Daniel McKeever, this vignette-style play sees four teenage boys savagely beat a gay man to death in a park, following an unsettling transition from innocence to malice. Tickets, as always, are just $10 and available from spokanestageleft.org.

Anyone who missed the staged readings or the work-in-progress productions of this locally written original show by Kristin Cooper Herby and Tom Cooper will get one more opportunity to catch it — this time at the Bing on Aug. 29. The Clink is a dramedy-style musical that centers on naive and sheltered Fifi, who winds up sharing a cell with three rough-and-tumble criminals when she gets jailed for a DUI. Based on a true story. Seriously. More info and tickets are at bingcrosbytheater.com.

Just before the kids head back to school, treat them to a Coeur d'Alene Summer Theatre production of Shrek the Musical (Aug. 6-23) at the Kroc Center. This all-ages (well, 4+) song-and-dance show stars all the popular characters from the animated franchise, like Donkey, Lord Farquaad and Princess Fiona. And better yet, it's in 3-D — no glasses required. Visit cdasummertheatre.com for more details on Shrek or the other CdA Summer Theatre productions, First Date (June 18-21) and Singin' in the Rain (July 9-26).

REASONS TO BE HAPPY / ASSASSINS

The final productions of the Modern's current season are Reasons to Be Happy (June 12-28 at the Spokane location) and Assassins (July 24 to Aug. 9 at the Coeur d'Alene location). The former is the anticipated follow-up to former Spokanite Neil LaBute's Reasons to be Pretty, staged at the Modern earlier this year. The latter is a wry Sondheim musical about the men and women who've tried to off the president throughout history. Both have mature themes and language, so it's best to leave the kids at home. Details at themoderntheater.org. 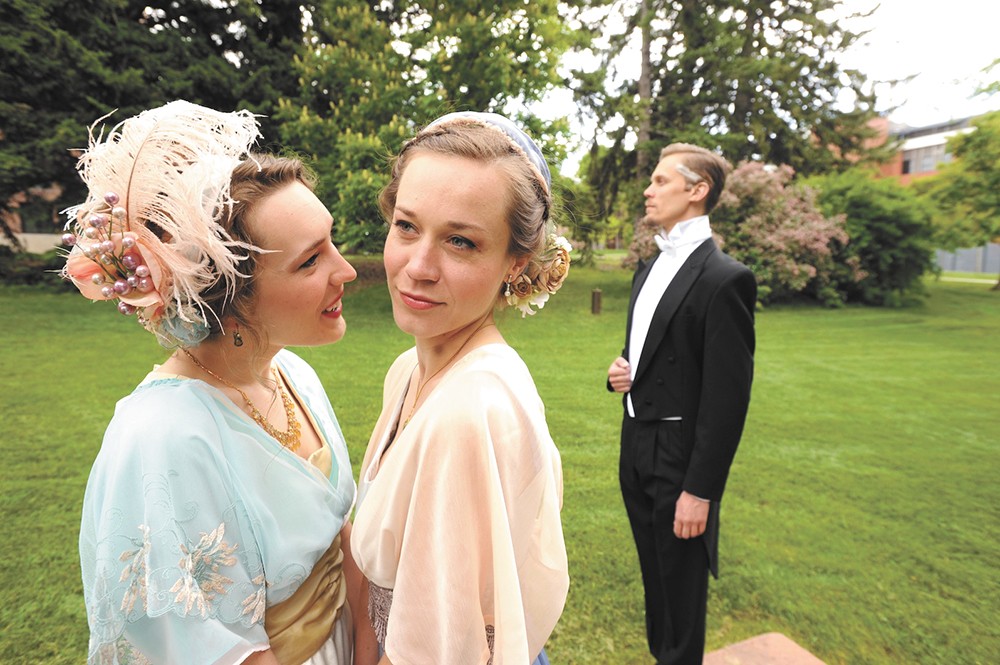 Montana Shakespeare is coming to Washington and Idaho this August.

Empire Theatre Company is a lean, under-the-radar local troupe that, up until last year, did dinner theater at the Lincoln Center. This summer they're branching out into repertory for the first time. Catch them at Stage Left for Noël Coward's evergreen Private Lives (July 8 to Aug. 2), in which a divorced couple falls for one another all over again while honeymooning with their new spouses. Between July 22 and Aug. 2, ETC will stage Cupids, an original romantic comedy penned by their very own Hazel Bean. Tickets and info at etcspokane.com.

Families in the Palouse area should check out the Idaho Repertory Theatre for Youth's staging of Swan Boy (June 20, 27 and July 11) at the Forge Theater in Moscow, Idaho. Based on a Hans Christian Andersen tale, Swan Boy is about a girl charged with lifting the curse on her brother with the aid of a forest gnome. Best of all, in keeping with IRTY's mission to imbue children with a love of theater, the performances are free. Details at uidaho.edu/class/irt. For adults, the Kenworthy Performing Arts Center (kenworthy.org) down the road has special National Theatre Live showings of David Hare's Skylight (Aug. 20) and Ralph Fiennes in Man and Superman (July 16).

SHAKESPEARE IN THE PARKS

Montana Shakespeare in the Parks is crossing the state lines this summer to bring Idaho and Washington residents two classic plays en plein air: The Swan of Avon's witty The Taming of the Shrew and Edmond Rostand's Cyrano de Bergerac. Shrew is at the Bonner County Fairgrounds in Sandpoint on Aug. 21 and at Riverfront Park in Spokane on Aug. 23. Bergerac is at Liberty Lake's Pavilion Park on Aug. 22. All three performances are free and open to the public. Visit shakespeareintheparks.org for details. Oh, and make yourselves comfy with blankets, folding chairs and picnic items. ♦