All the world is a stage! 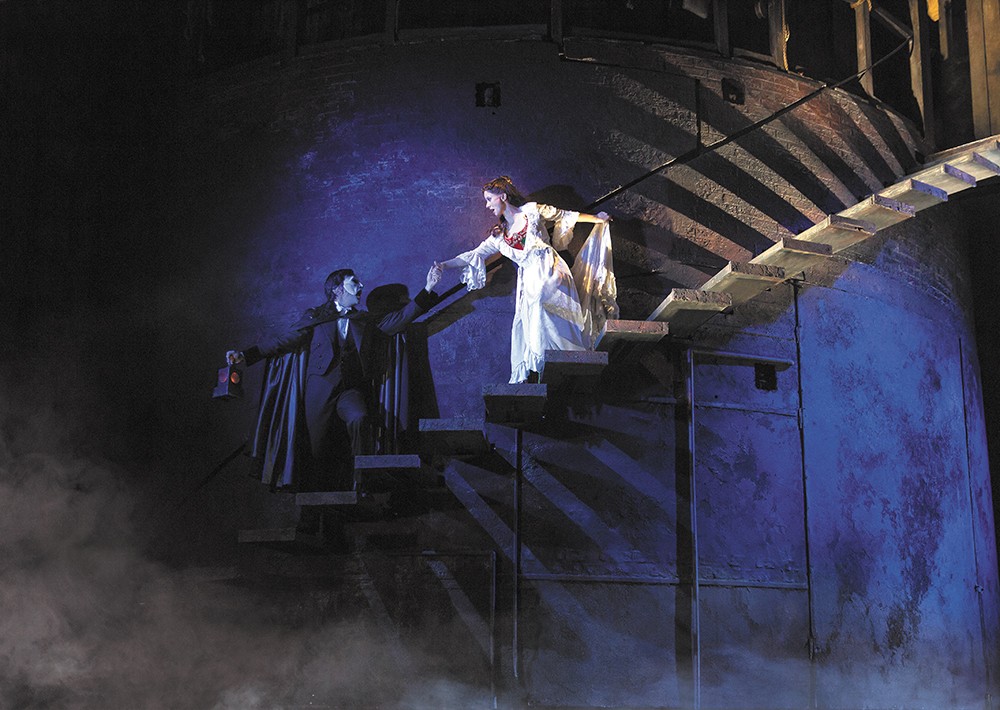 Mathew Murphy
Phantom of the Opera is coming to town as part of the Best of Broadway series.

Best of Broadway It's called the Best of Broadway for a reason — this theater series brings all the greatest broadway shows to Spokane, convenient for all resident broadway aficionados. This season brings a range of shows, including three currently playing on Broadway; Beautiful, Kinky Boots and Phantom of the Opera. The 2016-2017 season also includes classics like Pippin, Cinderella and Annie. Mamma Mia fans take note — it's coming to Spokane this season on its farewell tour.  Spokane, Wash. • 777-6253 • wcebroadway.com"

Blue Door Theatre Spokane's home for improv comedy lies at the Blue Door. Improve (or make) improv skills in classes for youth, teen and adults, go to performances on Friday and Saturday nights or even participate in an improv lab on every first Tuesday. Make sure to check their website before you bring along the kids — not all the shows could be considered Rated G.  Spokane, Wash. • 747-7045 • bluedoortheatre.com"

Spokane Comedy Club After Spokane lost its longtime spot Uncle D's Comedy Club in early 2016, a new venue soon helped fill that void. The downtown Spokane Comedy Club hasn't let local fans down so far, bringing in a long list of nationally known and local/regional funny folks. For its first few months of operations, big names in the biz including Craig Robinson, Marc Maron, Chris D'Elia and Iliza Shlesinger made our sides ache, along with many others. Also catch open mic nights and other one-off events when a big name isn't stopping through. Spokane, Wash. • 318-9998 • spokanecomedyclub.com

Spokane Valley Summer Theatre With its inaugural season in the summer of 2016, the Spokane Valley Summer Theatre is off and running. Its first-year line-up included peformances of Buddy: The Buddy Holly Story, Oliver! and Bring it On. Kids can join in through SVST's acting conservancy program, too, with sessions for all ages. Performances take place at the state-of-the-art Central Valley Performing Arts Center at CV High School.  Spokane, Wash. • 368-7879 • svsummertheatre.com

Christian Youth Theater Spokane Christian Youth Theatre in Spokane and North Idaho has options for spectators and aspiring actors: you can take classes and perform in shows during the school year as well as participate in a number of camps over the summer. Audience members can buy tickets for shows shown in Spokane and North Idaho theaters throughout the year. Spokane, Wash. • 487-6540 • cytspokane.com | Dalton Gardens, Idaho • 208-762-9373 • cytnorthidaho.org/homepage

Ignite! Community Theater This community theater lives up to its name — Ignite! is all about getting the community involved with every part of putting on a show. In addition to performances, they host the annual Playwrights Festival Showcase, giving writers in Spokane a chance to get their work onstage. The 2016-2017 season includes On Shaky Ground by local radio personality Molly Allen, Farce of Nature, Tuesdays with Morrie, Scotland Road and Casting for Murder.  Spokane Valley, Wash. • 795-0004 • igniteonbroadway.org"

The Modern Theater Spokane Interplayers Professional Theater (Spokane) and Lake City Playhouse (Coeur d'Alene) merged in late 2014 to become The Modern Theater, with locations in both towns. New for the 2015-16 season, the nonprofit, semi-professional theater offered a summertime lineup of plays when the stage previously had been dark. Coming up for the 2016-17 season are local stagings of major hits including Chicago and American Idiot, along with a few classics. Spokane, Wash. • 455-7529 | Coeur d'Alene, Idaho • 208-676-7529 • themoderntheater.org

Pend Oreille Playhouse Newport, Washington's community playhouse strives to offer opportunities for everyone to learn and perform, hosting playwrights festivals, musicals and other performances throughout the year. The 2016-2017 lineup includes Choices, The Little Mermaid and A Christmas Carol.  Newport, Wash. • 447-9900 • pendoreilleplayers.org/

Sixth Street Theater and Melodrama This Wallace, Idaho, theater may have started as a summer theater, but now productions make the stage year-round. It's known around here for its regular melodrama productions, filled with over-the-top sensationalism, stereoptypes and improvisation, and many performances are totally original creations.  Wallace, Idaho • 208-752-8871 • sixthstreetmelodrama.com

Spokane Civic Theatre The Civic has won many a "best of" award for its outstanding productions through the years. Coming up for its landmark 70th season, happening through the middle of 2017, are performances of some major classics on the mainstage, including Beauty and the Beast, A Streetcar Named Desire, and Kiss Me Kate. In the studio theater, catch The Rocky Horror Show and The Taming of the Shrew. Spokane, Wash. • 325-2507 • spokanecivictheatre.com

Stage Left Theater Retired physicist Bob Nelson wanted to bring offbeat, politically edgy plays to Spokane, so he started up Stage Left Theater in 2013. In a small space downtown that seats 80, Nelson lets small groups perform without too many rules and sneaks in some performances himself, too.  Spokane, Wash. • 838-9727 • spokanestageleft.org

University of Idaho Department of Theater Arts Along with full productions staged each year, the theater department puts on the Festival of One-Act Plays with premieres of student-written and directed plays. Other events include the 10 Minute Play Festival and White Tie Improv.  Moscow, Idaho • 208-885-6465 • uidaho.edu/class/theatre