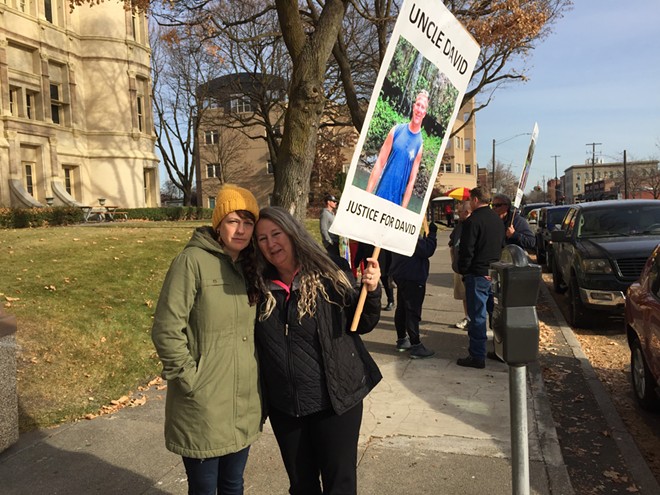 Josh Kelety photo
Justine Murray, left, stands beside Debbie Novak outside the Spokane County courthouse.
Justine Murray and Debbie Novak, both mothers of sons who were fatally shot by local law enforcement, picketed outside of the Spokane County courthouse on Thursday, protesting Prosecutor Larry Haskell's decision not to file criminal charges against the involved officers in either case.

Murray's son, Ethan, was shot and killed by a Spokane County Sheriff's deputy in early May near a homeless encampment in Spokane Valley after a 911 caller reported a disorderly male near playing children. He suffered from schizophrenia and meth addiction and had spent years in and out of hospitals, jail cells and homelessness before he died. A few months earlier, in January, a Spokane Police officer shot Novak's son, David, outside of his house after police received reports that he was shooting at a neighbor's home.

Haskell ultimately decided not to file criminal charges against the involved officers in both cases, arguing that they were justified based on their perceptions that the suspects were threats. In Murray's case, the deputy told investigators that he thought Murray was holding a knife when only sunglasses were recovered from the scene. Novak, meanwhile, was holding a baseball bat that officers allegedly mistook for a gun.

Haskell's ruling on the Novak shooting was issued in late August, while he weighed in on the Murray case in late October.

"I'm standing here, in front of this building, hoping that somewhere out there someone will realize that we need to hold our officers accountable when people are shot with no weapons," Murray says. "When will we stop shooting people that do not have weapons and need medical attention or need help? My son needed to be in the hospital."

"In each case, no matter how many times they were shot, [even] if they had mental illness, it didn't matter. If an officer was scared he was allowed to shoot and that's the bottom line. And it's not fair," she adds. "There is no accountability."

"Lives matter," she says. "And it doesn't matter if it's a homeless person or a person that lives under a bridge or a wealthy person. These are our kids," Novak says while holding a sign reading "JUSTICE FOR DAVID." "We're here in remembrance of my son, David Novak, and Justine's son, Ethan Murray."

Novak and an attorney, Rondi Thorp, filed a claim for damages with the city of Spokane over David's death in late August. They also submitted a claim with Spokane County on Nov. 1, claiming that county 911 dispatchers "negligently processed and delivered information to SPD, resulting in David Novak's death."

The Novak family has been picketing the courthouse for months since David was shot.

"We come the seventh of every month because David was murdered on Jan. 7 by the Spokane Police Department," Novak says.