Theresa May announces her resignation, leaving Brexit in limbo 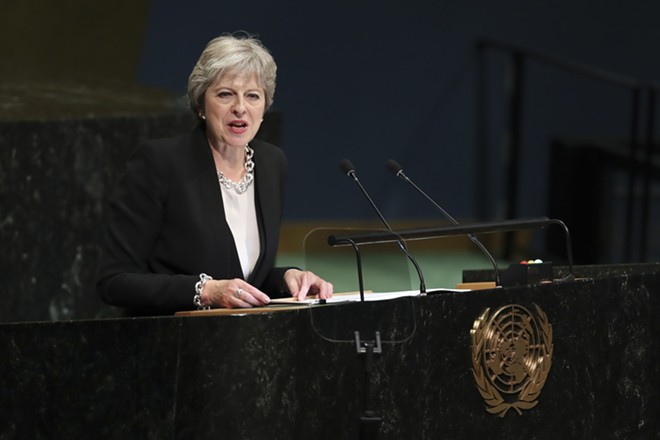 Chang W. Lee/The New York Times
British Prime Minister Theresa May addresses the United Nations General Assembly at UN headquarters in New York, Sept. 26, 2018. May told Conservative lawmakers on March 27, 2019, that she would step down if Parliament approved her plan for withdrawal from the European Union.

LONDON — Prime Minister Theresa May announced her resignation on Friday after three years of trying and failing to pull Britain out of the European Union, throwing her country into an unpredictable stage and setting off a bare-knuckled contest among other Conservative leaders to replace her.

As she stood behind a lectern outside 10 Downing St., May admitted that a different leader was needed to shepherd the split, known as Brexit. But she also warned that the unyielding stance taken by the hard-line factions of lawmakers who had proved her undoing would also have to change.

“To succeed, he or she will have to find consensus in Parliament where I have not,” May said. “Such a consensus can only be reached if those on all sides of the debate are willing to compromise.”

Whether such compromise is even possible in Britain’s polarized politics is unclear at best.

Brexit has splintered both the Conservatives and the opposition Labour Party into warring factions since the referendum approving the departure narrowly won on June 23, 2016. A second referendum that could keep Britain in the European Union remains a distant possibility.

May’s departure, eagerly anticipated even by members of her own Cabinet, is certain to mean a politically charged summer in Britain. May said she would step down as Conservative Party leader on June 7, a few days after President Donald Trump makes an official state visit. The contest to succeed her will begin the following week, and May will remain in office until her successor is chosen.

Brexit, meanwhile, will remain in a state of suspended animation until a new leader is chosen. Britain was originally scheduled to leave the European bloc on March 29, but the deadline was extended to Oct. 31 after Parliament refused three times to pass the withdrawal agreement that May negotiated with European leaders.

To decide her successor, Conservative Party lawmakers will first winnow a long list of contenders to two, then hand the choice to the party’s roughly 120,000 members, who are expected to choose the new leader around July.

That will leave the new prime minister only a few months to try to rebuild the wreckage of May’s deal — and then decide what to do if that fails.