They Stare Back at You

Tiffany Patterson is at the forefront of Spokane’s young creative class. 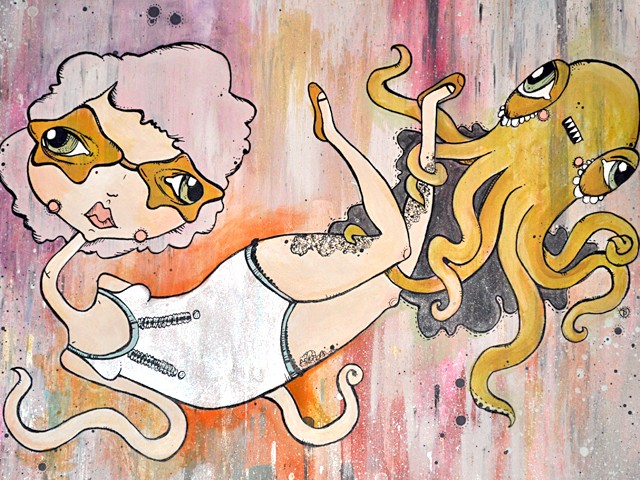 Her story is about art. But it’s also about being at the forefront of the young artist community, about proving that it’s possible to be an artist in the Lilac City, and that Spokane is friendly, willing and ready for a creative class.

But it’s still kind of a shock, it seems, to Tiffany Patterson. She gets pink in the cheeks when you mention it.

In the last two years since the first Terrain event — an enormously successful one-night annual arts blitz — you’d be hard-pressed to find another young local artist with more exposure than Patterson.

Today, her wispy, rosy-cheeked and pursed-lipped ladies pop up around the unlikeliest corners: on the walls of Neato Burrito, on a bridge embankment in Peaceful Valley and on the doors of Empyrean’s bathrooms. They’re inside a bike shop on East Sprague. They peer out from local zines and show posters. They’re custom portraits hanging in South Hill dining rooms.

Patterson says all of the attention — the requests for art, the gallery shows, the 338 Facebook fans — is unexpected. Before Terrain, she says, she was just creating her own little world of characters. And after it, she felt like Spokane had adopted her.

“I would say after Terrain was when my work really started to change,” she says. “I just think I got better. I think I got more comfortable painting.”

“The first ones were really simple. They were expressionless,” she says. “And then they got personality. And now they’ve got personality and a lot of detail. They just got more and more… I don’t know, I guess I figured out who they were.”

And that’s a question people commonly ask her: Who are these women she’s painting?

“Maybe I feel more connected to women?” she says, shrugging. “All my guys end up looking like girls.”

Her art is pretty. In pinks and baby blues, fuzzed-out peaches and muted yellows, she paints her muses — always sharp-chinned with glossy, limpid eyes. Bluebirds, deer and tiny, cloud-like ghosts — they all have those Tiffany Patterson eyes.

But Patterson’s art is just as dark as it is beautiful. In one painting, a bird flies past a house as it burns to the ground. In another, a woman’s hat is adorned with wilted flowers. Cupcakes are infested with worms. Bees are swarming. Tentacles are reaching down another woman’s throat.

“One thing I really, really love is that people bring their own experiences to [my art],” she says, “And oftentimes, people find way deeper meaning than this happy little place I’m at. I feel like I’m going to let them down if I tell them what it’s about for me.”

Though her art has gained popularity, Patterson hasn’t shown in a gallery until now (this month at Second Space Gallery.) It’s a show that features her art beside the work of local tattoo artists. Patterson plans to show the twisting, posing ladies she’s known for —but this time, adorned with tattoos (some tribal, some rockabilly).

“There is some sort of power behind tattoos,” she says of her paintings. “I wanted to show that they were strong. I wanted them to have a tiny bit of badass within soft happy portraits.”