Officially, Wild Sage's pork tenderloin au poivre is a year-round dish. Only the entree's fresh, local vegetables change with the calendar, but as rain drizzles on the sidewalk outside the downtown eatery, it feels like a meal designed precisely for this very moment of the year: When summer retreats as autumn invades.

You can watch the seasons change on the plate: A few flashes of green herb oil brighten one side. The brilliant colors of a watermelon radish. Crisp, fresh green beans — plucked by a small local farmer — are the last remnants of the fading summer.

Finally, the pork itself. Calling it tenderloin is an understatement. Melt-in-your-mouth soft without tasting the slightest bit undercooked, topped with a light sweet-and-sour gastrique, and basking in a rich, brown sauce.

Wild Sage Executive Chef Elijah Crume didn't come from a long line of culinary talents. His parents, he admits, at risk of insulting them, were pretty terrible cooks. It wasn't that they were doing anything wrong, exactly. They just didn't have the time to spend.

But Crume's aunt? The way she baked croissants, pastries — peach pie! — all from scratch? That was something magical: Cooking as a joy of its own, not just as a necessity.

"This is what food tastes like," Crume remembers thinking. "And then my mind starts clicking. It's like: How can I do this all the time?"

One of his first cooking jobs was as a line cook at a hip, new, little Spokane restaurant called "Wild Sage." In those early days, he says, some of Wild Sage's offerings ended up "scaring the Spokane food scene."

Maybe Spokane wasn't quite ready back then for, say, prawns with their heads still attached.

Gourmet cooking, at times, can be pretentious, even alienating. But it can also be a route to deepening the depths of the familiar, uncovering new contours of comfort food. Wild Sage's pork tenderloin doesn't come in an edible pillowcase. It isn't a post-modern genre-inverting deconstruction on the concept of "pork-ness."

"It's kind of a straightforward meat-and-potatoes kind of dish," Crume says.

The original version was developed by the restaurant's previous executive chef, Charlie Conner, a few years ago, when Crume was serving as his sous chef, the kitchen's second-in-command.

First, cover the tenderloin with the pepper rub. Next, sear it gently, before cooking very low and very slow in the Alto-Shaam, a high-tech kitchen oven that specializes in cooking food at precise temperatures for a long period. When it's the absolute perfect temperature (at least 145 degrees, of course, the health inspectors reading this article say aloud) slice it on the diagonal, and serve it with mashed potatoes, veggies and two types of sauces.

One is the gastrique. The other is a demi-glace — a classic French brown sauce made with veal stock — infused with sweet green peppercorns. The kitchen adds cognac, cooks it down, and finishes it off with heavy cream.

Even after you've generously dipped every slice of pork in the demi-glace, there's some left over. Swirl it through your mashed potatoes. Drag your carrots through it. Savor every last drop.

The pork is the headliner of the dish. But it's the brown sauce — the deep, rich chorus — that's the true star. 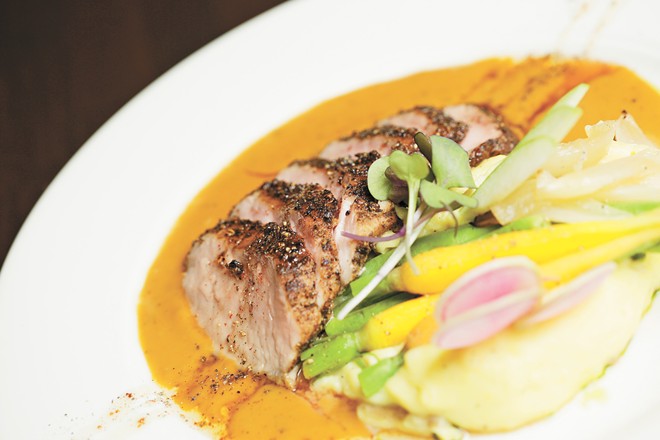 "The employees who work here, it's one of their favorite dishes," says Wild Sage sous chef Mike Busto. He's been working with Crume since the days they both cooked at Sante, Jeremy Hansen's high-end innovative French restaurant that closed several years ago.

Crume became Wild Sage's executive chef in 2020, a hell of a time to start leading a restaurant. First, the lockdown shut down in-person dining entirely. When serving to-go orders was allowed, the restaurant's team had to figure out how to translate a high-end fine-dining experience into something they could package into to-go orders.

One riddle: How do you cook pork tenderloin to the right temperature so it tastes just as good for those who reheat it at home as for those who scarf it down immediately in the parking lot?

With crisis comes opportunity, a chance to reexamine the dish, down to sauces and seasonings. Crume modified the gastrique, the light sour-sweet pink peppercorn sauce drizzled on top.

"We wanted something more flavor-based," Crume says. "Something that was sweeter, a better product."

And they changed their pepper rub. Today, it includes black peppercorns, green peppercorns, floral pink peppercorns, and mouth-numbing Sichuan peppercorns. But the flavor is "not overwhelmingly, punch-the-bass pepper," Crume says.

Credit the brown sugar, which not only serves as a glaze, but as a counterpoint to the intensity of the pepper.

"The balance of the spice on the pepper meeting the brown sugar of the rub, but also the sweetness of the gastrique — it's a really nice contrast," Busto says. "Two flavors, not colliding, but complementing each other."

But the pandemic's legacy continues to linger. As supply chain problems continue to reverberate throughout the entire food system, even longtime suppliers like Snake River Farms in Idaho were coming up empty some weeks.

Wild Sage switched to Carlton Farms in Oregon to keep the pork coming.

"But now we're printing [the menu] in-house, because every week we're running into the same issue with something else," he says. Sometimes it's been skyrocketing beef prices or the cost of cooking oil.

Outside the window, the skies are gray. The air is getting colder. Great local food is always about adapting to changing seasons. It's just that lately, the seasons are changing faster than ever. ♦