We gorged ourselves on faux cheeses so you don't have to. 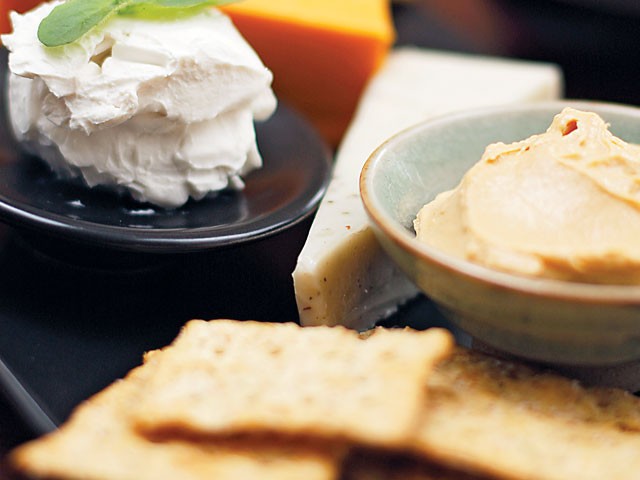 Young Kwak
75 percent of the world is lactose-intolerant. There's a cheese for that.

I am the proud owner of a healthy crop of lactase enzymes in my small intestine. This means I can eat all the aged Cheddar, Stilton and Camembert that I want without having to pop a Lactaid or run for the bathroom.

One can assume that being lactose intolerant would be a royal pain in ass. But at the same time, lots of people are choosing to omit dairy from their diets. In 2006, one in four college students identified themselves as vegan, omitting animal products of any sort.

Between people choosing to be vegan, cheese lovers who have high cholesterol and people who physically are unable to process lactose, the cheese shelves in supermarket dairy aisles are looking a little different. Intermingled amongst the usual cheese suspects are non-dairy-based “cheeses.” Almond cheese. Cheese made from soy, cheese made from rice. Cheese made from oats.

Being cheese lovers, we decided to give some of the stuff a shot. Is it just a last ditch alternative for the lactase deficient to cling to? Or is non-dairy cheese actually tasty? The answer, for the most part, is no, it’s not, really.

Over the course of the last few weeks, I’ve sampled all kinds of faux cheeses to see how they measure up to the real thing. And maybe it’s because I don’t have a physical ailment that prevents me from eating them — but most of them aren’t very good at all.

There are exceptions, however. At Yoke’s on Argonne and at Huckleberry’s (at the Y and on the South Hill), you can get your hands on a sizable bag of Daiya cheese in either cheddar or mozzarella. Vegans are going nuts for Daiya, a fairly new brand, because unlike so many faux cheeses it melts and stretches and gets all goopy for nachos and things like that. We used the mozzarella in a veggie lasagna, and the Daiya acted just like the real stuff — adding body and a creaminess when intermingled with our homemade marinara, whole-wheat pasta, mushrooms, spinach and spices.

And a week later, a friend threw Daiya in a breadand-mushroom panade — again, I was impressed. The cheddar was a little more over the top in the flavor department, delivering a surprising punch that tasted like Velveeta. We made a Mexican pizza with it and it was a little much — but would have been great in a mac ’n’ cheese.

In searching for good cheese alternatives, creamy, spreadable “cheeses” seemed to be a safe bet. I was shocked by how addictive all of the We Can’t Say It’s Cheese spreadable cheeses were. I picked up their Cheddar-style Spread and Hickory-Smoked Cheddar-Style Spread at Rosauers on 29th and was totally shocked at how tasty they were on everything. Crackers.

Sandwiches. Tortillas. Chips. And, oddly, all of spreads are made from oats. And they taste like cheese. Weird. If for some reason I couldn’t eat cheese any more, this stuff would definitely become a cornerstone of my diet. Tofutti cream cheese and sour cream were both spot-on with the flavor of the real stuff — I’m sure I could sneak either of them to an unwilling vegan cheese consumer and they’d have no idea.

The fake cheese I saw most often — at Safeway, Rosauers, Yoke’s, Huckleberry’s — was the Follow Your Heart brand of fake cheddar, mozzarella and nacho cheese. I bought a block of the fluorescent-orange cheddar and was disgusted by it from the time I opened the package. It glistened and had a terrible odor. And when I cut it, no pressure was needed. A knife fell through its sponge-y texture easily, making it even grosser. The taste was nothing like cheddar. The package boasts that “it melts!” — I didn’t test it though. One taste and I threw the entire block in the garbage.

Though not vegan (it contains a milk product called casein), the Lisanatti Almond Garlic & Herb style cheese alternative surprised me with its peppery flavor and toothsome texture. You’ll see it as often as the Tofutti brand in stores, and it’s definitely superior. I ate a few piectures by it self — and wasn’t blown away, but didn’t throw it in the garbage like the Follow Your Heart stuff. However, on the way back to the fridge, I dropped it and was slightly grossed out by how high off the ground the block bounced. Ew.

The brands don’t end at the grocery store: Online, you can find Dr. Cow Aged Cheeses made from cashews, the Daiya-like Teese Cheese, and the Edam, Gouda and Cheshire-style Sheese.

Though I’m sure none of them taste like the real thing, I’m finding that I’m uncontrollably drawn to finding the one fake cheese out there that tastes like the real thing. It’s a strange obsession, I know, this search for a fake-cheese taste grail. But the day your lactase enzymes vanish, you’ll thank me.