If it could talk, it could tell stories of three generations, along with a lot of griping from neighbors 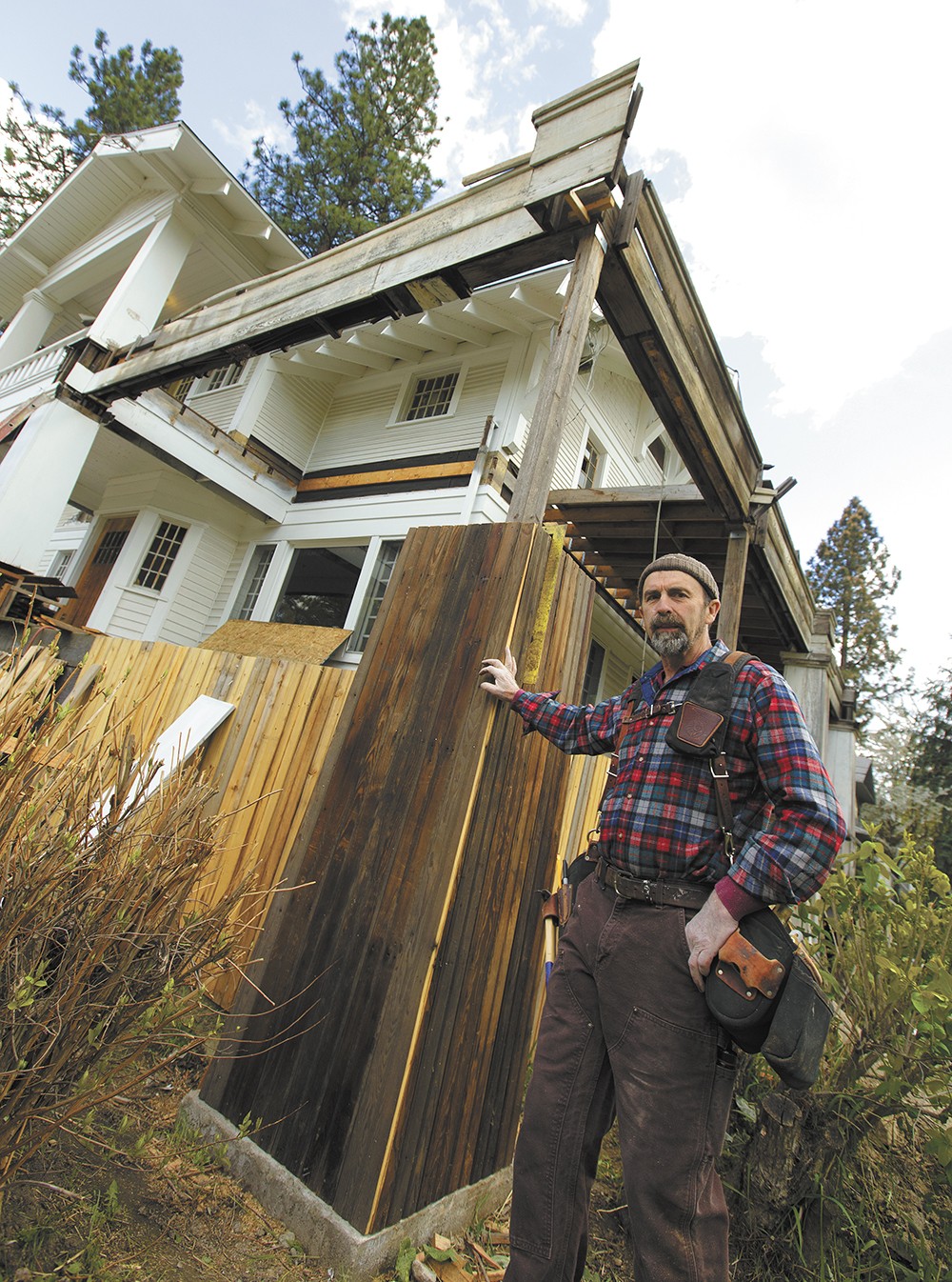 Young Kwak
Henry Pierce III next to a Spokane house that's been in his family for three generations.

Sometimes Henry Pierce thinks about tearing down the house

that's been in his family for nearly a century. He thinks about pulling down the weather-beaten pilasters, the porch that's become littered with lumber and the remnants of the balcony that have become charcoal gray and stand in contrast to the white siding that lines the walls, interrupted by the black tar paper used to patch up a hole.

But he won't. Instead, he continues to chip away at restoring the house to how it looked nearly a century ago. He dreams of a day when the house is restored and placed on the Spokane Register of Historic Places, perhaps even becoming a place where families taking their children to the Shriners Hospital, which his grandfather helped found, can stay for free.

He also dreams of a day when people will stop complaining about the house and the city stops placing liens on it.

Pierce doesn't know when his dream will become reality. Neither do his neighbors, some of whom have complained for years that the house stands out as a property-devaluing eyesore in an otherwise tidy South Hill neighborhood.

The house has caught the attention of the local neighborhood council. The two members of city council who represent the area have consistently heard complaints about it since being elected. For nearly a decade, Spokane Neighborhood Services has been using carrots and sticks to goad Pierce into finishing the restoration since he took ownership of the house. The situation reveals the tense balancing act the city is tasked with in handling the competing rights of property owners. Now, an end to the saga could be in sight.

In 1921, Pierce's grandfather and namesake

purchased a two-story, Craftsman-style house in the Cliff/Cannon Neighborhood. He became editor of the now-defunct Spokane Daily Chronicle and served as chairman of the board for the Shriners Hospital for Crippled Children. He left the house to Henry Pierce Jr. after passing away in 1959.

Neighbors remember the elder Pierce as a kind eccentric, a father of two who built a carefully engineered seesaw that could hold an adult and child and a miniature choo-choo train in his front yard that he used to give neighborhood kids rides on.

But as he grew older, the house started to decline. The foundation sank. A tarp covered the battered roof. The porch sagged. A hole on the house's north side let the elements in. Neighbors say someone stole the miniature train, and an old car, piles of lumber, bricks and other "junk" amassed at the property. In 2009, Pierce died. His son, Henry Pierce III, took over the property and all of its problems.

"I think about this every single day," say Pierce, adding that "it would relieve a lot of pressure on my soul" if he could fix up the property to the satisfaction of city code enforcement and those who live nearby.

An affable 60-year-old who works as a contractor and property manager, Pierce says he's sunk $200,000 into what he calls a money-losing project. He's fixed the roof, hoisted the foundation with a support beam, pulled out rubble from the basement, done some work on the porch and given it a fresh coat of paint — all of which he's done with little help. But despite all this work, the house remains dilapidated, with no heat and no water.

Some neighbors, such as Dia Maurer, who has lived down the block for two years, cut Pierce some slack. Maurer says she gives credit to Pierce for the progress he's made, considering the restoration is a large, expensive project, but she would still like to see it completed. Other residents, however, aren't as forgiving.

Bradley Bleck says the house has been a "disaster" since he moved to the neighborhood in 2001. He says that Pierce has made some progress, but it's been slow and calls the idea of it being restored a "pipe dream."

"If I knew a nice house would be built there, I wouldn't mind it if it burnt down," says Bleck.

Robert Herold, a Gonzaga University political science professor and Inlander commentator who has lived across the street from the house for more than 30 years, began filing complaints to the city about its condition in the mid-1990s, which he says has accomplished little.

In February, the Cliff/Cannon Neighborhood Council held a meeting at the Woman's Club of Spokane to talk about "addressing problem properties." Patricia Hansen, who chaired the meeting, attempted not to single out anyone's property, but frustrations with Pierce, who had showed up grinning to hand out fliers about the restoration of the house, were evident.

"From a neighborhood council point of view," says Judy Gardner, who left the meeting irked, "there hasn't been any follow-up from the city or from Henry."

In Spokane, if someone complains

about the condition of a house, code enforcement will take a look. If they determine it's substandard, it's placed in the "Building Official process," with its owner given a list of things that need fixing, along with being assessed a $1,500 fee for each year it stays in the process.

According to a code enforcement report from December, Pierce's house was first reported dilapidated to the city in 2006. The next year, it was placed in the Building Official process, according to Heather Trautman, director of Neighborhood Services and Code Enforcement, and has remained there since. Trautman says Pierce has made enough progress to avoid more drastic measures, such as demolition or the city performing the work and sending him the bill, but not enough to be released from the process.

"Ultimately, it still comes down to private property," says City Councilman Mike Allen, who since being appointed to the council in 2007 has heard complaints about the house from perplexed residents who don't understand why the property has remained in this condition for so long. "He can continue to bounce along and do the absolute minimum, and he'll do fine with the retention of his property."

In the meantime, Pierce's unpaid $1,500 fees have become liens. According to Spokane County records, Pierce has been delinquent on his property taxes since 2012, owing, along with liens, $7,661.49. If a property owner remains delinquent for three years, the county will begin foreclosure proceedings.

Pierce isn't giving up. He's working on having the house nominated to be included on the Register of Historic Places. If it's accepted, he'll get a property tax break while he finishes the restoration, which must be completed within two years. But Pierce says his goal isn't cheap taxes.

"I want it done myself," he says of the work. "I want to alleviate as much aesthetic pain for my neighborhors as possible." ♦