Neither Peggy Springer nor Bruce Colquhoun knew a lot about the Spokane Symphony Associates before they became involved. Both were open to spending a few hours volunteering for a worthwhile cause here and there, ideally with the added benefit of socializing with friendly folks. But when it came specifically to the SSA, they're the first to admit that their joining was more or less coincidental.

For Colquhoun, it began with a move from Muncie, Indiana, where he and his wife enjoyed attending concerts by the Ball State Symphony Orchestra. Following their relocation to Spokane in 2011 he found himself with some free time and a desire to reconnect to classical music.

"After I'd been here a couple of years, I kind of got bored with what I was doing," he says. "I went to the symphony website and just happened to be noodling around. I was clicking on the tabs, and all of a sudden here's one that said, 'Volunteer,' so I clicked on that and up came the SSA. I said, 'Hmm, this sounds like fun.'" He was soon attending his first meeting.

As for Springer, everything started when a friend of a friend asked her to help put together a display for a new-ish fundraiser known as Christmas Tree Elegance. That was in 1985, when the annual event had only been running for two years.

Today, Springer is the treasurer and driving force behind the organization's internal e-newsletter, which has kept its members connected amid the pandemic. She and Colquhoun have decades of involvement in the SSA between them and, in Springer's words, "been just about everything" when it comes to titles and roles. In fact, Springer is a two-time past SSA president, and Colquhoun is the current one.

To think that they were ever unaware of the scope and workings of this 275-member organization now seems a little strange to them, but it's not surprising. The Spokane Symphony Associates are a quiet powerhouse, operating behind the scenes and yet in plain sight.

Maybe the most obvious example of that is Christmas Tree Elegance. Ask any Spokanite and they're almost certain to have heard of it. For many, buying a $1 raffle ticket (or two or three) in hopes of winning one of the dozen or so $5,000 themed gift packages has become a holiday ritual — one that brings in upward of $400,000 for the Spokane Symphony each year. But they're also likely to be a little hazy on who exactly organizes the event and why.

"Even though we have a 12-foot banner behind the ticket table, people will come up and say, 'Now, what's this for?'" Colquhoun chuckles. "For whatever reason, there's still a lot of people who don't make the connection."

To some extent, the same could be said of the organization's Upscale Sale, which launched in 2007 and is still working toward the same prominence as Christmas Tree Elegance.

"It's like a large estate sale," he explains. "We take donations year-round, store them up, and then we rent out a retail space and set up a bunch of tables. We do furniture, glassware, china plates, knickknacks, clothing, books, CDs, art, just about anything you can name short of exercise equipment. And it's basically priced to sell."

In its first year, the Upscale Sale brought in a respectable $5,000. By 2018, it was generating over $60,000. Even during COVID-19, when in-person events have been mostly on hold, the SSA capitalized on two years' worth of Upscale Sale donations to hit the $130,000 mark. That money helped sustain the symphony at a time when revenue had plummeted.

ithout hyperbole, the Spokane Symphony Associates are on record as one of the most proficient, prolific supporters of any orchestra in the United States. That's just on a pure dollar basis. And when you factor in the proportionality of money raised as a function of our budget, they very well might be the most prolific," says Spokane Symphony Executive Director Jeff vom Saal.
click to enlarge 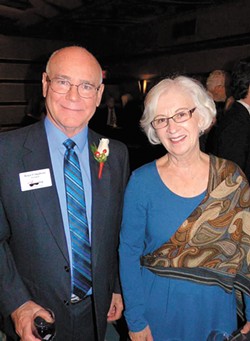 ABOVE: Bruce Colquhoun and Peggy Springer

Since 2000, the SSA has handed the symphony over $4.5 million. And while the SSA's unrestricted funds are a huge boon to the symphony's operating budget at any time, the nonprofit organization represents far more than just a key donor. Its volunteers are active both front and back of house, handing out programs, organizing refreshments and lending a hand wherever one is needed.

"Internally, they have a powerful, palpable, meaningful, positive, durable influence on the morale of this place," vom Saal says. "Especially right now when we're down on staff, the SSA folks came in and helped organize the library. Even things like checking in musicians for rehearsals and doing the coronavirus questionnaire that we have to do. That's been them all year long. You don't have to go very far to find SSA, either person or chapter, making sure that things are going right."

That even applies to important decision-making processes. When Music Director James Lowe came to Spokane to interview in 2019, he found himself in front of a panel of SSA members.

"They said, 'What's your experience in working with similar organizations to ours?' And I had to say, "Well, there aren't any similar organizations to yours! You're absolutely unique,'" he says. "They raise as much for us as our endowment does every year. It's astonishing. And any time we need a volunteer for anything, there's 10 or 15 Spokane Symphony Associates there. They are the lifeblood of this organization, and they epitomize this great community spirit."

Locally the SSA might fly slightly under the radar, but within the Spokane Symphony proper, it's recognized more formally through a presence on the Board of Trustees and on advisory groups. Among its peers on the national stage, the group has been lauded as a model nonprofit support organization with regular awards and a frequent seat on the Volunteer Council of the League of American Orchestras.

Unsurprisingly, Springer has served on that body, too. What makes it worthwhile for her, though, is the grassroots, shoulder-to-shoulder activity in the service of one of Spokane's leading cultural institutions — and the friendships forged in the process.

"We support the symphony with love and with fun. If we didn't have fun, we wouldn't have nearly as many members as we do," she says. "Our vision statement is to see a thriving symphony for the city for years to come, and all of us feel that if we can support that vision, we're pleased. It's a great way to volunteer and to know that you're appreciated." ♦

[Editor's note: James Colquhoun's name was misspelled in the print edition has been corrected in the online version of this story.]