A recent study says that watching critically acclaimed TV makes us more emotionally intelligent, but not everyone is convinced 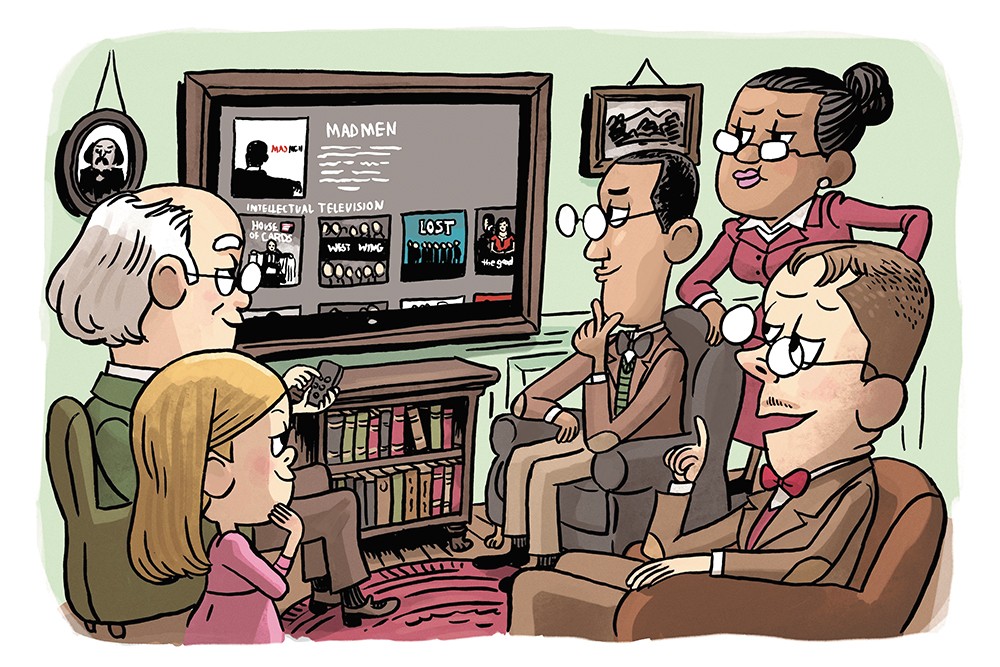 Whether you religiously watch Fargo or Keeping Up with the Kardashians, we'd all like to believe that our favorite TV shows make us cooler and better than other people who don't watch them. But what if watching TV also could make you smarter? A study published in the journal Psychology of Aesthetics, Creativity, and the Arts by two psychologists at the University of Oklahoma suggests that watching prestige television (sorry, Kardashian lovers) heightens one's ability to perceive others' emotions.

This isn't the first study to suggest that watching TV can offer benefits — a 2013 Washington State University professor's co-study said that watching crime dramas like NCIS would make you more likely to step in to help if you witnessed a sexual assault — but this is the first study to suggest that the medium of television can improve people's "theory of mind," which the study defines as "the ability to interpret the mental states and emotions of others." That same idea was already associated with literary fiction, often seen as a superior form of entertainment to TV or film, but researchers Jessica Black and Jennifer Barnes supposed that TV could also measure up to the same scrutiny.

"By forcing readers to view the world subjectively through these different perspectives, by presenting complicated characters whose mental lives can be difficult to perceive — these are not intrinsically tied to the written form. Rather, they reflect the complexity of the characters presented and the degree to which the audience is forced to work to construct their own understanding of those characters," Black and Barnes supposed in their hypothesis.

The researchers ran their relatively small study twice, each time with about 100 students.

Here's what they did: Students were split into three smaller groups. One group watched an episode of "high-end" TV (Mad Men, West Wing, Lost or The Good Wife), another watched a documentary (How the Universe Works, Shark Week, Nova or Through the Wormhole) and the last group didn't watch anything. Then each group was given a test that measured ability to interpret facial expressions. Those who watched the dramas did notably better than those in the other two groups. Females excelled more than males on the test.

"I wish this was all sound research," says Monica Bartlett, associate professor and chair of the psychology department at Gonzaga University. "I think the studies are majorly flawed. There's a million variables, and that's part of the problem. I think it's still up for question."

Black and Barnes do note that there is much room for future research; for example, if having test subjects watch over-the-top dramas, critically acclaimed comedies or trashy reality TV would produce the same results.

The Inlander's own TV critic, Daniel Walters, says that this study's findings don't surprise him in the least. But he counters that it's not just prestige TV that can make people more cognizant of others' emotions. Instead, it's the acting. For instance, Viola Davis' standout performance on the soapy Shonda Rhimes vehicle How to Get Away with Murder is so riveting, you have to pay attention to everything she's doing on-screen to catch the nuances.

Dan Merchant, the co-executive producer/writer/director of Z Nation, which is filmed in Spokane, is the first to admit that his show about a zombie apocalypse is not highbrow.

"In the industry, they call Z Nation a genre show or science fiction, and it's clearly that. We consider it an entertaining show; we're just trying to make a fun hour of television," says Merchant, currently working the postproduction side of season two. "But one thing we do try to get out of people is empathy."

Merchant, a filmmaker from Portland, says that good stories help people to understand other people. Z Nation is that kind of show, Merchant says.

"I think it has to do with our legitimate emotions in the show," he says. "It's a heightened [fictitious] situation here, but it's still dilemmas that we're working with that cause viewers to think and feel."

Of course, an even better way to experience human emotion is to hang out with real-life people.

"It's just about everything in moderation," Bartlett says. "I don't believe that TV is all bad."

The 2005 book Everything Bad is Good for You by Steven Johnson even suggested that the intricacies of today's TV shows could make people smarter than shows from decades ago. These ideas aren't all so new. Black and Barnes' study may be a step in the right direction, but it's still too early to announce to your friends that binge-watching Breaking Bad makes you smarter. ♦