Ida Dempsey via The New York Times
A photo provided by Ida Dempsey shows people fleeing wildfires around coastal Mallacoota, Australia, by boat on Tuesday, Dec. 31, 2019. Dempsey, a resident of Melbourne who spends Christmas every year in the area with her family, commended fire officials for keeping people calm.
By Isabella Kwai
The New York Times Company

SYDNEY — As the fire stalked toward the coastal town of Mallacoota, the daytime sky turned inky black, then blood red. Emergency sirens wailed, replaced later by the thunder of gas explosions. Thousands of residents fled their homes and huddled near the shore. There was nowhere else to go.

On the last day of the warmest decade on record in Australia, the country’s east coast was dotted on Tuesday with apocalyptic scenes like the ones in Mallacoota, a vacation destination between Sydney and Melbourne.

Australia is in the grip of a devastating fire season, with months of summer still to go, as record-breaking temperatures, strong winds and prolonged drought have ignited huge blazes across the country.

In the state of New South Wales, which includes Sydney, more than 900 homes have been destroyed and 9 million acres have burned since November. About 100 fires are currently raging in the state, with about three dozen more across the border in Victoria. At least 11 people have died.

Australia, the most arid inhabited continent, is uniquely vulnerable among developed nations to the effects of global warming, scientists say. The country recently concluded its driest spring on record. That was followed in mid-December by the hottest day on record, with average highs across the country of 41.9 degrees Celsius (107.4 degrees Fahrenheit).

The catastrophic fire conditions have put an intense focus on the Australian government’s failure to abide by its promises to reduce carbon emissions. Prime Minister Scott Morrison, a conservative, has made it clear that Australia’s economic prosperity comes first. Even as his country burned, he has said repeatedly that it is not the time to discuss climate policy. 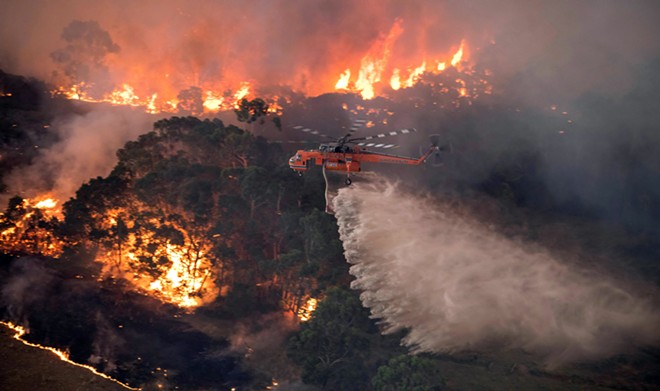 State Government of Victoria via The New York Times
A photo provided by the State Government of Victoria, Australia, shows a helicopter dumping water on a wildfire near Bairnsdale on Tuesday, Dec. 31, 2019. The country’s east coast is dotted with apocalyptic scenes on the last day of the warmest decade on record in Australia.
The fires have been a constant presence in Australia for weeks, but the eerie images that emerged on social media on Tuesday cast them in a new light, and seemed to be a harbinger for the new decade that the country rang in hours later.
In Mallacoota, residents in boats shared footage of themselves wearing masks and life vests as they waited under the blazing red sky. Others opted to stay and defend homes.

With several blazes burning out of control, thousands were stranded in evacuation centers in other towns along the coast as firefighters told people to stay put. Tens of thousands of people were without power, the Australian military was authorized to deploy aircraft and naval vessels, and the government requested firefighting help from Canada and the United States.