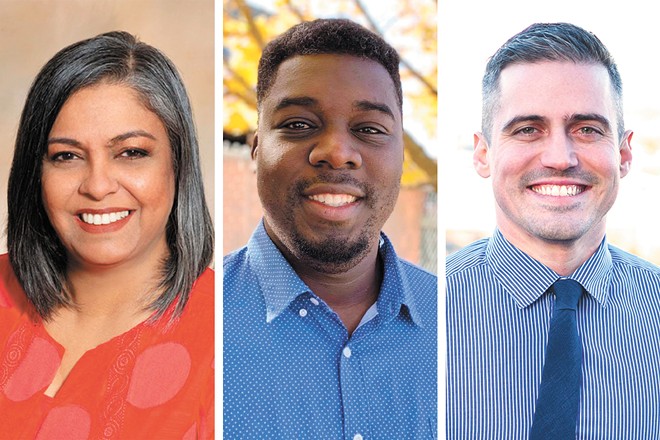 Three candidates across the political spectrum are vying for the Spokane City Council position being vacated by progressive Councilwoman Kate Burke.

Jonathan Bingle, Luc Jasmin III and Naghmana Sherazi each hopes to take the seat in District 1, which has elected conservatives and progressives to its officially nonpartisan seats in the past. The district covers the portion of the city generally north of Interstate 90 and east of Division Street, including neighborhoods such as Hillyard, Chief Garry Park and Nevada-Lidgerwood.

The Aug. 3 primary election will determine which two top vote-getting candidates move on to the general election in November.

This would be the first time holding elected office for all of the candidates, though each has an extensive background working in the community and building relationships in Spokane.

They all feel the northeast part of the city has been neglected, and each hopes to address disparities in what are some of the poorest zip codes in the state. But they differ in how they think the city should move forward.

All three spoke with the Inlander to talk about what they see as the most pressing issues facing the city and what they hope to accomplish if elected. (Shared in reverse alphabetical order).

With endorsements from progressive organizations and politicians, including outgoing seat holder Burke, NAGHMANA SHERAZI hopes her second run at a City Council seat in the district will gain her a spot on the council.


She first ran for council in 2019, coming in third among seven candidates in the primary. That race was ultimately won by current conservative Councilman Michael Cathcart.

For Sherazi, who moved to the U.S. from Pakistan around 2008, the election was a major milestone: In November 2018, she became a naturalized citizen, by December she'd been asked to consider running for office, and by March 2019, she'd filed to run.

So in the very first election she was able to vote in, Sherazi was also able to cast a vote for herself.

"My son who'd just turned 18 also got to vote for the first time and voted for his mother," Sherazi says. "That's how the democratic process is so enabling."

After first moving to Texas to be with family while leaving an abusive longtime marriage, she studied to become a cytogenetic technologist, all while raising her son as a single mother. Those efforts ultimately led to a job in Spokane in 2012.

However, soon after she got on her feet here, that company folded. Sherazi says she had to scramble to make ends meet, sometimes working two or three jobs, and she continues to understand the realities of living paycheck to paycheck as a renter in the city.

She now participates in many organizations, including Peace and Justice Action League of Spokane, Spokane Coalition of Color, and Muslims for Community Action and Support, and works as a communications coordinator for Gonzaga University's Office of Diversity, Equity and Inclusion.

"These are the stories I'm telling people at the doors; they connect with that," Sherazi says. "They understand women, immigrants of color, we are used to working three times harder than our White counterparts. I'm going to bring that work ethic with me to Spokane City Council."

Sherazi doesn't think the northeast has been treated fairly, specifically noting that it's the district with the most unpaved roads.

"First and foremost we need to pave all the streets and roads," she says.

She also thinks the city may need to look at zoning changes not only in the northeast, but throughout business districts where the council could allow for more residential infill atop retail space as the crunch for housing continues.

"We really need to make sure people are living and working close to amenities," she says.

She would also like to see an expansion of public transportation, suggesting a peripheral bus route or loop around the city that could connect with the Central City Line to help with increasing commuting constraints as the city grows.

As for homelessness, she says the city needs to supply adequate shelter space before extreme hot or cold events.

"We need to stop chasing the weather, we need to make sure we have shelter in place," Sherazi says.

Ultimately, she says she's running for council to ensure District 1 gets its fair share "and to bring all the needs and voices of our constituents forward.

"It doesn't matter to me what religion or party you belong to, all I care is that we are represented properly on City Council," Sherazi says. "Representation truly, truly does matter."

'I GET THINGS DONE'

As another progressive contender — endorsed by leaders like state Sen. Andy Billig — LUC JASMIN is hopeful his longtime involvement in the local education system at the local, state and federal level will help capture voters' trust to represent their interests on the council.


Jasmin moved to Spokane about 15 years ago from Boston with his then-wife and moved into District 1, where he's lived ever since. He has two young daughters.

Trained as an elementary educator, Jasmin is the co-owner of Parkview Early Learning Center and is passionate about education. In addition to Parkview, he helped open a child care center that supports Lumen High School, a public charter school for teen mothers in downtown Spokane.

As president of the grassroots Washington Childcare Centers Association, he also helped pass the Fair Start for Kids Act in the state Legislature this year to help fund early childhood education.

"One of the main reasons I'm running is because I get things done," Jasmin says. "When I talk to the residents of the northeast, that's what they want to see."

He says the city can help connect businesses with child care providers to offer more on-site options, which could help some companies that are struggling to find new hires after the pandemic required many people to stay home to watch their children.

The three issues he sees as most pressing for the city right now are housing, infrastructure and safety.

For infrastructure, he points out that broadband internet access is seeing a major push across the country, and that type of access could strongly benefit the neighborhoods in District 1.

Unpaved streets there are also a widespread concern he's heard from residents.

As for safety, Jasmin serves on the police ombudsman's commission and says he'd like to see the ombudsman given true independent oversight of the police department, as voters have indicated they want.

He'd also like to see the council support more community programs that will encourage people from Spokane to become officers, "to help grow law enforcement that look like and are from our neighborhoods."

Overall, he wants to ensure more is done for the northeast.

"We really need a lot of investments," Jasmin says. "I want to make sure that people in my district get their fair share of city services."

He's heard frustration at the neighborhood council level about neighborhood plans that people spent many hours creating, only to feel like they're not resulting in actual changes or projects.

"These people spend so much time and effort and energy developing that," he says. "We need to honor that."

Jasmin also notes that District 1 has historically had the lowest voter turnout in the city. He thinks part of that is due to people not feeling like their votes are leading to real change.

"I want them to see the wins I'm able to get and know that we will get our voices heard," Jasmin says. "I want to magnify voices."


Originally from Spokane, Bingle says he basically grew up at Friendship Park, later attending Rogers High School and then Spokane Falls Community College before starting his own business. He and his wife own Bent Trivia, an entertainment company that was put on hold during the pandemic with restaurants and bars largely closed.

Bingle, who previously served as a pastor at Genesis Church for a decade, started working as a general contractor remodeling homes over the last year to support his young family. (They have a 15-month-old son.) But he hopes to see trivia take off again soon.

Public safety, homelessness and housing are the three issues Bingle says are most pressing for the northeast.

"We have some members of the City Council that I believe would and are actively working to defund the police," Bingle says. "People in our area do not want that. ... They want a very fully staffed police force. They know property crimes often go unchecked because we do not have the bodies in the police force to pursue criminals along those lines."

Bingle says often when people bring up homelessness, "they're talking about chronic homelessness or the vagrants in the city."

He says most people he talks to don't have an issue with helping people who've temporarily become homeless due to difficult circumstances. But it's different when it comes to people who are chronically homeless, many of whom, he says, are addicted to substances or are mentally ill.

"With really good intentions, we've established some really bad policies," Bingle says. "We've treated it like it's a housing problem. It's not."

He says he thinks the struggle to get into treatment or to appointments is not due to their current living situation, but because of their choices or lack of agency due to their addiction or mental health.

"By only supporting low-barrier shelters, all we're doing is concentrating this homelessness into these shelters," Bingle says. "You need to require things of them, need to see them taking steps along that track to moving toward healing. Right now they're broken."

He suggests the city could help expand state laws that enable involuntary treatment.

For housing, Bingle says the city's centers and corridors plan, which lays out where denser housing developments should be built, is good in theory, but it hasn't been put into practice.

"That has to do with the bad votes from the City Council," Bingle says. "If you tell people, 'This is the only place you can build' and then vote down every development, we're not going to be able to build to the level we need to handle the population."

He points to major apartment complexes that were planned in Indian Trail and on the South Hill that the council voted down, despite their location within those centers and corridors. Among his campaign promises is that he'll "bring back common sense to the City Council."

"Common sense is saying we may have a plan for it, but we need to be flexible enough to understand the needs of the community and then adapt to it," Bingle says. ♦

County Commissioner District 1: A lawyer and a businesswoman see different paths to "accountability"